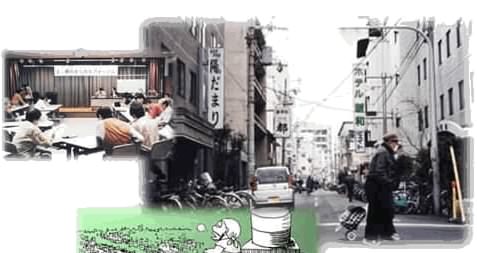 Homeless issues in Japan
Since 1990s the number of rough sleepers in Japan has been increasing.
According to the survey conducted in large cities in the country from 1998
to 2000, the number reached to approximately 20,000. In recent years, rough
sleepers can be seen in provincial cities or even in smaller cities; thus,
the actual number should be much more than 20,000. Also we should note
that the survey only counted those who sleep on streets, in parks, and
along riversides; this attributes to the terminological difference—meaning
of "homeless"—between Japanese and English. In Japanese, "homeless"
does not include those who are about to be evicted from their houses and
those who live in the houses in inappropriate condition.
One of the distinct characteristics on Japanese homeless is that single
middle-aged men are the majority; this fact is deeply associated with "yoseba
". According to the surveys done by Tokyo Metropolitan Government and
Osaka City Government, most of rough sleepers used to stay at "yoseba"
and the majority were employed in the construction industry. During the
60s to 70s—a time of intensive economic growth in Japan, numerous day
laborers gathered from all over the country. When economic stagnation
arrived in the late 1980s and 1990s, those day laborers became
"homeless"—unable to pay for staying at doss-houses. Today, aged
and/or diseased laborers who are unable to work have no choice but to
live on streets or in parks.
Location / Population / Area
Kamagasaki is a distinctive laborers’ community which locates itself in
the middle of Osaka City -Nishinari Ward- and houses approximately 20,000
single day laborers with around 190 cheap lodging houses . (Map of Osaka
City, Vicinity map for Airin District, Table 1)

History and Recent Situation
Kamagasaki originates in Nago Town
(Naga Town) known as a yoseba from the early Edo Era and a slum area
from pre-modern times; Nago Town moved to Kamagasaki in the occasion of
the 5th Domestic Industrial Exhibition in 1903. Kamagasaki once
vanished after the air raid on Osaka; however, it restarted as a black
market and the massive yoseba, as it is today, was formed during the
time of intensive economic growth. Kamagasaki functioned as the
laborers’ market to support Japanese economy (especially for the
construction industry) at least till 1991 when bubble economy ended,
even through there were many problems.
However in the post-bubble economy years, economic recession and aging
of the laborers (average 55 years old) resulted in several thousand
rough sleepers around the area. Around half of the estimated 12,000
rough sleepers covering the area of Osaka City seem to have had
experience as day laborers in Kamagasaki.
There were other problems related to the increase of rough sleepers.
For instance, the anonymous death toll and prevalence rates for
tuberculosis in Kamagasaki are much higher than for other places; also
there were problems such as alcohol dependency and drug dependency.
Besides, degradation of the local environment and decline of the local
economy from low consumption rate are serious problems in the area.

Yoseba: Where day laborers seek for their daily jobs to get
hired. The term "Yoseba" originally came from "Ninsoku Yoseba" at
Ishikawa-island in Edo (Tokyo), known as the shelter (or rehab center)
for rough sleepers and later also for petty criminals to rehabilitate
established in 1790.
There are ways to categorize yosebas as follows: Ones developed from
traditional slums (Kamagasaki in Osaka, San’ya in Tokyo etc.) and ones
newly developed after World War II (Kotobuki Town in Yokohama, Sasajima
in Nagoya etc.). There are also yosebas that have flophouse quarters
(Kamagasaki, San’ya, Kotobuki Town etc.) and ones that do not (Sasajima
etc.).

Cheap lodging houses: Cheap and simple hotels based on hotel
business law used as semi-permanent lodging for day laborers. Day
laborers call them as "Doya". In San’ya (Tokyo), there are quite a few
large-scale bedhouses; on the other hand, in Kamagasaki (Osaka) most
doyas were rebuilt into high-rise and modern budget hotels during the
time of bubble economy. In the latter cases, around 70% rooms are
private rooms occupying less then 5㎡ and each room furnishes an air
conditioner and a TV. Also the budget hotels have a big shared bath and
an elevator. The average fee to stay one night is around 1,500 yen;
recently there are some places drop the price into about 1,000 yen

The History of Kamagasaki (Illustrated story)

If it is an urgent mail, please send to:

What does your NPO do?
We
support not only homeless people but individuals on the edge as well.
Many have lost their job because of the economic downturn, or other
reasons. If using the broader classification of homeless, there’s
probably 10,000 in Osaka. Our area is Kamagasaki, inside Osaka city.
It’s a laborer’s town.

What kind of employment program do you offer?
Mainly
we register individuals for jobs. Last year we operated under the
national budget; this year the money comes from Osaka prefecture and
Osaka city. That change means our budget was cut from 900,000,000 yen
to about 700,000,000 yen. This is a significant slash. With the amount
of money we have available only 199 individuals can work. Most homeless
make 30,000 yen a month, on average.

Do they receive food handouts?
Some
Christian and other groups give out food in parks. Convenient stores
and restaurants like McDonald’s donate old food. It’s perfectly edible
but past the selling date. There are quite a few convenient stores in
Osaka. That helps. In some cases they sell the old food really cheap,
like just 100 yen.

Why do the homeless become homeless, in general?
In
America and Europe I often hear that drugs are a big problem with
homeless. In Japan it’s quite different. There isn’t a drug problem.

Alcohol?
There
is alcoholism but the number is not high. The main reason is economic,
the bubble burst. The situation changed dramatically in the 1970s. Many
salarymen lost their jobs and were left with inadequate funds,
inadequate pensions. When people are on the edge of homelessness it
doesn’t take much—an illness, an injury, a personal problem. This is
the mistake of the government, to not have programs in place to take
care of them. If the government could create jobs, they’d all want to
work. With globalization the companies are pulling out. In Japan now
there are no large factories. Middle aged people have no places to
work. Even when there is a modern factory now, where they used to
employ 500 workers, no they only hire 100 due to mechanization.

It’s often said that homeless choose that lifestyle. To what extent is that true?
It’s
a rationalization. Most people want to blame the victim. The cause of
homelessness lack of employment. People want to be in charge of their
own lives so many would rather eke out a living on the streets rather
than take handouts. The interviewers don’t look at the causes of
homelessness.

For a personal question, why did you want to do this job?
I
didn’t want to do it! (laughs) I started living here in 1976 while
working as a day laborer myself. That work is too hard. The main reason
I got the job was because I knew bookkeeping. Others didn’t have that
experience so I got the job by default (laughs).

Are you satisfied?
I can’t say I am. The problems aren’t being solved unfortunately. Many homeless are dying.

What about the future?
I
want to quit (laughs). I’d like to see the problems solved soon so the
homeless can live a better life. The thinking of the entire society has
to change. People need to understand that there just aren’t jobs. It’s
a problem of how the tax money is used.

The
food bank provides food to not only the homeless but struggling single
parents and others in need. They also work to find long-term solutions
to poverty and homelessness. Information is available at the website
above and through Tengu Natural Foods, distributer of organic foods in
Japan.

And some more Homeless Links