10 Years After Iraq War Logs, It's Impunity for War Criminals, War on Whistleblowers

WikiLeaks founder Julian Assange and whistleblower Chelsea Manning have both paid a tremendous price for revealing U.S. and allied war crimes while the planners and perpetrators face no consequences. 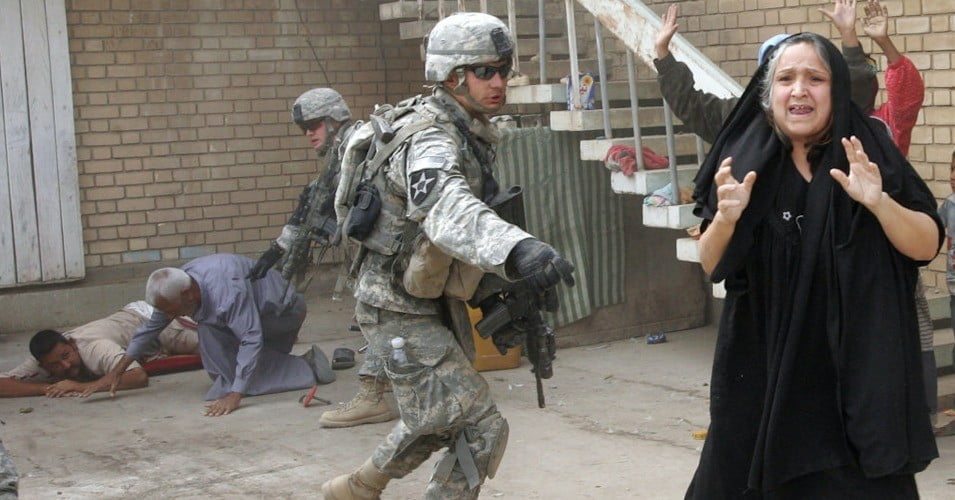 U.S. troops terrorize an Iraqi woman while searching her husband and son near Baquba on October 5, 2007. (Photo: Alexander Nemenov/AFP/Getty Images)

It was the largest leak in U.S. military history and a stunned world demanded justice. However, in the decade since then, only the whistleblowers who revealed the crimes detailed in the logs were ever seriously punished, while the architects and the perpetrators of the atrocities continue to enjoy impunity.

The publication of the Iraq War Logs was the culmination of a year full of WikiLeaks revelations regarding U.S. and allied conduct during the so-called War on Terror. Early in the year, U.S. Army intelligence analyst Chelsea Manning leaked the “Collateral Murder” video, which shows U.S. Apache attack helicopter crews laughing and joking while massacring a group of Iraqi civilians, including journalists, and shooting children.

None of the Bush or Obama administration officials who planned or executed the illegal war, nor any of the field commanders or even rank-and-file troops connected with any of the crimes revealed in the logs, were ever seriously punished.

The whistleblowers, on the other hand, suffered tremendously for exposing the truth. Both Manning and Assange were charged under the 1917 Espionage Act. Manning was convicted in 2013 and sentenced to 35 years in prison, although her sentence was commuted by President Barack Obama just before he left office in January 2017.

Assange is today imprisoned in Britain’s notorious Belmarsh Prison as he awaits possible extradition to the United States, where he faces up to 175 years behind bars, most likely in a supermax facility a former warden described as a “fate worse than death.”

Both Assange and Manning have suffered abuse that prominent human rights advocates have called torture.

Julian Assange on the power of the accused.

The aggressive prosecution of Manning and Assange is a deliberate attempt to silence would-be whistleblowers, says Marjorie Cohn, professor emerita at Thomas Jefferson School of Law in San Diego and a former president of the National Lawyers Guild.

“The Obama administration charged Chelsea Manning, and the Trump administration indicted and is trying to extradite Julian Assange, in an attempt to punish the messengers to obscure the message and protect the real culprits,” Cohn told Common Dreams. “Their prosecutions are calculated to chill the willingness of would-be whistleblowers to reveal, and journalists and media outlets to publish, material critical of U.S. policy.”

“WikiLeaks’ publication of the Afghan War Logs, however, has led to the opening of a war crimes investigation of U.S. leaders in the International Criminal Court,” Cohn noted.

Asked whether Assange’s prospects for freedom would improve if Democratic presidential nominee Joe Biden defeats President Donald Trump next month, Cohn said that “Biden is more likely to follow Obama’s policy—he refrained from prosecuting Assange because [the administration] couldn’t distinguish between what WikiLeaks did and what what The New York Times, The Guardian, Le Monde, Der Spiegel and El País also did—than Trump’s.”

“Assange’s lawyers think he faces a worse fate if Trump is reelected,” she added.

Cohn said the government hasn’t been successful in silencing whistleblowers as it intended. Although there haven’t been any Mannings, Assanges, or Edward Snowdens of late, “last year a whistleblower in the intelligence community revealed evidence of Trump using the power of his office to solicit foreign interference in the 2020 election. And in May, another whistleblower complained that some federal Covid-19 vaccine contracts were awarded based on political connections.”

“If Assange successfully resists extradition or escapes a conviction if he is extradited to the U.S. for trial, that would encourage future whistleblowers to come forward when they see evidence of criminal government activity,” said Cohn. “That’s one of the reasons it’s so critical to oppose the U.S. government’s persecution of Assange.”

The Iraq War Logs comprised a staggering collection of documents offering an unprecedented inside look at the U.S. war and occupation, then in its eighth year. The bombshell revelations contained in the 391,832 Army field reports showed that:

“The stated aims for going into that war, of improving the human rights situation, improving the rule of law, did not eventuate,” Assange said at the time. “In terms of raw numbers of people arbitrarily killed, [that] worsened the situation in Iraq.”

International media published many of the leaked documents, sparking global outrage and condemnation of the United States and the already tremendously unpopular war. The U.S. corporate media, however, downplayed and whitewashed the American lies and war crimes revealed in the logs and instead focused on revelations of Iranian involvement in Iraq and abuses committed by private contractors and Iraqi forces.

Almost immediately, the U.S. government went into attack mode. Secretary of State Hillary Clinton condemned the release, claiming—apparently without irony—that it “puts the lives of United States and its partners’ service members and civilians at risk.”

Assange rightfully countered that there was no evidence anyone was harmed by the leaks. Regardless, the Australian national was widely condemned in the U.S., with prominent Republicans and others—including a television game show host and businessman named Donald Trump—calling for his execution.

Meanwhile, U.S. military leaders kept on lying. Gen. George Casey insited that U.S. policy “all along was if American soldiers encountered prisoner abuse, to stop it and report it immediately up the U.S. chain of command and up the Iraqi chain of command.”

The horrific torture and abuse at Abu Ghraib prison and throughout Iraq tell a very different—and often deadly—truth.

How Wars, Sanctions, and Militarism Made the Coronavirus Crisis Worse