Vaccines will be supplied to the hundreds of thousands of government-backed illegal Israeli squatters on Palestinian land in the West Bank, but not to the indigenous Palestinian population. 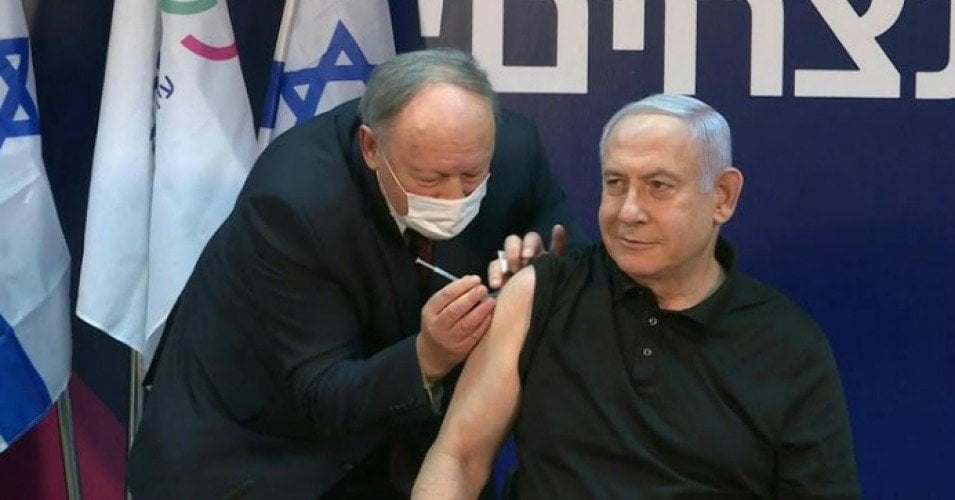 “There are roughly 3 million Palestinians in the Palestinian West Bank, so their 25 deaths are the equivalent of 2,750 American deaths daily, one of the worst rates in the world,” Cole writes. (Photo: AFP/YouTube Screengrab)

Israeli Prime Minister Binyamin Netanyahu received a coronavirus shot on Saturday. He has pledged that the 9 million Israelis will be vaccinated in a matter of months.

Inside Israel, Netanyahu was widely thought to have mishandled the pandemic, and it hurt his popularity as the country goes yet again to the ballot box. He is no doubt hoping that the vaccine will save him. If he loses the next election, he could well go to prison on current corruption charges for which he is being tried.

Vaccines will be supplied to the hundreds of thousands of government-backed illegal Israeli squatters on Palestinian land in the West Bank, but not to the indigenous Palestinian population.

Netanyahu’s government militarily occupies 5 million stateless Palestinians. He has worked with the Mad President Trump to kneecap all international aid to the Palestinians.

Under the Geneva Convention and the Rome Statute, the Occupying power is responsible for the health and well-being of the Occupied peoples, and failing to look after it is a war crime.

Israel’s Deputy Health Minister Yoav Kisch told Kan Radio that Israel was working to attain a surplus of vaccines for Israelis and that “should we see that Israel’s demands have been met and we have additional capability, we will certainly consider helping the Palestinian Authority.

Just consider that it is 1941 and Mussolini is occupying the city of Nice in France. And there is a big pneumonia outbreak. (Pneumonia used to be the third leading cause of death). And Mussolini says, after we take care of all the Aryan Italians, we might think about giving sulfapyridine to the occupied population in Nice, way down the road. In the meantime, the French will just have to die.

What would that sound like to you? That’s the equivalent of what Kisch just said.

The policy enunciated by Kisch is a war crime. The 1949 Geneva Convention on the treatment of occupied populations, which was intended to stop people from acting as the Axis leaders did, has this to say (Article 56):

To the fullest extent of the means available to it, the Occupying Power has the duty of ensuring and maintaining, with the cooperation of national and local authorities, the medical and hospital establishments and services, public health and hygiene in the occupied territory, with particular reference to the adoption and application of the prophylactic and preventive measures necessary to combat the spread of contagious diseases and epidemics. Medical personnel of all categories shall be allowed to carry out their duties.

Meanwhile, the spokesman for Palestine’s health ministry, Kamal Shakhri, is warning of a health care “catastrophe” this winter as coronavirus cases skyrocket toward 2,000 or possibly even 3,000 a day (the US equivalent of 220,000 to 330,000 a day– one of the worst rates in the world).

On Saturday, in the West Bank, the health department in Ramallah reported 1,750 new cases of the coronavirus and 25 deaths.

The office added, “The rate of recovery from the Corona virus in Palestine reached 80.07%, while the rate of active infections reached 18.7%, and the death rate was 0.9% of all infections.”

128 patients are in intensive care units. The bad news is that under Israeli military occupation, the West Bank has been unable to develop economically, suffering billions losses in opportunity costs. There are not that many intensive care units in Palestinian hospitals. I wrote earlier this year:

AFP reports that the two million Palestinians in Gaza only have 60 ICU or intensive care beds, and not all of them are functional. The israeli blockade, which disallows importation of many key goods, has devastated the health care system in the Strip. In Palestine over all, there are only 1.2 hospital beds per 1,000 people. Compare to Germany with 8.3 beds per thousand people.

I suspect a lot of old people are just dying undiagnosed at home.

UNICEF rushed last spring to equip 25 ICUs in the West Bank and Gaza. It isn’t enough.

There are roughly 3 million Palestinians in the Palestinian West Bank, so their 25 deaths are the equivalent of 2,750 American deaths daily, one of the worst rates in the world. If 0.9% of all infections die, and they have over half a million active cases in the territory, we can expect 5,490 to die out of the current situation. But, the situation will get worse, and apparently Israel isn’t planning to bother to get the vaccine into the West Bank for many months.

Israel continues to keep the little Gaza Strip, with a population of 2 million — half of them children — under blockade during the pandemic. California let a lot of its inmates go to avoid a penitentiary mass outbreak, but Palestinians are treated worse than California inmates. Occasionally the Israeli government has even blocked diesel for electricity. Who knows when its people will get the vaccine, or will be permitted to by its Israeli prison guards?

Juan Cole teaches Middle Eastern and South Asian history at the University of Michigan. His newest book, “Muhammad: Prophet of Peace Amid the Clash of Empires” was published in 2020. He is also the author of  “The New Arabs: How the Millennial Generation Is Changing the Middle East“ (2015) and “Napoleon’s Egypt: Invading the Middle East” (2008).  He has appeared widely on television, radio, and on op-ed pages as a commentator on Middle East affairs, and has a regular column at Salon.com. He has written, edited, or translated 14 books and has authored 60 journal articles.