Published on
Saturday, December 12, 2020
by
Inequality.org

The super rich owe their super fortunes to factors that have little to do with their “genius.” 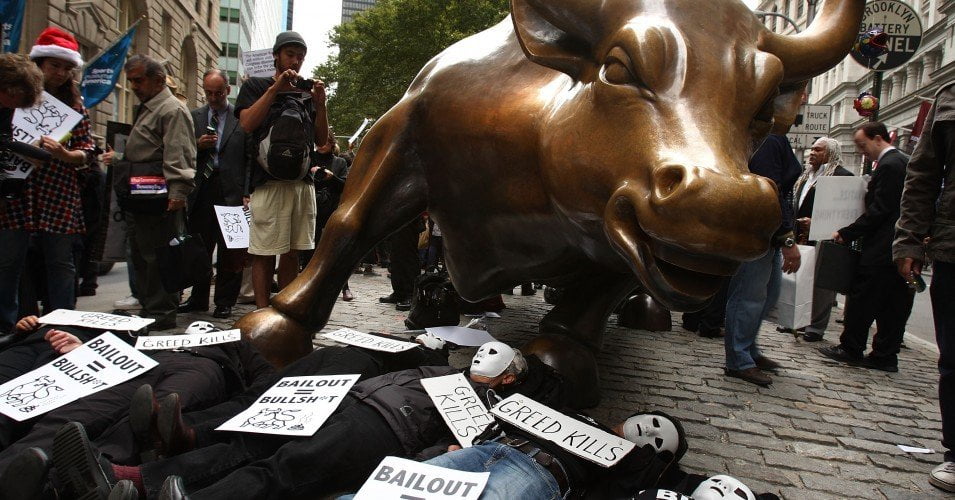 People lay underneath the iconic Wall Street bull during a rally in the financial district against the proposed government buyout of financial firms September 25, 2008 in New York City. (Photo: Spencer Platt/Getty Images)

Myths die hard, especially when the myths in question serve to prop up the legitimacy of the richest among us. And the myth these richest hold dearest: that their grand fortunes represent a fitting reward for smarts and hard work.

CEOs in this country are also making fantastically big bucks. They’ve spent recent decades growing the gap ever wider between what they take home and what their workers earn.

All these billions, business commentators gushed, couldn’t be going to a smarter guy. At age two, Forbes informed us, Russell memorized the periodic table of elements. At age 11, the Wall Street Journal added, he was “building prototype supercomputers and optical-electronics systems.” At age 13, marveled Entrepreneur, Russell filed his first patent.

Four years later, this precocious young man dropped out of Stanford to found Luminar after winning a $100,000 fellowship from PayPal billionaire Peter Thiel. Ever since then, Russell has been fine-tuning “laser sensors that bounce off objects, to give vehicles a three-dimensional view of their surroundings.”

His work, Russell assures us, hasn’t been easy.

“Scaling this up,” he noted after entering America’s billionaire ranks, has “been insanely intense, grueling.”

None of this past week’s coverage about young Russell’s emergence should particularly surprise us. Business commentators are always rushing to find brilliance in billionaires—and billionaires seldom shy from supplying the evidence.

What should surprise us, at least a little bit, turns out to be the rush by a newly named Joe Biden appointee to endorse the heroic claims our captains of industry and their cheerleaders so regularly inflict upon us.

CEOs in this country are also making fantastically big bucks. They’ve spent recent decades growing the gap ever wider between what they take home and what their workers earn. Major chief execs, the Economic Policy Institute calculates, now make 320 times worker pay, up from 21 times worker pay in 1969 and 61 times in 1989.

These CEOs remain exceptionally adverse to any move that might narrow that gap. Walt Disney, for instance, has just announced the layoff of 4,000 employees, on top of the 28,000 layoffs the company announced this past October. This autumnal assault on Disney workers came after the company—in August—gave its top execs a reprieve from pandemic hardship by ending the temporary corona pay cuts the execs accepted last spring.

The same economic insecurity Disney workers now face has become chronic nationwide. American workers a half-century ago had jobs that paid enough to support families and buy homes. Millions of Americans workers today, by contrast, find themselves trapped in a 21st-century “precariat.” They have no security. And the myths that justify grand fortunes help lock this precariat in place.

So let’s start piercing those myths at every opportunity. Yes, Austin Russell certainly has smarts and works hard. But plenty of top execs a half-century ago also had exceptional smarts and worked hard and never made it anywhere close to the billionaire status Russell has now registered.

Smarts and hard work haven’t made Russell a billionaire. He owes his 10-digit status to a variety of factors that have nothing to do with talent or work ethic.

Consider Luminar’s lofty share price, the vehicle driving Russell’s new-found fortune. That share price reflects a stock market awash with rich investors eager to speculate on unproven firms like Russell’s that just might hit the jackpot. Those rich investors, in turn, owe their stashes of cash to decades of public policies that have crushed trade unions and prevented workers from sharing fairly in the wealth they create.

Founders of start-ups typically don’t take big paychecks as compensation. They take stock in their company instead. Over time, the stock appreciates in value. The founders pay no tax on that increase. Eventually, they start selling their shares, reaping huge windfalls. They do have to pay taxes on these profits, but at just the discounted “capital gains” tax rate.

“The tax treatment of founders’ stock,” notes Fleischer, “represents a critical design flaw in a progressive income tax system” that “contributes to the broader trend of increasing inequality, particularly at the very top of the scale.”

Those at the top and their cheerleaders have a justification, of course, for their preferential tax treatment. Our entrepreneurial geniuses, the argument goes, need an incentive to take the risks that create jobs and make our economy grow. But researchers, Fleischer points out, have found next to no evidence that tax breaks for entrepreneurs do anything more than reward these entrepreneurs for what they would be doing anyway.

Many Americans, observes Fleischer, take risks and get no tax breaks for their risk-taking.

“It is not self-evident,” he writes, “why risk taking by rich executives and venture capitalists is more valuable than risk taking by, say, a Korean-American grocer, a Mexican-American restaurateur, a farmer in California, or an Uber driver in Miami.”

Joe Biden campaigned on a call for a tax code that ends the “founders’ tax” loophole. His advisers have detailed changes that would both tax the capital gains of America’s rich at ordinary income tax rates—in effect almost doubling, the Tax Foundation reports, the federal levy on capital gains income—and tax the unrealized capital gains the rich bequeath to their heirs.

The Congress that takes office in January will be unlikely to enact such changes, given the party split in the Senate. Fundamental changes in the federal tax code will have to await the results of the 2022 midterm elections. But what we can do right now: change the conversation—and blow away the bogus rationales that let billion-dollar fortunes proliferate at our economy’s ridiculously lofty summit.

Sam Pizzigati co-edits Inequality.org. His recent books include: “The Case for a Maximum Wage” (2018) and “The Rich Don’t Always Win: The Forgotten Triumph over Plutocracy that Created the American Middle Class, 1900-1970” (2012).