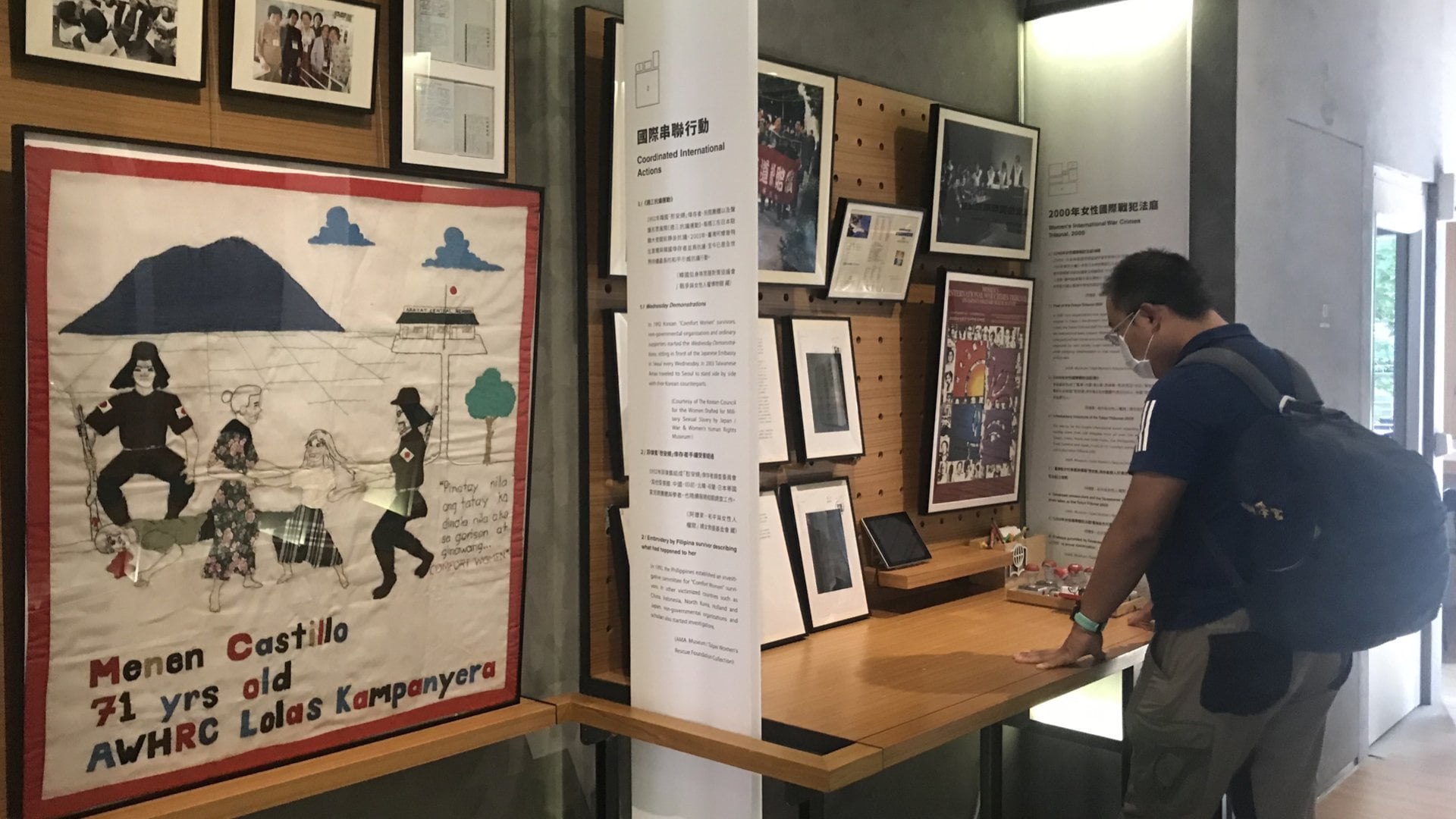 SNA (Taipei) — The only museum about Taiwanese Comfort Women closed down this month after its four years of operating at a loss. The women’s rights foundation that runs the Ama Museum said that they would try again in a cheaper location beginning in April next year.

The museum in Taipei’s historical area of Dadaocheng presented the story of the more than two thousand Taiwanese women who were forced into sexual slavery by the Japanese military before and during the Pacific War.

They are among up to an estimated 200,000 women and girls who were sent to front-line Japanese brothels in their own countries or elsewhere in Asia starting from 1932 until the end of the war. The brothels were euphemistically referred to as “comfort stations” and the people who worked in them as “Comfort Women.”

The women and girls suffered rape, beatings and torture. Some were killed and others committed suicide. Those who survived have told of having to cope with physical and mental illnesses, shame and stigma, and poverty.

The Japanese government has in recent years questioned whether the women and girls were coerced into working in the brothels.

In Taiwan, there isn’t the same level of public anger toward Japan over this issue as in South Korea and China, where anti-Japanese sentiment stemming from the wartime history still runs strong. Comfort Women or “Ama”–a term that translates as “grandmother” in the Taiwanese Hokkien language–are not talked about as much, and their history is less well known.

In Taiwan, where attitudes are much friendlier to its former colonizer, it is a politically sensitive issue. The two main parties, President Tsai Ing-wen’s Democratic Progressive Party (DPP) and the opposition Nationalist Party (KMT) have different attitudes toward the Comfort Women issue, said Hwang Shu-ling, a feminist scholar.

“Tsai Ing-wen and the DPP support this issue in terms of human rights, because that is what they like to emphasize, but they like to maintain a good relationship with the Japanese government.”

The previous government of Ma Ying-jeou of the KMT unsuccessfully demanded an apology and compensation from Japan for Taiwanese Comfort Women. Hwang said Ma “really had compassion and empathy for the Ama,” and visited them on several occasions. “But he saw this issue also as a political issue; he’s not afraid of offending the Japanese government because he’s more pro-China.”

But the Ama Museum and campaigners didn’t want to “talk about nationalism–it’s a women’s rights issue, a gender equality issue,” said Hwang, a professor in sociology and gender studies at the National Defense Medical Center in Taipei.

Despite efforts to promote the teaching of the Comfort Women history by groups such as the Taipei Women’s Rescue Foundation, which runs the museum, ordinary Taiwanese say they don’t know much about it.

Liao Yi-mu, 23, who studies fine arts, said that at school his teachers “mentioned it, but didn’t talk about it very clearly… The textbook mentioned that there were some people who were taken only, and some were women, but they didn’t say why they were taken, they only said there was this thing that happened,” he said.

The Ama Museum opened in December 2016 after more than ten years of planning and searching for a venue. It documents the battle of 59 Taiwanese Comfort Women who came forward publicly to tell their stories beginning in the 1990s and–along with survivors from other nations–to demand compensation and an apology from the Japanese state. Reportedly, only two of the 59 Taiwanese women who publicly identified themselves as former Comfort Women are still alive.

The introduction to one photo, of a protest in Taipei in 2008, said that Lin Shen-chung didn’t let joint pain from standing too long stop her from demonstrating. “Even if the government of Japan persists like a heartless telephone pole and stubbornly refuses to listen, I am not giving up,” the exhibit quoted Lin as saying.

The museum also displayed art work that was the result of therapy workshops run over sixteen years to help the survivors heal from their trauma.

The Taipei Women’s Rescue Foundation said earlier this year that the pandemic had exacerbated the museum’s financial losses. Attendance last year was 9,065, and from January to October this year was 8,141, according to the foundation’s emailed answers to questions, probably due to increased publicity after the museum’s closure was initially announced in July. The foundation declined to be interviewed, saying that its staff were too busy.

Next year’s reopened museum would be smaller-scale and have regularly rotating exhibitions to give a “feeling of freshness,” it said in the email.

Furthermore, the museum will hold outside exhibitions in universities and the community, “so that more students and the public can understand the history and stories of the ‘comfort women,’ and gender human rights issues,” the foundation added.

The Taipei Women’s Rescue Foundation has been running a crowdfunding campaign on a Taiwanese crowdfunding platform, zeczec.com, to meet relocation, refurbishment, and rental costs for the new venue. The financial target and time frame have changed several times. The project has reached 92% of its current goal of NTD1.5 million (US$52,600) with seven days to go.

“If the fundraising platform fails to meet the target, we will seek other ways to raise financial resources,” the foundation said. “We have already found a new site and are currently making follow-up plans.”