Published on
Friday, November 27, 2020
by
Inequality.org

The nation’s woefully inadequate response to the pandemic is jeopardizing millions of retirement futures. 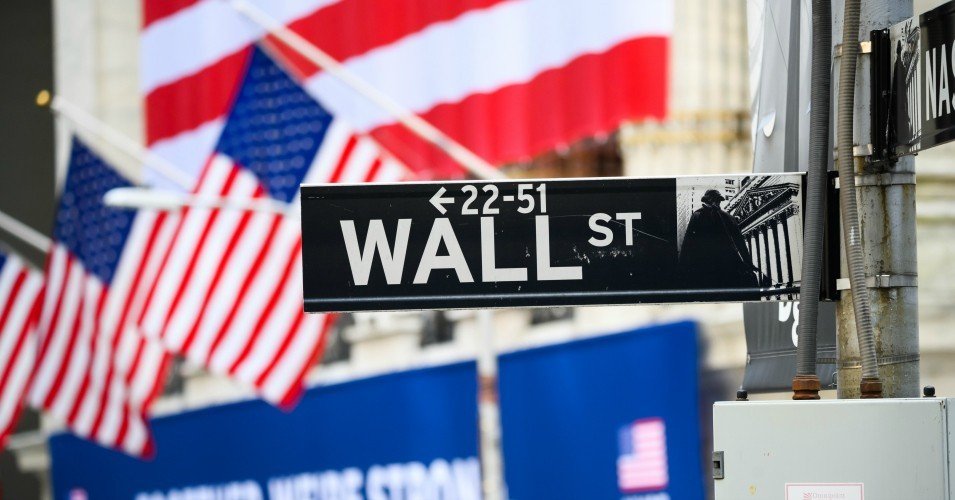 A view of the Wall Street street sign with the New York Stock Exchange during the coronavirus pandemic on May 25, 2020 in New York City. (Photo: Noam Galai/Getty Images)

The all-time record highs that Wall Street has registered this week have given some Americans — the nation’s already rich — considerable cause for celebration.

And the rest of the nation? Tens of millions of Americans are paying precious little attention to the chirpy tale of Wall Street’s ticker. The simple reason: They own no stocks at all. Millions of other Americans who do own stocks don’t see any reason to celebrate either. They’re finding themselves forced, amid pandemic economic collapse, to start selling the stocks that make up the bulk of their retirement savings.

How best to start understanding this story? The best place to begin: The latest numbers on stock ownership from the Federal Reserve. Fed researchers have been tracking who exactly owns the stocks that trade every business day on Wall Street ever since 1989.

Back nearly 30 years ago, in 1992, the share of stock nationally that belongs to America’s poorest half of households hit an all-time high. That “high” amounted to all of a miniscule 1.6 percent.

How much of America’s stock wealth does the bottom 50 percent hold these days? At the end of this past June, the most recent Federal Reserve data point available, the nation’s poorest half held less than 1 percent of the nation’s stock holdings, just 0.6 percent.

Numbers like these help explain why massive numbers of Americans didn’t rush out onto the streets to cheer earlier this week when two top Wall Street benchmarks, the Dow Jones industrial average and the S&P 500, hit their own all-time record summits. Shares of stock — either held directly or through mutual funds — make up just 2.3 percent of the total assets of households in the bottom 50 percent and a mere 7.6 percent of the assets the rest of the bottom 90 percent hold.

America’s richest 1 percent, on the other hand, have plenty of reason to celebrate Wall Street records. Stock holdings make up over 40 percent of top 1 percent household wealth. These 1 percenters, overall, hold 52.4 percent of the nation’s stock, a share almost five times greater than all the stock that households in the bottom 90 percent hold.

What does that mean in actual dollar terms for average American households? Fed research conducted last year found that 55.8 percent of households in the middle 20 percent of U.S. income-earners hold stocks. The median — most typical — value of these stocks for those average Americans who held them: just $15,000, down $1,000 from three years earlier.

And that value is shrinking this year as increasing numbers of Americans start taking advantage of changes Congress made this past spring — via the Covid-19 relief legislation — that let economically reeling Americans under age 59 1/2 withdraw dollars out of their 401(k), IRA, and other retirement accounts without having to take the standard 10 percent early withdrawal penalty.

The Covid-19 calamity, notes Denver CPA Celeste Schimmenti, “has forced many Americans to exhaust their savings and emergency funds,” and that’s left them agonizing over whether they’ll need “to dip into retirement savings to cover current expenses.” But dipping into retirement accounts — selling the stocks in these funds — can have a devastating impact on future retirement security. Withdrawing $10,000 from a 401(k) today can cost a 35-year-old $100,000 by the time retirement comes around.

“The number of Americans cashing out the stock they hold in their retirement accounts is rising as the income support for average Americans provided through the CARES Act expires.”

The rules around 401(k)s and other retirement accounts have traditionally used penalty fees to discourage cashing out account holdings. In Covid-19 America, with withdrawal penalty fees now off the table for this calendar year, Americans have begun making those withdrawals anyway.

The nation’s largest 401(k) provider, Fidelity Investments, reports that 5.2 percent of its clients made withdrawals from the start of April through October. Vanguard, another major provider, says the Covid crisis had 4.5 percent of those eligible making withdrawals. T. Rowe Price computes a 7 percent 401(k) raiding rate.

Some analysts are claiming that numbers like these present no real cause for concern. Americans “undeterred by the Covid-19 economic downturn,” writes Ted Godbout for the national association of retirement plan advisors, have “overwhelmingly continued saving for retirement.”

But the trend lines are all going the wrong way. The number of Americans cashing out the stock they hold in their retirement accounts is rising as the income support for average Americans provided through the CARES Act expires. Through May, for instance, fewer than 2 percent of Vanguard 401(k) holders were withdrawing funds. By the end of the summer, that rate had more than doubled.

By the end of the year, the Employee Benefit Research Institute’s Lori Lucas estimates, 10 percent of Americans with 401(k)s could be raiding their retirement futures.

And those who need Covid economic relief the most — gig and other low-income workers who’ve lost jobs or hours to the pandemic — don’t have retirement accounts to withdraw from. Overall, the Economic Policy Institute reported last year, “nearly half of working-age families have nothing saved in retirement accounts.”

Sam Pizzigati co-edits Inequality.org. His recent books include: “The Case for a Maximum Wage” (2018) and “The Rich Don’t Always Win: The Forgotten Triumph over Plutocracy that Created the American Middle Class, 1900-1970” (2012).