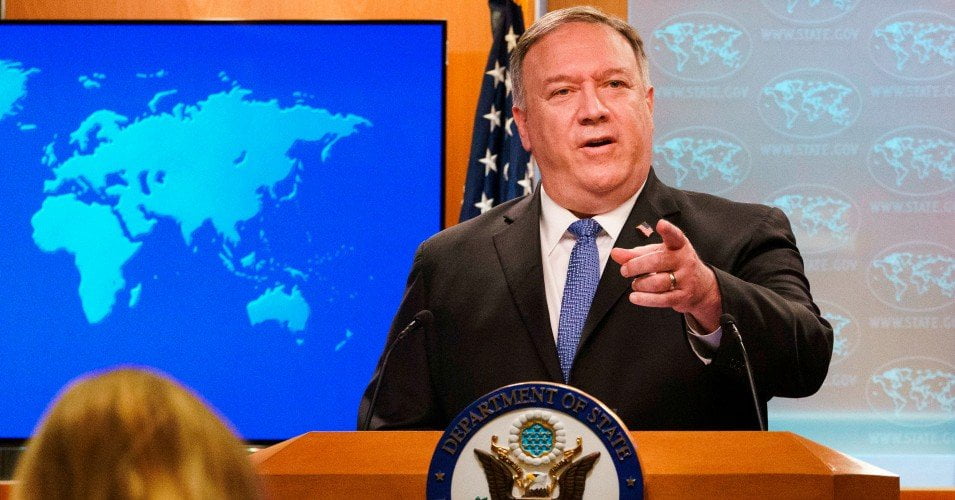 Secretary of State Mike Pompeo during a briefing on November 10, 2020 at the State Department in Washington, D.C. (Photo: Jacquelyn Martin/Pool/AFP via Getty Images)

Anti-war campaigners are warning that U.S. President Donald Trump is on the verge of launching a full-blown military conflict with Iran after the lame-duck incumbent on Wednesday blamed the Middle East nation for a rocket attack on the American Embassy in Baghdad over the weekend, an accusation Tehran rejected as “fabricated.”

“Our embassy in Baghdad got hit Sunday by several rockets. Three rockets failed to launch,” Trump tweeted late Wednesday afternoon, attaching a photo purporting to show the three rockets. “Guess where they were from: IRAN. Now we hear chatter of additional attacks against Americans in Iraq.”

“Some friendly health advice to Iran: If one American is killed, I will hold Iran responsible,” the outgoing U.S. president added. “Think it over.”

“There are forces in Washington and across Middle East who’ve been pushing for a military conflict between the U.S. Iran which can easily escalate into a disaster for the entire region.”
—Negar Mortazavi, The Independent

Saeed Khatibzadeh, a spokesperson for Iran’s Foreign Ministry, denied that Iran was behind the rocket attack—which damaged the embassy compound and injured one Iraqi—and warned Trump against engaging in any “dangerous adventurism” during his remaining time in power.

“Such repetitive, baseless, and fabricated allegations in the form of conventional White House blame games are meant to cast a shadow on Trump’s difficult situation,” Khatibzadeh said Thursday, according to Iranian state media. “As we have repeatedly said, attacks on diplomatic and residential buildings are rejected, and in this particular case, the finger of blame is being pointed at the United States itself and its partners and allies in the region, who are seeking to increase tensions.”

Iran’s top diplomat, Javad Zarif, tweeted in response to Trump that “putting your own citizens at risk abroad won’t divert attention from catastrophic failures at home,” referring to the U.S. president’s disastrous handling of the coronavirus pandemic.

Foreign policy analysts have been cautioning for weeks that the Trump administration could attack Iran on its way out the door in a last-ditch effort to undermine any attempts by the incoming Biden administration to restore diplomatic relations and return to the U.S. to the nuclear deal, which Trump violated in 2018. Just last month, according to the New York Times, Trump asked his advisers for options to bomb Iran’s primary nuclear energy site.

“Also remember as he’s threatening Iran (again) in a conflict of his own creation, an American dies every 25 seconds from Covid,” Rad wrote.

What happens in next 28 days is on US & Israel. Everyone knows #Iran isn’t the aggressor & should act as such. pic.twitter.com/U712a4exez

The Wall Street Journal reported Wednesday that “no Americans were hurt in the [rocket] attack, which damaged two buildings and a gym which troops and embassy personnel use for exercise.”

“All 21 rockets hit inside the heavily fortified Green Zone—where the embassy and a base hosting troops from the U.S.-led coalition are located—with about half of those rockets landing inside the American embassy compound,” the Journal reported, citing an unnamed official.

In a statement following the attack, the U.S. Central Command blamed the attack on an “Iranian-backed Rogue Militia Group” without providing any specific evidence.

On Wednesday, according to the Journal, U.S. Secretary of State Mike Pompeo—a longtime Iran hawk and opponent of the nuclear deal—met with Acting Defense Secretary Christopher Miller and national security adviser Robert O’Brien to “discuss options to dissuade Iran and the Shiite militias it supports from attacking U.S. personnel in Iraq.”

Earlier this month, as Common Dreams reported, the U.S. flew two B-52 bombers over the Persian Gulf in a saber-rattling maneuver aimed at threatening Iran, which has been in the Trump administration’s crosshairs for years. Further heightening fears of war, Israel has reportedly deployed a submarine to the Persian Gulf in what the Washington Post described as “possible preparation for any Iranian retaliation over the November assassination of a senior Iranian nuclear scientist,” a killing widely believed to have been carried out by Israel.

“There are forces in Washington and across Middle East who’ve been pushing for a military conflict between the U.S. Iran which can easily escalate into a disaster for the entire region,” tweeted Negar Mortazavi, a columnist for The Independent. “Beware of the impeached, one-term president who couldn’t get a better deal with Iran he promised.”

Stephen Miles, executive director of Win Without War, noted that Trump “inherited a working diplomatic nuclear deal and thawing relations, blew that all up to try out ‘maximum pressure’ which predictably failed, and now here we are yet again.”

“Friendly reminder before Trump does whatever crazy thing he’s about to do to Iran,” said Miles, “this is all his fault.”