The move comes two weeks after the U.S. became the first country to recognize Morocco’s claim of sovereignty in the illegally occupied territory. 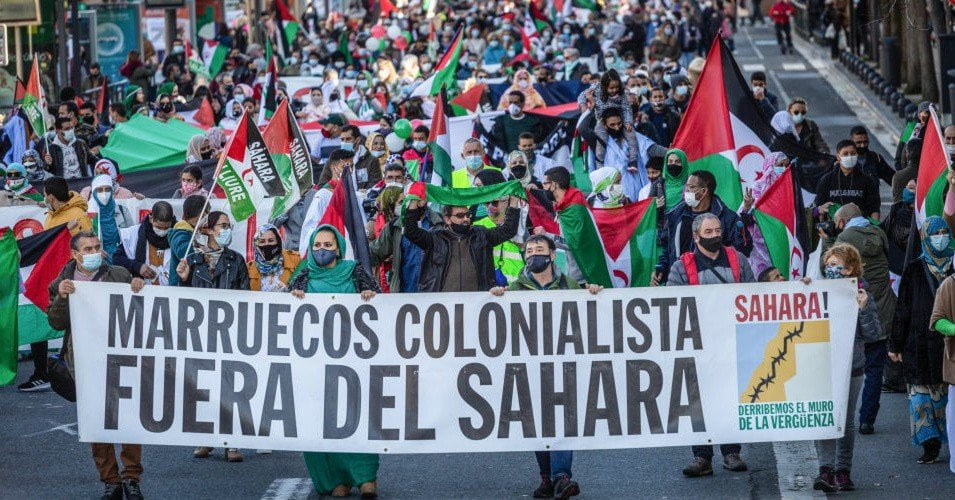 Protesters march as they display a banner reading “Colonialist Morocco out of the Sahara” during the demonstration in San Sebastian, Spain on December 20, 2020. (Photo: Javi Julio/SOPA Images/Light Rocket via Getty Images)

Sahrawi independence advocates defiantly dismissed an announcement Thursday by Secretary of State Mike Pompeo that the United States would open a “virtual” diplomatic mission in Western Sahara as a first step toward establishing a permanent consulate in the Moroccan-occupied territory.

“We the Saharawis are fighting [for] our complete sovereignty over our Western Sahara; we don’t need your permission to do that.”
—Minetu Larabas Sueidat,
National Union of Sahrawi Women

Pompeo said in a statement that the U.S. was “inaugurating a virtual presence post for Western Sahara, with a focus on promoting economic and social development, to be followed soon by a fully functioning consulate.”

The State Department said that the virtual post—which will allow U.S. officials to conduct consular and other business remotely—will be managed by the American Embassy in Rabat, the Moroccan capital.

The development came nearly two weeks after President Donald Trump announced an agreement in which the U.S. recognized as legitimate Morocco’s illegal occupation in exchange for the North African kingdom’s establishing full diplomatic ties with Israel. This made the U.S. the first country to recognize Morocco’s claim of sovereignty in Western Sahara.

The Polisario Front—the United Nations-recognized, Algerian-backed Sahrawi national liberation movement—blasted the U.S. declaration as “a blatant violation of the United Nations charter and the resolutions of international legitimacy.”

Additionally, Article 49 of the Fourth Geneva Convention (pdf) states that an “occupying power shall not deport or transfer parts of its own civilian population into the territory it occupies,” a proscription violated by both Israel in the occupied Palestinian and Syrian territories and by Morocco in Western Sahara.

When you go low we go up. Your empty slogans on human rights can never impact our future. We the Saharawis are fighting 4 our complete sovereignty over our #WesternSahara, we don’t need your permission to do that

Here’s to hoping that Biden walks back this ill-considered disregard for international legality, and affirms US support for the human rights of all people in both #WesternSahara and #Morocco . https://t.co/i0cYFBF7Un

Western Sahara belongs to Morocco like Palestinian land belongs to Israel — IT DOESN’T!!!
Join CODEPINK in rejecting occupation and colonialism from the U.S. to Palestine to Western Sahara. Add your name now! https://t.co/NgRkcCb59U

Known as “Africa’s last colony,” Western Sahara was invaded by Moroccan and Mauritanian troops in 1975 as Spanish colonial troops withdrew from their former territory. In order to solidify Moroccan control over the phosphate- and fishery-rich land, former king Hassan II ordered a “Green March” of hundreds of thousands of Moroccan civilians into Western Sahara to colonize the vast desert territory.

The Polisario Front has resisted the occupation for 45 years and today controls up to a quarter of Western Sahara as the Sahrawi Arab Democratic Republic (SADR), which scores of United Nations member states have recognized since it was proclaimed in 1976. However, more than half of these countries have since either withdrawn or suspended their recognition.

Moroccan settlers today comprise over two-thirds of the territory’s population of approximately 600,000.

A fragile U.N.-backed 1991 ceasefire between Morocco and the Polisario rebels lasted until last month, when SADR President Brahim Ghali declared it over after he said that Moroccan troops opened fire on peaceful protesters.

According to a 2015 Amnesty International report (pdf), as well as documentation by local and international human rights groups, arbitrary arrest and imprisonment, forced disappearances, and torture are some of the tactics employed by the occupation forces to control the territory and its people.

Polisario forces are also accused of serious human rights violations, and some Sawrahis oppose their rule.