Published on
Friday, December 25, 2020
by
The Progressive

A People’s Agenda for a Better Nation

The Poor People’s Campaign and Congressional Progressive Caucus team up to chart a course for the future. 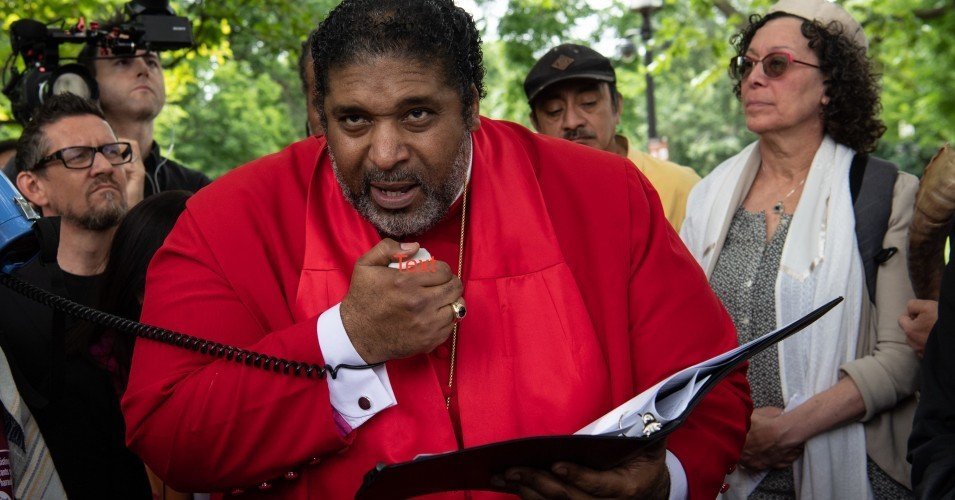 “Everything you hear tonight resonates with the call of our deepest moral values to establish justice and promote the general welfare, and our deepest religious values to love our neighbors and to lift from the bottom. And everything here, we are willing to fight and push for, because it is not about compromise. It is about deciding the future of this nation will be compromised if we don’t do at least the things that are here in this people’s agenda.”

“Poverty, unemployment, racial injustice, homelessness—these are all policy choices, driven by structures that both Democrats and Republicans have refused to tackle.”
—Rep. Pramila Jayapal

With those words on December 21, the Reverend William Barber II, the nation’s most prominent progressive preacher, lent his moral authority to a sweeping agenda for governance as the Congressional Progressive Caucus unveiled its priorities for the first six months of the new year.

In a ninety-minute program livestreamed on Facebook, the caucus and the Poor People’s Campaign teamed up to deliver a message that mixed Social Gospel sermonizing and rally-the-faithful appeals to the prospect of shifting the focus in Washington, D.C., during the first six months of Joe Biden’s presidency.

The Progressive Caucus agenda is the product of more than three dozen participating activist groups, including the Poor People’s Campaign, said caucus chair U.S. Representative Pramila Jayapal, (Democrat of Washington). Jayapal called it an agenda “that puts people first, centering poor and working people of all races, who have been left out and left behind.”

This agenda, the speakers noted, was necessary even before the advent of COVID-19, but it has been made still more so by the social and economic fault lines that the pandemic has exposed.

The seven-point platform is both a fundamental and ambitious list, ranging from specific policies to broad, aspirational goals:

Throughout the program, Jayapal acted as a sort of emcee while a mix of activists and Progressive Caucus members took turns endorsing the agenda and bolstering the underlying demands.

“The Progressive Caucus policies for COVID-19 will make sure that we have money in our pockets to stay at home, clear student debt payments, address medical debt,” said Zillah Wesley of the Poor People’s Campaign in Washington, D.C. “They will protect our essential workers, our frontline workers who are low wage. They will make sure that we care for each other for now and for our future and expand our health care system, we need this.”

Eshawney Gaston, a North Carolina home health care worker and Fight for $15 activist, spoke of provisions relating to worker and union rights. “Pass the $15 minimum wage in the first 100 days,” she said. “Make it easier for home health care workers, fast food workers, and all workers to form a union, because we need a voice on the job. Pass legislation that will protect the health and safety of frontline workers. And these are the top priorities for working people like me.”

“This is the present that America and the world needs right now. For chains of inequality to be broken. And for all oppression to cease. And this agenda starts us on that journey.”
—Reverend William Barber II

On health care, Kansas farmer, retired nurse, and Poor People’s Campaign participant Mary Jane Shanklin spoke of her uninsured mother-in-law’s death in 2012, after a broken leg required her to get treatment at a hospital in Wichita, a two hour drive from her home.

“When she came out of that hospital, she had three new diagnoses: hypertension, diabetes, and leukemia, and she died three months later. This is what poverty looks like here—this is the lack of the ability to pay for insurance or medical bills,” said Shanklin, adding later that change is imperative “because the for-profit health care system we have now is inhumane, immoral, and it’s failing us.”

While reaching high, the agenda also suggests a spirit of working step-by-step toward more ambitious long-term goals. On health care, for example, the caucus doesn’t shy from backing Medicare for All—but it also doesn’t treat that as an all-or-nothing objective. Instead, the health care plank, said Shanklin, vows “to ensure health care for everyone by taking important steps to expand health care and make equitable investments into public health infrastructures, as we work toward Medicare for All.”

Disability rights and health care activist Ady Barkan bluntly acknowledged political limitations, while seeking to inspire those listening with a vision of how partial measures could advance the ultimate goal.

“Of course, we wish we had the power to pass Medicare for all this year,” Barkan said. “But we know that we are not there yet.”

For that reason, he continued, the agenda emphasizes “big strides forward to getting more people to the health care they need and making structural changes that will help us reduce the power of the for-profit health care industry.”

The agenda is “ambitious, it’s bold, and it’s achievable,” said Barkan, who listed some of its goals: expanding Medicare by lowering the eligibility age to fifty and covering all children up to age twenty-five; allowing government health insurance programs to negotiate with drug companies directly over pricing; expanding public health funding—especially for providers that serve urban and rural communities as well as Indian health providers; and protecting access for health care—including reproductive health care for women, trans people, and others.

“By combining the energy of our movement activists with the savvy and the growing power of our champions inside of Congress, we can actually enact some of these proposals into law in the coming year,” Barkan declared.

The Progressive Caucus message also sought to lay down a marker early, both with the broader Democratic leadership and with the Biden-Harris team. Progressives should rightfully take credit for helping rid the White House of Donald Trump and maintaining Democratic control of the House of Representatives, Jayapal said.

“Poverty, unemployment, racial injustice, homelessness—these are all policy choices, driven by structures that both Democrats and Republicans have refused to tackle,” Jayapal said.

She explained Trump’s victory in 2016 was “because people in both parties lost faith in the government to stand up for regular folks, instead of the biggest corporations and thousands of lobbyists that line our door every day in Congress, even before COVID-19 hit.”

“An agenda that centers people will always win,” Jayapal declared, citing the 2020 victories of incumbents in swing districts who ran on Medicare for All and a Green New Deal, and the passage of ballot measures—“even in states that voted for Donald Trump”—for a $15 minimum wage, decriminalizing marijuana, and instituting paid leave for workers.

“We have one shot to get it right in 2021,” she added. “Thanks to the demands of this inside-outside movement, President-elect Biden ran on the most progressive policy platform of any President in recent history. He and Vice President-elect Kamala Harris have a clear mandate to fight for us to respond to the root causes of suffering and to transform the structures of our country, so people can thrive, not just barely survive. Now it’s time to deliver.”

In enlisting Barber and the Reverend Liz Theoharis, the national co-chairs of the Poor People’s Campaign, the event was one of the most unabashed mingling of faith and politics on the political left in recent memory. And, whether intended or not, it served as a rebuttal to the increasingly misplaced critique that Democrats and progressives are out of touch with “people of faith.”

The event’s appeals to faith, however, were also inclusive of non-Christian perspectives. At one point, Barber broke into a segment in which Apache Activist Vanessa Nosie was describing the copper mining project that threatens the Oak Flat sacred land in Arizona where she lives.

Barber urged the Congress members in the Progressive Caucus to push for House Democrats to zero out a pending budget line that he said would cover the paperwork to complete the transaction on the site. Canceling the item “could stop them from stealing the Apaches’ holy land, which is as important to them as the Vatican in Rome and Jerusalem in Israel.”

Indeed, as he has done since his days organizing the Moral Mondays political action events in North Carolina, Barber evoked a movement that welcomes and includes the strictly secular as well as the explicitly religious.

“I pray God’s anointing of strength upon every member of the Progressive Caucus whether they’re Christian or Jewish or Muslim or not even people of faith,” Barber said toward the end of the event.

Still, appeals to faith traditions as liberation remained close to the surface. Early in the evening, Barber quoted from the most militant passage of the Christmas song, “O, Holy Night”: “Chains shall God break for the slave is our brother, and in God’s name all oppression shall cease.”

Barber elaborated: “This is the present that America and the world needs right now. For chains of inequality to be broken. And for all oppression to cease. And this agenda starts us on that journey.”

Erik Gunn is a Milwaukee-based writer.