“The Trump campaign should end its pathetic and futile attempts to subvert democracy and ignore the will of the people.” 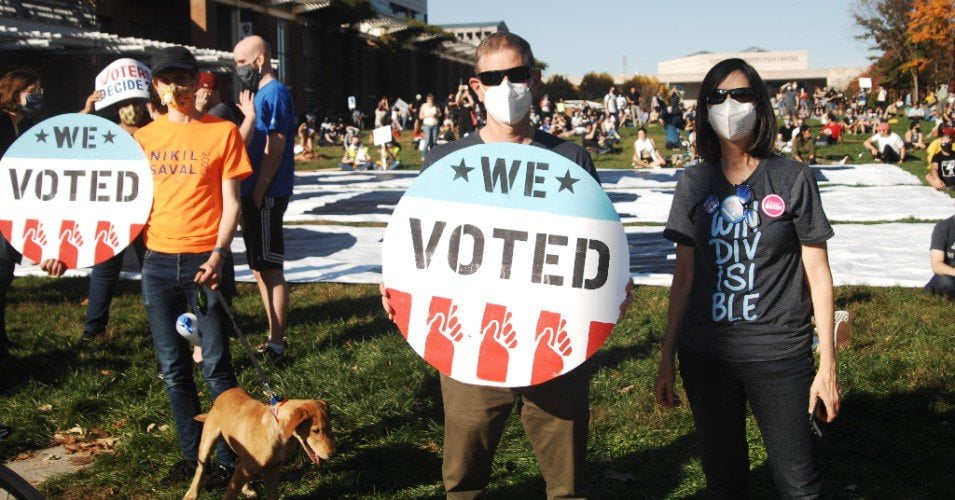 Voting rights advocates expressed excitement and relief on Friday after a federal appellate panel upheld a lower court’s ruling rejecting a request from President Donald Trump’s reelection campaign for an emergency injunction to overturn the certification of election results in Pennsylvania.

“While Trump’s lawsuit is legal farce, his intent to overthrow American democracy is dangerous fact.”
—Witold Walczak, ACLU of Pennsylvania

After Pennsylvania certified its results earlier this week—the state was among those that helped deliver President-elect Joe Biden’s historic and decisive victory—Trump continued to deny the outcome, saying that “this election has to be turned around, because we won Pennsylvania by a lot.”

“Free, fair elections are the lifeblood of our democracy,” added Bibas, a Trump appointee, in the 21-page opinion (pdf). “Charges of unfairness are serious. But calling an election unfair does not make it so. Charges require specific allegations and then proof. We have neither here.”

VICTORY (again!): A court just rejected the Trump campaign’s challenge to this ruling and stopped another outlandish attempt to disenfranchise millions of Pennsylvania voters in a blatant affront to our democracy. https://t.co/KmbUFSTfWH

“Once again, this court decision is a win for voters,” declared Suzanne Almeida, elections adviser for Common Cause Pennsylvania. “We’re glad that this court, also, recognized the lack of evidence and lack of merit in this lawsuit. In America, voters choose our elected officials. Pennsylvania’s voters made a collective decision, weeks ago, and that decision needs to be honored.”

Derrick Johnson similarly said that the NAACP is “pleased with the court’s decision to uphold democracy and allow the people’s will to prevail in the face of ridiculous suppression efforts. We must remain resolute and committed to protecting millions of Americans’ votes as the Trump campaign attempts to undermine our democracy.”

Johnson was far from alone in condemning the president’s recent attacks on democracy—from his seemingly endless lies about voter fraud to a series of failed legal challenges.

“We must remain resolute and committed to protecting millions of Americans’ votes as the Trump campaign attempts to undermine our democracy.”
—Derrick Johnson, NAACP

“While Trump’s lawsuit is legal farce, his intent to overthrow American democracy is dangerous fact,” said Witold Walczak, legal director of the ACLU of Pennsylvania. “The voters have spoken in record numbers, and it is time to end this painful chapter in American history.”

Mimi McKenzie, legal director at the Public Interest Law Center, concurred that “the Trump campaign’s attempts to subvert democracy have been deeply concerning. But it is reassuring that yet again a court has outright rejected their efforts to disenfranchise Pennsylvania voters.”

Sophia Lin Lakin, deputy director of the ACLU’s Voting Rights Project, also agreed. As she put it: “The Trump campaign should end its pathetic and futile attempts to subvert democracy and ignore the will of the people. The voters have spoken.”

It bears repeating: “The Campaign never alleges that any ballot was fraudulent or cast by an illegal voter.”

In court for weeks, they have been trying to invalidate the ballots of millions of Pennsylvanians, who they don’t even *claim* have done anything wrong. https://t.co/wcv0O3yYRN

Despite the loss on Friday and calls for an end to the lawsuits, Trump campaign attorneys Jenna Ellis and Rudy Giuliani responded to the panel’s ruling by promising to plow ahead to the U.S. Supreme Court—to which the president has appointed three justices.

“The activist judicial machinery in Pennsylvania continues to cover up the allegations of massive fraud,” said Trump’s attorneys. “We are very thankful to have had the opportunity to present proof and the facts to the PA state legislature. On to SCOTUS!”

Trump, for his part, continued to tweet baseless claims of “massive voter fraud.” The ruling came a day after the president berated a journalist as a “lightweight” for asking if he would concede if the Electoral College votes in favor of Biden.

“Don’t talk to me that way,” Trump said in response to the questioning from Reuters White House correspondent Jeff Mason. “I’m the president of the United States. Don’t ever talk to the president that way.”

Despite Trump’s tantrums and lies since his defeat, some advocates are optimistic.

Tim Stevens of the Black Political Empowerment Project said that “as the founder of an organization that advocates that African Americans vote in each and every election and that our votes count, I am elated that our system of democracy worked in the midst of the most serious threat to that democracy that I have witnessed in my lifetime. Hopefully, the healing can now begin, and our commonwealth and our citizens will never again witness such an assault on who we are as a nation.”

As Terrie Griffin of the League of Women Voters of Pennsylvania said: “Today’s decision affirms one thing: every vote matters.”

Kristen Clarke, president and executive director of Lawyers’ Committee For Civil Rights Under Law, wondered on Friday: “How many losses are President Trump and his allies willing to endure in their futile and baseless attempts to use the courts as a forum to rewrite the election outcome?”

“Once again,” Clarke added, “the court has made clear that there is no legal basis to subvert the will of voters.”