Scores of environmental and progressive groups warn that Moniz, “an unrepentant founding father of the fracking industry,” would “extend our reliance on fossil fuels and the very companies with which he is linked.” 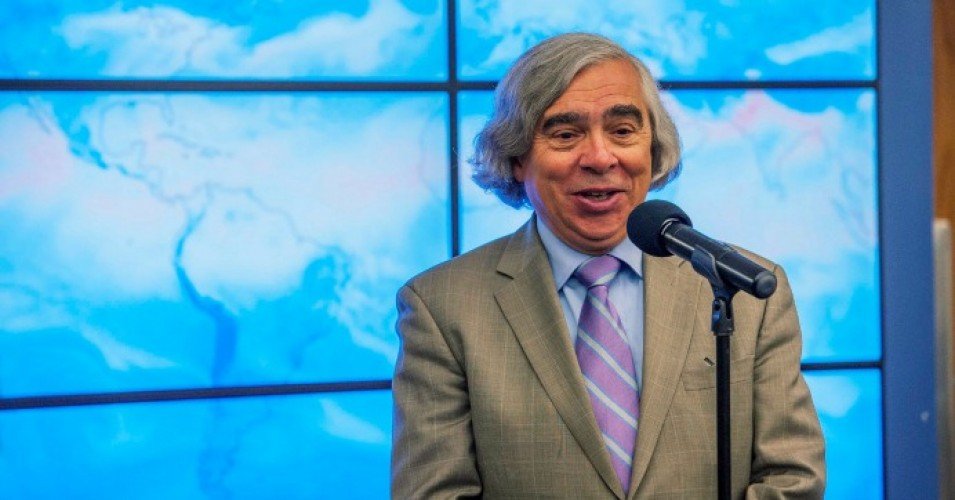 A coalition of more than 70 environmental and progressive groups on Monday urged President-elect Joe Biden to give former Obama administration Energy Secretary Ernest Moniz a pass for a post in either his  transition team or his Cabinet.

In an open letter (pdf), the groups praise Biden for his “ambitious climate platform,” a $2 trillion blueprint for a more sustainable future that earned him the endorsement of climate champions including the Sunrise Movement and Greta Thunberg.

“The American people have given Joe Biden a mandate to take bold action in service of climate justice, public health, economic prosperity, and racial equity. Moniz would only be holding him back.”
—Lisa Ramsden, Greenpeace USA

Furthermore, the signers said they were “deeply encouraged by the statement in the Biden-Harris Transiton Team Ethics Plan that you aim ‘to ensure that those who serve are aligned with his values and policy priorties, and have not, for example, been leaders at fossil fuel or private prison companies.'”

In an unspoken implication of the hypocrisy inherent in naming a fossil fuel company executive to his administration, the letter then states in bold type: “Therefore, we… urge you to commit to ensuring Ernest Moniz holds no public or private role, whether formal or informal, in your transition team, Cabinet, or administration.”

Mr. Moniz’s professional and financial ties fly in the face of the Biden Plan to Guarantee Government Works for the People that would “reduce the corrupting influence of money in politcs… restore ethics in government… [and] rein in executive branch financial conflicts of interest.”

Mr. Moniz’s employment and financial ties situate him firmly in the revolving door between government and fossil fuel corporations. For example, a profile in the New Republic details the close relationship between Mr. Moniz and the fossil gas and electric utility holding company Southern Company.

Southern Company received “$407 million in financing from the Department of Energy during Moniz’s tenure for a ‘clean coal’ plant that was never completed. After championing the doomed project and leaving office, Moniz joined the company’s board in March 2018. According to Southern’s proxy statements, he accepted a combined $486,668 worth of fees and stock awards from Southern in 2018 and 2019.”

The letter then notes the imcompatibility of Biden’s acknowledgement that “climate change is an existential threat” with Moniz’s fossil fuel-friendly policies and actions.

“Mr. Moniz’s championing of an ‘all-of-the-above’ energy policy goes against your commitments to tackle the climate emergency,” it states. “He has been a cheerleader for ‘clean’ coal, the export of liquified natural gas, and the untenable expansion of fossil gas.”

“Indeed, Mr. Moniz is an unrepentant founding father of the fracking industry,” the letter states. “He spearheaded an influential 2010 report that helped establish the dangerous myth that fossil gas is a ‘bridge fuel,’ and he continues to promote expensive and unproven technologies that will extend our reliance on fossil fuels and the very companies with which he is linked.”

“We have no doubt that the world needs a leader on climate action and integrity in the White House in January,” the signers conclude. “We are also certain that Mr. Moniz must not have any role in guiding you there or in a Biden administration.”

Should Biden’s next Secretary of Energy be in the pocket of big oil and gas? We don’t think so.

Join us in telling @JoeBiden to say NO to Ernest Moniz and YES to climate champions for his administration! https://t.co/S048q5Aa7d

Lisa Ramsden, senior climate campaigner at Greenpeace, USA, stressed in a statement that “Ernest Moniz is the wrong climate voice for the moment. His numerous and long-standing ties to oil and gas companies raise a red flag for climate voters who mobilized to elect leaders who will put working people before corporate executives.”

“The American people have given Joe Biden a mandate to take bold action in service of climate justice, public health, economic prosperity, and racial equity,” added Ramsden. “Moniz would only be holding him back. Instead, Biden must seek out climate champions who understand the crisis we’re in and have the experience to deliver solutions that help all people thrive.”

While President Donald Trump gets much the blame on the political left—and much the credit on the right—for the United States becoming the world’s top oil and natural gas producer, the U.S. actually achieved fossil fuel supremacy during the Obama administration—a most inconvenient and often ignored truth on both sides of the political aisle.

The U.S. became the world’s top natural gas producer in 2013, under Obama.

The U.S. now leads the world in oil production, too…largely because of a boom in production from shale oil, which also began under Obama. pic.twitter.com/K5SlIohXPd

Republicans were usually loth to admit that the nation’s biggest oil and natural gas boom occurred under President Barack Obama, who they incessantly painted as inimical to not only fossil fuels but capitalism and the “American way of life.” During the 2020 presidential campaign, Democrats appeared all too happy to ignore Obama’s record while attempting to assure progressive voters that the eventual nominee, Joe Biden, was serious about combating climate change. Progressive critics, most notably supporters of Sen. Bernie Sanders (I-Vt.) during his 2020 presidential run, accused Biden of gaslighting—both figuratively and literally.

Progressives are also alarmed that Moniz is not the only troubling name to appear on Biden’s list of transition team and potential Cabinet members. There’s Susan Rice, Obama’s militaristic former U.N. secretary; Cecilia Muñoz, a top Obama immigration adviser who defended the family separation policy that gained international notoriety during Trump’s tenure; and corporate CEO —and Republican—Meg Whitman, to name but a few.

Earlier this week, a progressive coalition of over 50 organizations sent two letters to Biden urging him not to appoint corporatists to his Cabinet.

“If your administration cares to remedy longstanding ills—like corporate concentration and structural economic inequities, systemic racism, the climate crisis, endless wars, and more—it must be run by people who care foremost about working in service of the general welfare,” the groups wrote. “The revolving door limits the trust Americans have in government and has time and again led to bad policy outcomes.”

“We urge you to take advantage of this historic and unique moment in American history to shut the revolving door closed and rebuild that trust,” they said. “The nation is depending on you to ensure the executive branch is led by the right people for this critical moment.”

Recognize What This Is: A Final Attempt of a Desperate, Bitter Man to Cling to Power
More in:
Climate, U.S.
,
Joe Biden, Barack Obama, Fossil Fuels, Fracking, Corporate Power, US Department of Energy, Greenpeace