As Trump Spouts Last-Minute Lies, Top Pennsylvania Officials Make Clear: 'Election Will Not End' Until All Ballots Are Counted

“Donald Trump can tweet, and he can pout, and he can make whatever statements he wants to make. But this election will not be over here in Pennsylvania until we can deduce the will of the people.” 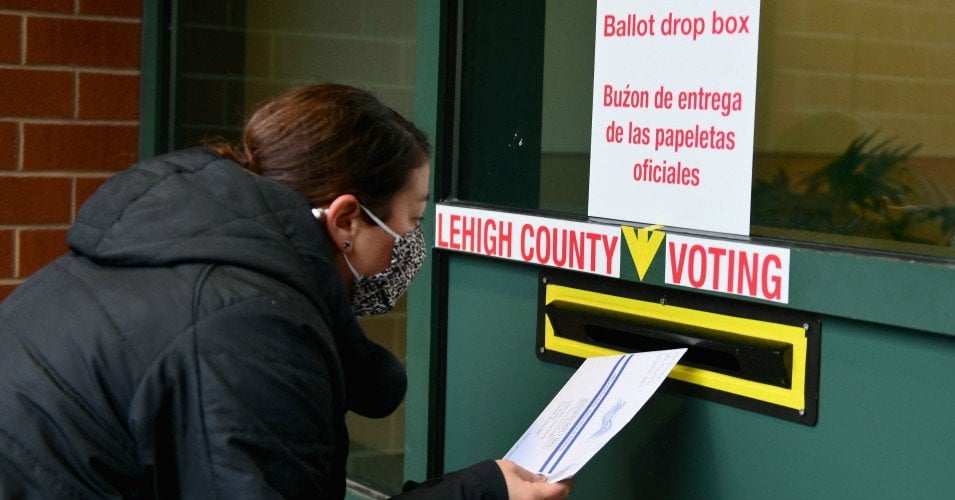 A voter arrives to drop off he ballot during early voting in Allentown, Pennsylvania on October 29, 2020. (Photo: Angela Weiss/AFP via Getty Images)

Pushing back against President Donald Trump’s baseless claim on the eve of Election Day that Pennsylvania’s vote-tallying process is vulnerable to “unchecked cheating,” top officials in the crucial battleground state made clear in media appearances late Monday that neither the president’s incendiary rhetoric nor his campaign’s legal interventions will deter the counting of all lawfully cast ballots.

“This election will not end until all of the legal, eligible votes are counted,” Pennsylvania Attorney General Josh Shapiro, a Democrat, said on MSNBC Monday night.

“That will take a few days, and Donald Trump can tweet, and he can pout, and he can make whatever statements he wants to make,” Shapiro continued. “But this election will not be over here in Pennsylvania, a winner will not be declared, until we can deduce the will of the people. And that will happen after all of those ballots are counted.”

“This election will not end until all of the legal, eligible votes are counted.” -Pennsylvania Attorney General Josh Shapiro pic.twitter.com/nAda2EXrZ1

Because of its status as a potentially decisive swing state, Pennsylvania has been at the center of tense election disputes in recent weeks as Republican operatives and the Trump campaign have carried out what one voting rights attorney described as the “most blatant, open attempt at mass disenfranchisement” that he has “ever witnessed.”

Late last month, as Common Dreams reported, a deadlocked U.S. Supreme Court rejected Pennsylvania Republicans’ effort to roll back a three-day extension of the state’s absentee ballot deadline. The extension, approved by the Pennsylvania Supreme Court in September, allows the counting of ballots that arrive by 5:00 pm on November 6 as long as they are postmarked by Election Day.

While the U.S. Supreme Court’s decision to let the state court’s ruling stand was applauded as a victory for voting rights, analysts warned the legal battle may not be over; newly confirmed Justice Amy Coney Barrett was not yet on the bench for the decision, and the right-wing judge could tip the balance toward the GOP in a future case.

In the final stretch of the campaign, Trump has repeatedly zeroed in on the high court’s ruling in Pennsylvania as part of his flailing effort to delegitimize ballots counted after Election Day—a normal and legal practice the president has attempted to cast as unprecedented and fraudulent.

“We’re going to go in the night of, as soon as that election is over, we’re going in with our lawyers,” Trump told reporters Sunday, threatening to try to stop the counting of absentee ballots.

During a rally in Scranton on Monday, Trump—who has openly said that he’s “counting on the federal court system” to declare an election winner before all legally submitted ballots are counted—vaguely warned that “when the Supreme Court gave [Pennsylvania] an extension, they made a very dangerous situation. And I mean dangerous, physically dangerous.”

The president clarified in a tweet later Monday that he meant the high court’s decision would “induce violence in the streets”—a warning observers characterized as open incitement at a time when fears of mass election-related chaos and violence by right-wing militias are running high.

Twitter appended a safety warning to Trump’s tweet shortly after it was sent out to his 87 million followers. 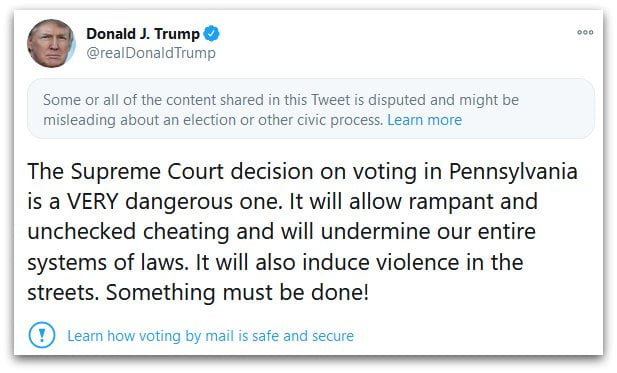 Kathy Boockvar, secretary of the Commonwealth of Pennsylvania, said in an interview on MSNBC Monday that the president’s tweet was “completely inappropriate” and added that she is working to ensure that “every qualified voter has the right and opportunity to vote.”

“We’ve been fighting disinformation for years, right, but this year it’s just incredibly rampant,” Boockvar said, referring to Trump’s lies about mail-in voting fraud. “Pennsylvania has such strong processes in place, it would be incredibly hard to do any kind of fraud or cheating. And the president knows that.”