Raytheon, one journalist pointed out, is “a key sup­pli­er of bombs to the U.S.-Saudi war in Yemen that has lob­bied aggressively in opposition to curbs on arms sales to the Sau­di-led coali­tion.” 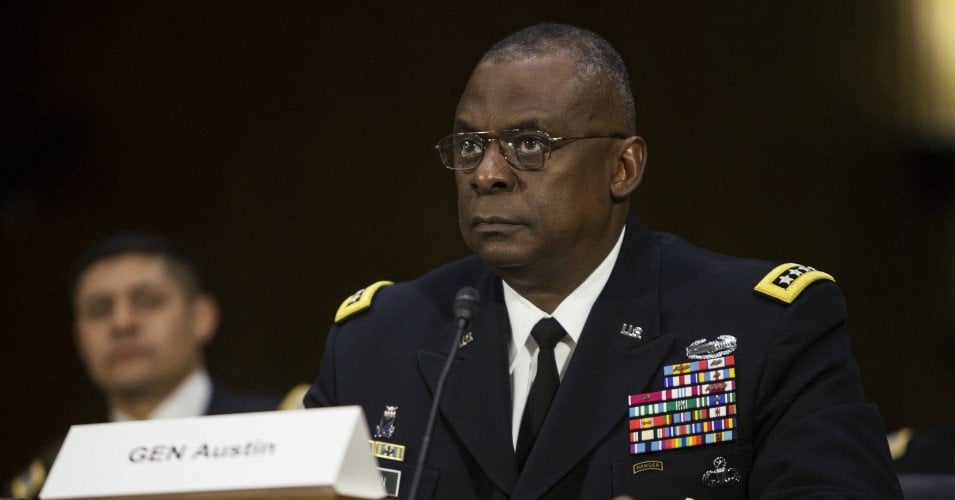 Biden’s rejection of Flournoy—a hawk and Booz Allen Hamilton board member—was viewed as a positive by some progressive groups, but the reported nomination of Austin was hardly welcomed with open arms.

“Tremendous gratitude to the over 2,500 individuals who took action and contacted the Senate to block Flournoy’s appointment,” CodePink, part of a coalition of anti-war organizations that mobilized against Flournoy, said late Monday. “Get ready, Gen. Austin, we’re coming for you.”

Danielle Brian, executive director of watchdog group Project on Government Oversight, tweeted that Biden’s selection of Austin—who served as head of the U.S. Central Command during the Obama administration—spells “bad news for civilian control [of the armed forces] and any real distance from the military-industrial complex.”

Others similarly raised alarm about the selection of another retired general, particularly one with close ties to the weapons industry, to lead the Department of Defense amid a growing push by the Democratic Party’s left flank to cut the Pentagon’s budget and bring U.S. wars overseas to an end. According to Politico, “Biden’s transition team has appointed at least four retired generals or admirals and a former top enlisted Marine.”

While the president-elect has vowed to suspend arms sales to Saudi Arabia and end U.S. support for the kingdom’s catastrophic assault on Yemen, “the person Biden has reportedly picked to lead the Department of Defense is on the board of Raytheon, a key sup­pli­er of bombs to the U.S.-Saudi war in Yemen that has lob­bied aggressively in opposition to curbs on arms sales to the Sau­di-led coali­tion,” noted In These Times reporter Sarah Lazare.

The civil-military divide is ever growing and a life career military general overseeing the Department of War (DoD) won’t help.

Because he has been retired from the military for fewer than seven years, Austin—like President Donald Trump’s former Defense Secretary, retired Gen. Jim Mattis—must receive a congressional waiver to serve as head of the Pentagon.

“Mattis received a waiver with an 81-to-17 vote in the Senate and a 268-to-151 vote in the House, but the majority of those opposing him were Democrats or caucus with them,” the Washington Post reported Monday night. “They included Sens. Tammy Duckworth (Ill.), Elizabeth Warren (Mass.), Kirsten Gillibrand (N.Y.), Cory Booker (N.J.), and Bernie Sanders (I-Vt.).”

Jon Rainwater, executive director of advocacy group Peace Action, said Monday that Austin’s current role on the board of Raytheon—one of the largest military contractors in the world—is no mere “side issue” given the company’s stake in ongoing overseas conflicts.

“Biden will quickly face calls to block arms sales to the [United Arab Emirates] that include Raytheon missiles,” noted Rainwater, who said Congress must press Austin on such arms sales during his confirmation hearings.

“The revolving door between Pentagon and industry can easily impact policy,” Rainwater added. “We have here a double whammy: 1) Concerns about generals instead of civilians in charge and, 2) Working for a mega-contractor who benefits from some policies and whose profits are threatened by others.”

“American national security should not be defined by the bottom lines of Boeing, General Dynamics, and Raytheon,” Pocan said in a statement at the time. “Instead of draining the swamp, Donald Trump ensured that his Pentagon lined the pockets of America’s most profitable defense contractors. President-elect Joe Biden has an opportunity to take profits out of policy and build back better. The American people deserve a defense secretary that puts the American people’s safety above corporate profits.”

A Washington Echo Chamber for a New Cold War