“It would be outrageous and simply unacceptable for members of Congress to go home to their families when tens of millions of working-class families in this country are facing economic desperation.” 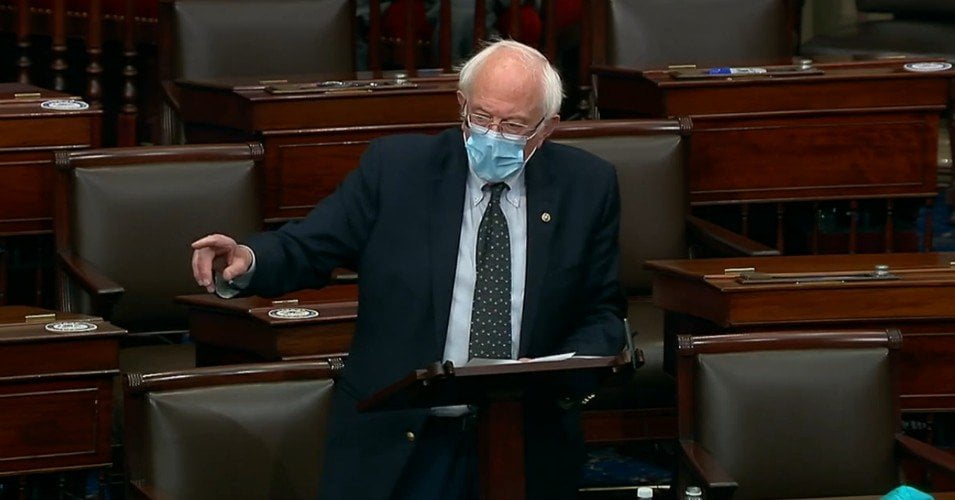 Warning that failure to approve additional direct relief would be a disastrous abdication of responsibility, Independent Sen. Bernie Sanders joined forces with Republican Sen. Josh Hawley on Thursday to introduce an amendment that would provide another round of $1,200 payments to working-class adults and $500 to each of their children.

Signifying the urgency of their demand, the senators are attempting to attach the amendment to spending legislation that must pass by Friday night to avert a government shutdown. While Hawley indicated he would not try to obstruct passage of the short-term spending bill if it doesn’t include direct payments, Sanders suggested he would be willing to delay the legislation in an effort to attach his amendment.

“Nobody wants to see the government shut down,” Sanders said in an appearance on CNN Thursday night. “But I think it would be outrageous and simply unacceptable for members of Congress to go home to their families when tens of millions of working-class families in this country are facing economic desperation, they don’t have the food, literally, to feed their kids, they’re worried about being evicted, they can’t afford healthcare, they have no income. We have got to address that.”

“I intend to do everything I can,” the Vermont senator added, “to make sure that we do.”

Similar to the direct relief provided under the CARES Act, the Sanders-Hawley amendment (pdf) would distribute one-time $1,200 payments to individuals who make up to $75,000 per year and joint filers who make up to $150,000 annually. The measure would also provide $500 for each child of eligible recipients.

“Working people are struggling. And they should be the first people given relief, not last,” Hawley said in a statement. “The crisis of rising unemployment claims, ever-expanding food lines, evictions, and growing credit card debt has been staring us in the face for months. It’s time we do something about it and provide emergency relief to Americans.”

In a speech on the Senate floor Thursday—just hours after the Labor Department reported that 1.3 million Americans filed for unemployment benefits last week—Sanders said refusal to approve direct payments would further cement the view that lawmakers are out of touch with the needs of their desperate constituents and primarily concerned with assuaging the wealthy and well-connected.

Sanders and Hawley unveiled their amendment as negotiations over a coronavirus relief package that lawmakers hoped to combine with must-pass year-end spending legislation appeared to falter once more on Thursday, as Senate Majority Leader Mitch McConnell (R-Ky.) shot down a bipartisan relief framework that members have been hashing out for more than a week.

McConnell’s chief complaint, according to the Associated Press, is that the corporate immunity provisions under discussion are not strong enough for Republicans to accept Democrats’ demand for state and local aid in return.

As it currently stands, the bipartisan plan also does not include direct cash payments, an omission that has led some progressive lawmakers—including Sanders—to oppose the package.

“In the midst of so much economic desperation, Congress cannot go on recess without providing this $1,200 emergency assistance to the American people in their time of need,” Sanders said in a statement Thursday. “I look forward to working across the aisle with Senator Hawley to ensure that the United States Senate passes this amendment.”