Published on
Monday, December 28, 2020
by
The Progressive

Covid-19 Exposed the Urgency for a Right to Housing

Without giving renters the option to buy their homes, this crisis could be even worse than the Great Recession. 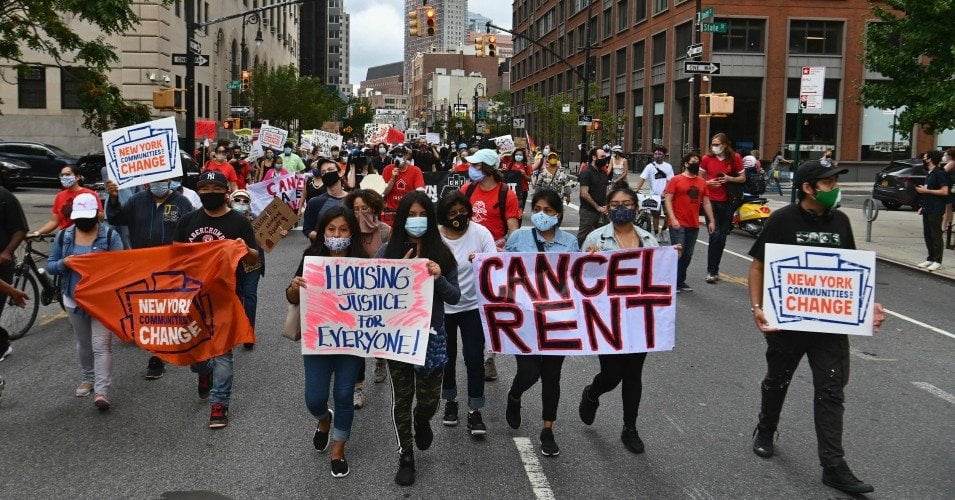 New York State Senator Zellnor Myrie saw the writing on the wall. After helping to enact landmark tenant protections in 2019, Myrie, whose district covers much of central Brooklyn, wanted to clear a pathway for those renters to become homeowners.

“Putting people on the path to home ownership has been a constant theme of the housing discussion in my district,” he tells The Progressive.

Because the housing market is cyclical, Myrie, along with housing advocates, worried that private equity firms and real estate giants would swoop in when the market dipped, opening up the potential for rising rents and further displacement.

“Almost six million Americans reported being somewhat-to-very likely to face eviction or foreclosure in the next two months.”“We wanted to give tenants the opportunity to own before these private interests came in and—really in a predatory fashion—gobbled up the market,” Myrie says. “Then COVID-19 happened and expedited all of those concerns, and now the housing market is extremely ripe for this sort of takeover.”

In October, New York State’s unemployment rate was 9.6 percent, with much higher rates in the New York City area—unemployment, for example, reached 17.5 percent in the Bronx. In July, one study found that 1.5 million New Yorkers were unable to pay rent and at-risk for eviction.

A November report from the Community Service Society of New York, a nonprofit research and advocacy group, found that “hundreds of thousands of tenants are already facing mounting rent arrears or daily trade-offs between paying rent and securing basic necessities.” It also warned that, “As rent payments decline, some landlords will fail to make mortgage payments on their properties, putting thousands of buildings on a path to financial distress and eventual foreclosure.”

In response, Myrie and housing advocates accelerated their efforts on the Tenant Opportunity to Purchase Act, which Myrie will introduce by early next year. The bill would require owners looking to sell to first offer current tenants, or a  housing organization designated by tenants, the option to buy the property.

The pandemic hasn’t just destabilized housing in New York. In November, the national unemployment rate was 6.7 percent—10.7 million people—down from the April peak of 14.7 percent, but almost double the unemployment rate in February.

By November, one in six renters were behind in their rent, and a third of all adults had trouble paying for basic household expenses. Almost six million Americans reported being somewhat-to-very likely to face eviction or foreclosure in the next two months, according to a  U.S. Census Bureau survey.

Because of a legacy of racist housing and socioeconomic policies in the United States, Black and Latinx Americans have suffered much higher rates of unemployment and housing instability during the crisis than their white counterparts, on top of also being more likely to both contract COVID-19 and die from it.

Some housing justice advocates in New York and around the country are worried that the impacts to affordable housing resulting from this economic recession could mirror those in the aftermath of the Great Recession.

When properties flooded the market after the 2008 crash, investment firms snatched up hundreds of thousands of cheap foreclosed homes. Private investment capital provided a necessary infusion for the market when no one else was able to buy.

Still, investors and big real estate corporations ended up making a killing by flipping homes or converting them to rental properties with raised rates. Their windfall has often come at the expense of lower-income residents, pricing out long-standing communities—especially communities of color.

The conditions of this recession are different. For starters, the last crisis was spurred by the failure to regulate the way single-family home mortgages were structured, rather than a public health crisis.

While homeowners took the biggest hit last time, “this crisis will have a much greater impact on renters proportionately and on the owners of multifamily and single-family rental properties,” says Carol Galante, who served as the assistant secretary for housing in the U.S. Department of Housing and Development under President Barack Obama.

While Galante notes there are still many unknowns, she is concerned that “unless we take certain actions, we could have a distressed rental market, particularly amongst what I would say is the small mom-and-pop owners of these properties.”

There are signs that Wall Street is gearing up to cash in on a potential crash. “Our thoughts and prayers are with all of our fellow Americans and nobody wants to capitalize on anybody’s misfortune,” an investment sales broker told the Wall Street Journal. “But I will tell you, real-estate investors—when you take the emotion out of it—many of them have been waiting for this for a decade.”

And they’re in a financial position to do it. By December 2019, private real-estate funds had reportedly amassed $142 billion for distressed-asset investments compared to $94 billion in 2008.

“Some housing justice advocates in New York and around the country are worried that the impacts to affordable housing resulting from this economic recession could mirror those in the aftermath of the Great Recession.”

“There’s a long list of these companies that for the most part came into existence, or super-scaled up after that crisis,” says Peter Cohen, co-director of the Council of Community Housing Organizations in San Francisco. “Those companies are still here. They’re heavily capitalized. They’re not housing providers first. They’re financial investment firms that happen to be in the business of making money off real estate . . . So it could even be worse.”

When U.S. Representative Ilhan Omar, Democrat of Minnesota, introduced her Rent and Mortgage Cancellation Act of 2020 this spring, she, too, included a “first right of purchase” component. The provision would give nonprofits, public housing agencies, cooperative housing associations, and community land trusts first dibs on multi-family properties put up for sale by owners.

A long list of cities, from Berkeley to Minneapolis, are pushing similar measures. New York City is contemplating its own legislation to give qualifying organizations first dibs, a version of which went into effect in San Francisco last year.

These types of policies are born out of demands for affordable housing preservation—ensuring existing affordable properties remain that way. Organizers—with communities of color often in the lead—have been slowly garnering support for right-to-purchase laws and building out complementary conduits for permanent affordable housing like community land trusts for years.

But these strategies have been gaining steam as affordable housing stock has plummeted by 60 percent between from 2010 to 2016, and especially as cities struggle with displacement of low-income residents and communities of color.

The current crisis brings these efforts into focus. In September, California Governor Gavin Newsom signed a law—inspired by the Moms 4 Housing Movement—that bans sellers from bundling foreclosed homes at auction for sale to a single buyer. It also gives tenants, affordable housing groups, and local governments an opportunity to beat the highest auction bid.

“The work that’s really pushing up housing preservation as a strategic kind of affordable housing tool is starting to get a lot of momentum,” Cohen says. COVID-19 “only accelerates the urgency of doing it now.”

Funding is certainly one of the biggest hurdles. Experts and advocates alike point out that right-to-purchase policies have little effect if tenants and organizations don’t have the capital to take advantage of them. And that’s a tall order given the economic circumstances.

In March, a long list of California housing organizations asked the state’s congressional delegation for $20 billion in aid to fund housing preservation and acquisition to that end. In May, the Stable Homes coalition, made up of some of the same groups, asked Newsom to direct $500 million of existing or future federal funds towards the cause.

Many advocates are hoping the incoming Biden Administration can unlock more funding. Biden wants to add $20 billion to the National Housing Trust Fund, a pot of money that states can use to fund affordable housing construction and preservation. Representative Omar’s bill—which might have a better chance if Democrats control the Senate—also included the establishment of an “Affordable Housing Acquisition Fund.”

Today, Myrie lives in the same rent-regulated apartment building where he grew up. He wishes  his neighbors had the opportunity to own the place they’ve lived in so long. Despite the uphill battle, for him, there is no better time to fight for a new housing model.

“This is a perfect opportunity for us to consider how we do housing writ large,” Myrie says. “We see an impending eviction crisis, a homelessness crisis that has been exacerbated by this pandemic, and it should really beg the question about why we cannot, as a society, house people as a right. This is the time for us to really consider how we can do that.”

Marisa Endicott is a freelance journalist reporting on inequity.

The Biden Administration Can Reverse Much of Trump’s Bad Labor Policy Without Congress
More in:
Economy, U.S.
,
Housing, Coronavirus, Inequality