“The Trump immigration agenda is defined by cruelty: it’s responsible for six children dying in cages, forced women into unnecessary surgeries including sterilizations, continued deportation flights in the middle of a pandemic.” 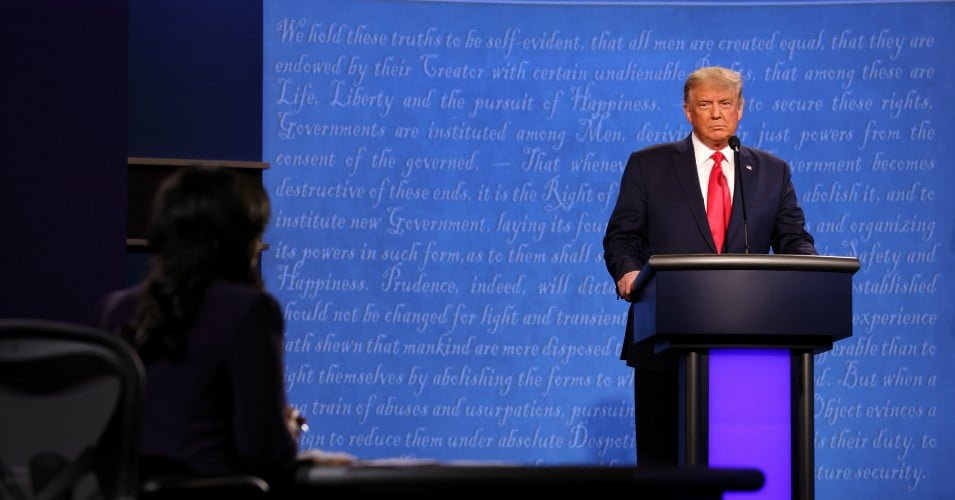 Pressed during Thursday night’s final 2020 presidential debate to account for his administration’s record of separating immigrant families at the U.S.-Mexico border, President Donald Trump repeatedly attempted to evade responsibility by lying about the origins of the inhumane practice, smearing those harmed by it, and attempting to shift blame onto Democratic opponent Joe Biden.

In response to a question about the more than 500 parents who have yet to be found after they were separated from their children under Trump administration’s “zero tolerance policy”—which forcibly broke up thousands of families before it was halted in June of 2018—President Donald Trump said that “children are brought here by coyotes and lots of bad people, cartels,” a claim immigrant rights groups rejected.

“Fact check: Migrant children separated by the Trump administration during Zero Tolerance came with their families, not coyotes,” the Refugee and Immigrant Center for Education and Legal Services tweeted. “We know. We worked with the children who were sent to shelters after being separated. Facts matter.”

The president—who openly declared in 2018 that “you have to take the children away”—went on to claim Thursday that the White House is “trying very hard” to reunite the families it separated, contradicting the accounts of attorneys who say the administration is not helping in their ongoing search for missing parents.

Q: The US can’t locate the parents of more than 500 children who were separated from them. How will they be reunited?

TRUMP: “These children are brought here by coyotes and lots of bad people, cartels, and they used to use them to get into our country.” pic.twitter.com/kDvTCwEOXR

In an effort to divert attention from his administration’s role in the family separations—which drew international outrage as they were carried out in 2018—Trump falsely claimed that the “zero tolerance” policy originated under the Obama administration.

The Obama administration did separate families at the border, but the Trump administration systematized and massively expanded the practice in 2018 before walking it back in the face of widespread outrage.

Trump also repeatedly said the Obama administration was responsible for constructing the cages where children were detained by the Trump administration. As the Washington Post’s Philip Bump noted, “It’s true that, in 2014, a surge in children arriving at the border prompted the Obama-Biden administration to build systems to house them while they were processed.”

“But Trump’s conflation of ‘building the cages’ with ‘using them to house kids taken from their parents’ is obviously ludicrous,” Bump added, “like excusing kidnapping a dozen people in your basement by arguing that you didn’t build your house.”

Trump never answered @kwelkernbc‘s question about how he’ll reunite them because he doesn’t have a plan. Worse, right now they couldn’t if they wanted to. They cannot be reached, because their record keeping was so shoddy.

Paola Luisi, director of the Families Belong Together coalition, said in a statement late Thursday that “Trump yet again lied on stage denying his role in family separation, despite the 545 children going to sleep alone tonight as a result of his policies.”

“The Trump administration ripped them away from their parents, lied about it, then lost track of them as they deported them into danger,” said Luisi. “The Trump immigration agenda is defined by cruelty: it’s responsible for six children dying in cages, forced women into unnecessary surgeries including sterilizations, continued deportation flights in the middle of a pandemic. Cruelty was always the plan. The American people believe families belong together—it’s time our elected officials uphold that.”

Biden, who slammed the Trump administration’s family separations as “criminal,” was also questioned on the Obama administration’s immigration policies, with moderator Kristen Welker noting that Obama “presided over record deportations, as well as family detentions at the border.”