We must seize the moment. The vision driving these movements, so long mocked and marginalized, must enter the political mainstream and begin to change the world. 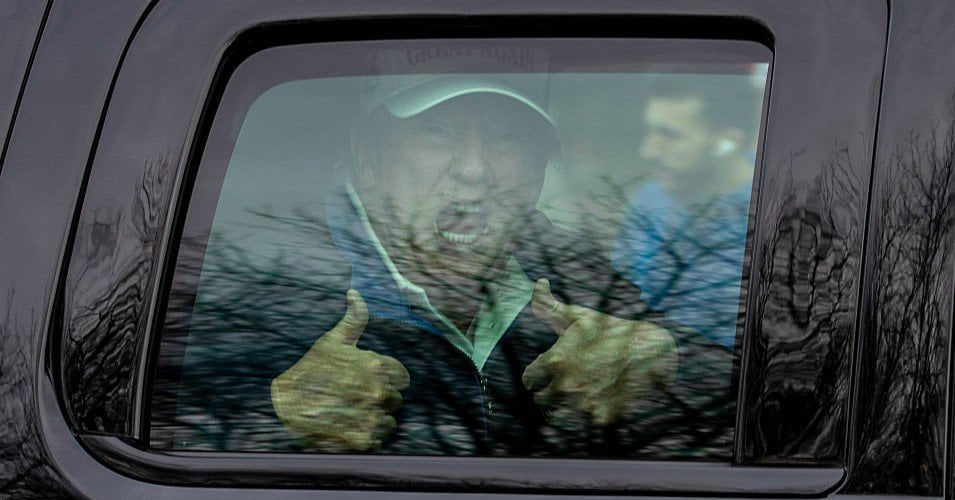 U.S. President Donald Trump gives thumbs up to supporters from this motorcade after he golfed at Trump National Golf Club on November 22, 2020 in Sterling, Virginia. The previous day Preisdent Donald Trump left a G20 summit virtual event “Pandemic Preparedness” to visit one of his golf clubs as virus has now killed more than 250,000 Americans. (Photo: Tasos Katopodis/Getty Images)

We have to take back the country, and what I really mean is take it “forward,” beyond situation normal — endless war, structural racism, consumer culture and ecological devastation — and into what one might call planetary stewardship.

Idealism, man! There’s nothing Americans are better at than mocking it. Nonetheless, beyond the mockery, I believe there is an enormous segment of the population that understands the need to create real peace and believes — or wants to believe — in a future that is not caged in the past. Does such a movement have any resonance, any hope of political traction?

“I believe there is an enormous segment of the population that understands the need to create real peace and believes — or wants to believe — in a future that is not caged in the past. Does such a movement have any resonance, any hope of political traction?”

Danny Sjursen puts it this way: “What seems certain is that, as ever, salvation won’t spring from the top. Don’t count on Status-quo Joe to slaughter Washington’s sacred cows of foreign policy or on his national security team to topple the golden calves of American empire.”

Nor will a vision of planetary salvation be willingly articulated by the mainstream media, which will report it only in binary terms: progressives vs. centrists, or whatever. For instance, in a typically dismissive headline recently, NBC News informed us: “Corporation-free zone: Progressives press Biden to lock out big business” as he puts together his cabinet. The job of the media is to turn a vision into a cliché — that’s the best way to prevent it from creating actual change.

You might say democracy itself is essentially a cliché at this point. The team Biden is putting together is full-speed-ahead military-industrial complex. No matter how ravaged the world is from endless wars, they will continue and we will not talk about them. America’s leadership role is 100 percent militaristic and selling weapons is what keeps everyone (who matters) happy.

Vince Cable, the former leader of the UK Liberal Democrats and a guy attuned to political realism, writing about the American political future in The Independent, believes there is only one way for money to be available for the Biden administration to address anything of value to the people who voted for him: “a big injection of dollars and political support into the armed services. . . .

“This is the one cause for which conservative Republicans may be willing to spend unlimited amounts of public money. The promise to build a new fighter jet in a Senator’s state is perhaps the one thing that might persuade him also to put more into health and education. . . .

“In the coming four years, Keynesian economics is not going to be delivered in the U.S. through a ‘Green New Deal’ but it may come about with the help of defense spending.”

So what’s coming up in the world beyond Trump is more of the same and then some: the relaunch of NATO, as Cable points out, and maybe a Cold War with China, along with “big arms deals with Taiwan, Japan and India.” This all feeds “a narrative, with which both Democrats and Republicans are aligned.”

Militarized unity! Of course Biden understands this. And this is the context progressives have to acknowledge; it’s the only context we have, and thus it’s the context in which a vision of global healing and transcending militarism must emerge. The cliché of American democracy would have us believe that the people have had their say and now it’s up to Biden to Make America Normal Again. See you in four years!

The Americans who have taken to the streets this year — and millions who haven’t — know otherwise. Now it’s time to keep our voices loud and vibrant, to push for change at many levels with more urgency than ever.

As George Monbiot wrote: “Trump stormed into the political vacuum. Chaotic and unscrupulous, in some respects he offended the neoliberal consensus, ripping up trade agreements, while in others he reinforced it. But the important point is that he was a monster the consensus created. His success was a product of the fake unity and fake healing of elite political agreement. When mainstream politics offered only humiliation and frustration, people turned to a virulent, demagogic anti-politics.”

Trump was the opposite of a visionary. He was a racist clown and liar who convinced almost half the electorate that his political incorrectness was real. Now that things are allegedly returning to a pre-Trump, centrist normal, we must, as Monbiot put it, “build and sustain social movements that are bigger than the Democratic Party.”

Left to the Dems, these movements would never get political traction:

• The movement not to defund but to rethink policing and, indeed, social order and security. Broken, impoverished communities need healing, not the presence of an occupying army. This is armed racism.

• The movement for empathy and compassion at the border, and for understanding that U.S. foreign policy is one of the major contributors to global displacement and the creation of refugees.

• The movement to demilitarize foreign policy, dismantle and abolish nuclear weapons, slash the military budget and rethink our relationship with Planet Earth. What does it mean that we all live on one planet?

• The movement to recognize and begin addressing the planet’s climate emergency, move beyond fossil fuels, recycle all “waste” and reconnect with nature.

And so much more! Activists must seize the moment. The vision driving these movements, so long mocked and marginalized, must enter the political mainstream and begin to change the world. The time is now.

Robert Koehler is an award-winning, Chicago-based journalist and nationally syndicated writer. His book, “Courage Grows Strong at the Wound” (2016). Contact him or visit his website at commonwonders.com.

TokyoProgressive supports and participates in projects of like-minded people and groups directly (technical, editing, design) and not-so directly (financial or moral support). Likewise, we also welcome contributions by readers that are consistent with promoting social justice. If you have a project you would like help with, or if you would like to submit an article, link, or report on a protest activity, please contact us here.
dolor Aliquam ut fringilla leo. vulputate, Curabitur