Donald Trump, the Mr. Magoo of geopolitics, has shot his big mouth off again and incited warfare between Egypt and Ethiopia.

Trump said, according to the BBC, that Egypt cannot accept the Grand Ethiopian Renaissance Dam that is being built on the Blue Nile, which the government of Abdel Fattah al-Sisi believes will reduce water flow to Egypt. Trump went on to crack that Egypt might “blow it up.”

The head of state of a superpower cannot afford to speak this way. What Addis Abbaba heard was that al-Sisi likely said some such thing to Trump, which the blabber-mouth-in-chief was now inadvertently making public.

Ethiopia’s foreign minister, Gedu Andargachew, angrily summoned the US ambassador in Addis Ababa, Michael Raynor, on the mat to explain Trump’s wild comments. Raynor is a career foreign service professional and must be really tired of having to explain Trump to people. Andargachew told Raynor, “It is unacceptable for the current American president to incite war between Ethiopia and Egypt.”

Egypt’s minister of water resources and irrigation, Muhmmad `Abd al-`Ati, complained last week that no progress has been made with Ethiopia on negotiations over the Renaissance Dam, despite a 2015 agreement on principles. After Trump’s comment, `Abd al-`Ati came out to blame Ethiopia for having caused the failure of Washington’s diplomatic initiative to resolve the conflict.

The two goliaths of northeast Africa are at odds over this giant dam of Ethiopia’s. There are two Niles below Sudan, which flow together as one river through Egypt up to the Mediterranean. The White Nile originates in Tanzania and is unaffected by the dam. The Blue Nile originates in Ethiopia and flows up to Sudan, where it joins the White Nile and proceeds through Egypt.

Ethiopia is building the Grand Ethiopian Renaissance Dam on the Blue Nile in its territory to generate electricity. This seems a shame because Ethiopia is rich in sunlight and wind and if it had spent as much money on wind and solar farms as it is putting into the dam, I think it could have had the electricity without putting Sudanese and Egyptians in danger of not having enough water. 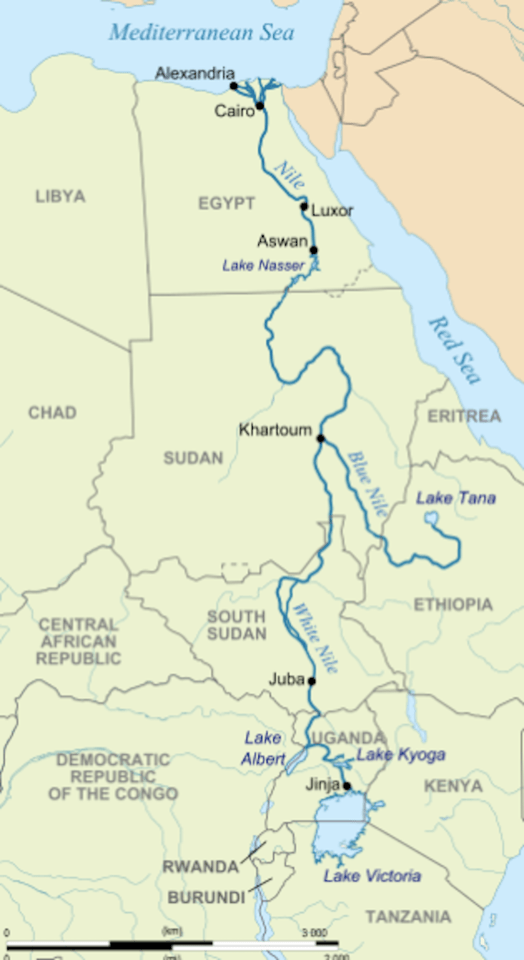 Ethiopian prime minister Abiy Ahmed maintains, like his predecessors, that the dam will not interfere with the flow of water to water-poor Egypt. It is true that if the reservoir created by the dam is filled very, very slowly, over years, the impact on the Egyptian water supply can be reduced. In wet years, thereafter, the dam should not have a significant impact on Egypt. But a recent study in Nature suggested that if there is another multi-year drought, the Renaissance Dam could act as a multiplier in reducing Egypt’s water supply.

The reservoir also has a bigger surface than the river, and as global heating advances, it could lead to substantial evaporation of precious water.

I lived in Egypt all together something like three or four years on and off between 1976 and 2014, and I think I was rained on three times, briefly. Egypt would just be the northeastern edge of the Sahara if it were not for the Nile. Most people live along its banks. The ancient Greek historian Herodotus called Egypt “the gift of the Nile,” and he was not wrong. Egypt, with 100 million people, does not have enough water. It needs to build some solar-driven water purification plants, but has not done so yet.

Egypt did once fight a modern war with Ethiopia, in 1874-76, when Cairo had expanded south into the Sudan and beyond in search of land on which to grow cotton for the world market. The Ottoman viceroy or Khedive Isma`il prosecuted this war. I once saw some documents on it in the Egyptian archives. Egypt was decisively defeated, and the loss contributed to Ismai`il’s weakening and the loss of confidence in him of the European Powers. He was deposed in 1879.

As for the Mr. Magoo reference, I was a little afraid it was a Boomer thing that wouldn’t be any longer widely understood. But I checked and there is a new ‘Mr. Magoo’ series on CBS All-Access just this year. For those who don’t know, in the cartoon he is a near-sighted older gentleman whose inability to see clearly leads him into hilarious misunderstandings and confuses everyone around him. Whatever is wrong with Trump seems to operate similarly.

Mr. Magoo sometimes in the cartoons imagines that he has been conscripted and caught up in a war. I don’t know if he ever provoked one.

Trump is much more terrifying, if equally cartoonish.