“It’s OK to laugh at this hilarious clown car and yet appreciate that what’s going here is deadly serious. These tactics will go nowhere but still infect our democracy with doubt.” 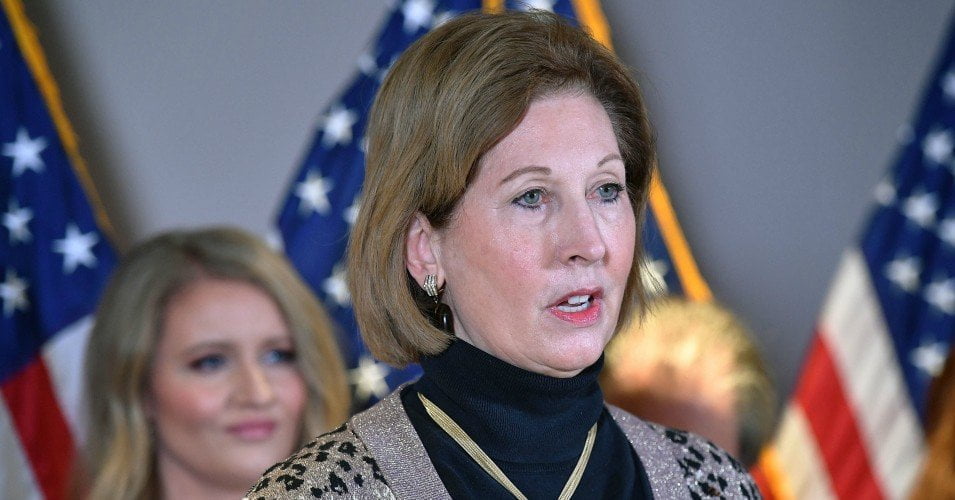 With the Trump campaign’s amateurish, absurd, but nonetheless dangerous attempt to overturn the results of the November election continuing to flop in court, members of the president’s legal team late Sunday issued a statement distancing themselves from right-wing attorney Sidney Powell after she spent the past several days peddling bizarre and entirely baseless claims of vote hacking involving Venezuela, Cuba, and “communist money.”

Trump attorneys Rudy Giuliani and Jenna Ellis said Powell is “practicing law on her own” and “is not a member of the Trump Legal Team,” a statement that comes just days after Powell appeared at a press conference with Giuliani and Ellis at Republican National Committee headquarters in Washington, D.C., where the trio rambled on about a vast conspiracy against the president for which there is zero evidence.

“She is also not a lawyer for the president in his personal capacity,” Giuliani and Ellis added.

An unnamed Trump campaign official told the Washington Post late Sunday that Trump had come to believe Powell was damaging the credibility of his already floundering legal ploy. “She was too crazy even for the president,” the official remarked, not mentioning the fact that Trump has readily touted Powell’s narrative in recent social media posts and hailed her as part of his “truly great” legal team.

During the Trump attorneys’ press conference last week, Ellis described Powell as part of an “elite strike force” of lawyers expertly working to advance the Trump campaign’s legal aims—a characterization that critics didn’t hesitate to mock while also stressing the very real threat posed by the ongoing coup attempt and the lasting damage it could inflict.

“It’s OK to laugh at this hilarious clown car and yet appreciate that what’s going here is deadly serious,” tweeted attorney Deepak Gupta. “These tactics will go nowhere but still infect our democracy with doubt. Meanwhile, the transition delays risk grave harm to public health and economic and national security.”

But I thought she was part of “an elite strike force team that is working on behalf of the president and the campaign.” https://t.co/SLDWtQFusE

The attempt by Trump’s top attorneys to disavow Powell came a day after a federal judge dismissed the campaign’s last-ditch attempt to stop Pennsylvania from certifying its election results, a move expected to come Monday. In his blunt ruling (pdf) over the weekend, U.S. District Court Judge Matthew Brann said the Trump campaign’s complaint was riddled with “strained arguments” and “speculative accusations.”

Kristen Clarke, president and executive director of the Lawyers’ Committee for Civil Rights Under Law, a group that intervened in the Pennsylvania case, said in a statement that Brann’s ruling “should put the nail in the coffin on any further attempts by President Trump to use the federal courts to rewrite the outcome of the 2020 election.”

“The court could not be any clearer in underscoring the baseless and meritless nature of the claims presented in this case,” said Clarke. “Voters across the Commonwealth overcame tremendous obstacles to register their voice and this suit sought to disenfranchise them without a scintilla of evidence.”