'Great News for Progressives Around the World': International Applause After US Voters Fire Donald Trump

“It’s time to get back to building bridges, not walls.” Leaders from around the world congratulate the Democrats, but say much damage done by Trump requires repair. 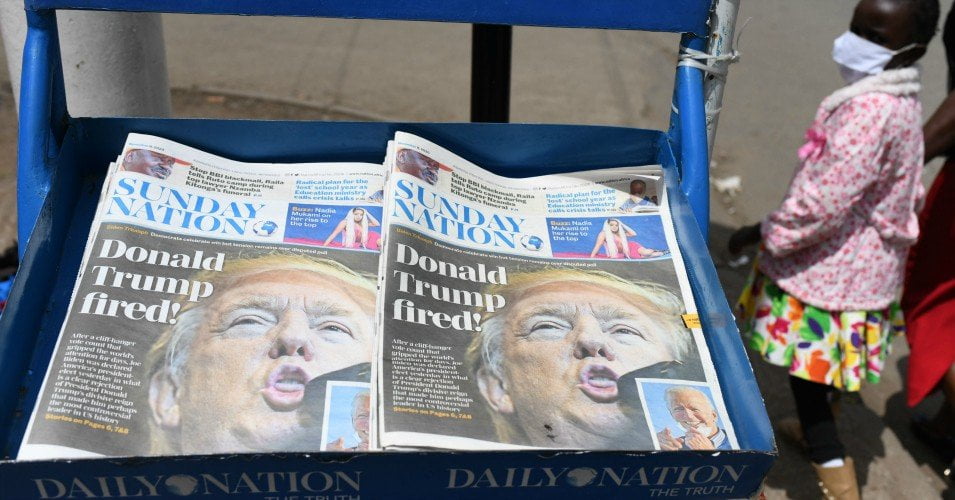 Celebrations took place across the globe and congratulations from world leaders for U.S. President-elect Joe Biden and Vice President-election Kamala Harris poured in Saturday and into Sunday after the Democratic ticket was declared the decisive winner in the 2020 election and results showed that President Donald J. Trump had been soundly “fired” by the American people.

“Great news for progressives around the world that Joe Biden and Kamala Harris have defeated Trump,” tweeted former Labour Party leader Jeremy Corbyn from the United Kingdom, one of America’s longest and closest allies. “Let’s work together internationally to build a better, fairer, greener, peaceful and more equal world.”

From London, the city’s progressive Mayor Sadiq Khan—who often clashed with Trump and denounced the U.S. president’s racism—congratulated both Biden and Harris on their victory. “London looks forward to working with you,” Khan tweeted. “It’s time to get back to building bridges, not walls.”

“Congratulations President-elect Joe Biden and Kamala Harris on your victory in the U.S. presidential election,” Arden declared in an Instagram post. “With so many issues facing the international community, your message of unity is one we share. New Zealand looks forward to working with you both!”

While Trump, as of this writing, has still refused to acknowledge his defeat or issue a concession, Slate’s Ben Mathis-Lilley on Saturday explained that Biden’s victory is quite decisive in historical terms:

Defeating a sitting United States president is an extraordinarily hard thing to do, but with the vote count mounting in his favor, Biden turns out to have done it with relative ease. Per current estimates, he will receive something like 51.3 percent of the national popular vote, 3 percentage points more than Hillary Clinton and a higher total than any candidate challenging an incumbent president since FDR got 57 percent against Herbert Hoover in 1932. That’s more than Ronald Reagan got (50.7 percent) in his 1980 win over Jimmy Carter, which is still (accurately!) heralded as a paradigm shift in American politics.

Mahmoud Abbas, President of the Palestinian Authority, also congratulated the pair in a Sunday statement and urged the new U.S. administration to “strengthen the Palestinian-American relationship” as a way to foster “peace, stability, and security” throughout the Middle East region. Israel’s Prime Minister Benjamin Netanyahu, meanwhile, tweeted: “Joe, we’ve had a long & warm personal relationship for nearly 40 years, and I know you as a great friend of Israel.”

From Iran, Foreign Minister Javad Zarif—who criticized Trump relentlessly for imposing brutal sanctions on the Iranian people and pulling out of the international nuclear agreement that was implemented under the Obama-Biden administration—suggested it was a new day for future relations between the two nations. “The American people have spoken,” said Zarif.

The American people have spoken.

And the world is watching whether the new leaders will abandon disastrous lawless bullying of outgoing regime—and accept multilateralism, cooperation & respect for law.

Separately, Iran’s Vice-President Eshagh Jahangiri said his government hopes for “a change in the destructive policies of the United States, a return to the rule of law and international obligations, and respect for nations” now that Trump will soon be leaving the White House.

And President Hassan Rouhani said Sunday that Biden must work to repair the damage done by Trump and the betrayal committed against previous international commitments made by the United States.

“An opportunity has arisen now for the next U.S. administration to make up for the past mistakes and return to the course of commitment to international obligations by respecting international principles,” Rouhani said. “The Islamic Republic,” he added, “considers constructive interaction with the world to be its strategy.”

Mexico President Andrés Manuel López Obrador took a more hesitant approach to the U.S. election results, indicating in a Saturday statement that he would withhold his congratulations until any legal challenges related to vote count were resolved or when the results are officially certified.

“With regard to the U.S. election, we are going to wait until all the legal matters have been resolved,” López Obrador said at a news conference.  “I can’t congratulate one candidate or the other. I want to wait until the electoral process is over.”

But most people of the world—like most within the United States—have been able to see that Biden’s win was decisive, and despite Trump’s refusal to concede and his continued unhinged proclamations that he won when all the evidence shows he clearly lost, led to street celebrations both in the U.S. and abroad.

As Slate reports, fireworks erupted across Europe and people across the continent were queuing up for champagne at local shops and dancing in the streets.

Trump and the GOP Don't Care About Your Grandchildren
More in:
World
,
Donald Trump, Election 2020