'Holidays Can't Be Jolly If Your Family Is Not Safely Housed': Progressives Urge CDC to Extend Eviction Moratorium

“Allowing tens of millions of people to be evicted in the dead of winter in the middle of a resurgence of Covid-19 cases and deaths is unconscionable.” 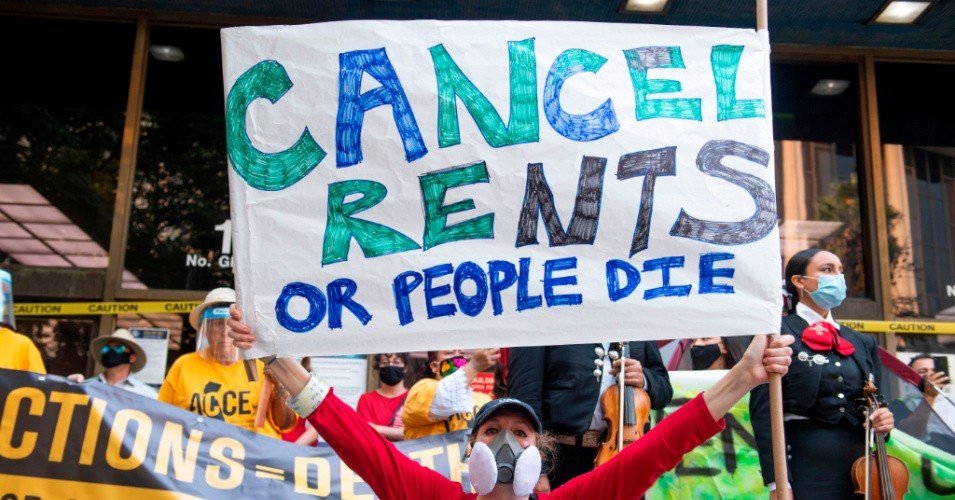 Tens of millions of people at risk of eviction in one week “can’t wait for Trump and McConnell to get on the same page,” said former HUD secretary Julián Castro, adding that the CDC “must extend the moratorium immediately.” (Photo: Valerie Macon/AFP via Getty Images)

Warning that President Donald Trump’s refusal to sign the recently passed coronavirus relief bill could have devastating consequences for tens of millions of American families on the brink of homelessness, housing justice advocates are urging the CDC to act immediately—independently of the president and Congress, if necessary—to avert a humanitarian disaster by extending the federal eviction moratorium set to expire at year’s end amid a surging pandemic and plunging temperatures.

Although critics of the roughly $900 billion aid package say it would deliver an inadequate amount of assistance to U.S. households and reflects a bipartisan commitment to austerity even in the midst of an economic calamity, it does include crucial, life-saving items, not least of which is an extension of the national eviction moratorium through January 31 as well as the provision of $25 billion in emergency rental assistance.

“We’re facing potentially the worst housing and homelessness crisis in our country’s history. The least the federal government can do during a once-in-a-century pandemic is assure each of us that we’re not going to lose our homes in the middle of it.”
—Diane Yentel, NLIHC

Prolonging the moratorium by only one month is insufficient and $25 billion is only a quarter of what the National Low-Income Housing Coalition (NLIHC) says is needed, but as a result of Trump’s last-minute disapproval of the relief bill, millions of renters who collectively owe $70 billion in back-rent and are on the verge of a life-threatening eviction will receive no help from the federal government and will be stripped of tenant protections on New Year’s Eve.

Sen. Bernie Sanders (I-Vt.) and Democrats—including Georgia Senate candidates Jon Ossoff and Raphael Warnock, whose victories on Jan. 5 would disempower Senate Majority Leader Mitch McConnell (R-Ky.) by ending GOP control of the chamber—have endorsed Trump’s call to increase the direct payments in the relief bill from $600 to $2,000, while Republicans rejected it.

As Sanders pointed out, however, it would be a mistake to treat the existing Covid-19 aid package and bigger checks as an either-or proposition. The democratic socialist lawmaker said that Trump must sign the relief bill to prevent unemployment insurance and housing protections from lapsing, while also insisting that Congress approve $2,000 direct payments.

If Trump follows through on his threat to veto the legislation, a government shutdown will ensue, and “tens of millions of Americans will lose their unemployment benefits, go hungry, and face eviction,” Sanders tweeted, calling it “a level of governmental cruelty not seen in our lifetimes.”

“The least the federal government can do during a once-in-a-century pandemic,” she added, “is assure each of us that we’re not going to lose our homes in the middle of it.”

In a letter (pdf) sent to CDC director Robert Redfield on Dec. 16, the NLIHC and more than 1,500 housing organizations that co-signed requested funding for emergency rental assistance and an extension of the federal eviction moratorium issued in early September by the public health agency. Until Trump’s Tuesday night curveball, it looked as if the groups had secured a partial victory, with the congressional aid package representing an important start.

With the relief bill now in limbo, the moratorium’s original expiration date of December 31 is rapidly approaching, as are the deadly consequences associated with tens of millions of people being displaced in the midst of freezing temperatures and while the Covid-19 pandemic is at its peak.

Allowing tens of millions of people to be evicted in the dead of winter in the middle of a resurgence of #COVID19 cases & deaths is unconscionable, & would have lasting harmful impacts to children, families, communities & our country’s ability to contain the virus. @dianeyentel https://t.co/U2ff2ZYctd

Although the CDC’s intervention was imperfect—containing loopholes that some landlords took advantage of to evict tenants during the pandemic—it did prevent millions of additional renters from being kicked out of their homes.

Housing justice advocates this week, acting with a renewed sense of urgency, are reiterating their demand to Redfield for the CDC “to take immediate action to prevent a catastrophic wave of evictions this winter by extending, improving, and enforcing the federal eviction moratorium.”

Former HUD secretary Julián Castro tweeted that the tens of millions of people at risk of being tossed from their homes in one week “can’t wait for Trump and McConnell to get on the same page,” adding that the CDC “must extend the moratorium immediately.”

In one week, the moratorium on evictions lapses and tens of millions could be tossed out of their homes.

They can’t wait for Trump and McConnell to get on the same page—the @CDCgov must extend the moratorium immediately. https://t.co/Lz587x2EYI

In addition to pressuring Congress and the CDC, the NLIHC is also demanding that governors and mayors protect their residents. Yentel called reluctance to do so “baffling.” If millions of people are evicted, she said, state and city officials “will have to respond to the homelessness crisis.”

The Partnership for the Homeless, one of the signatories to the letter, noted that “the holidays can’t be jolly if your family is not safely housed.”