Published on
Saturday, December 19, 2020
by
The Progressive

With the pandemic making shelter more crucial than ever, activists are fighting for everyone’s right to a place to live—regardless of income or background. 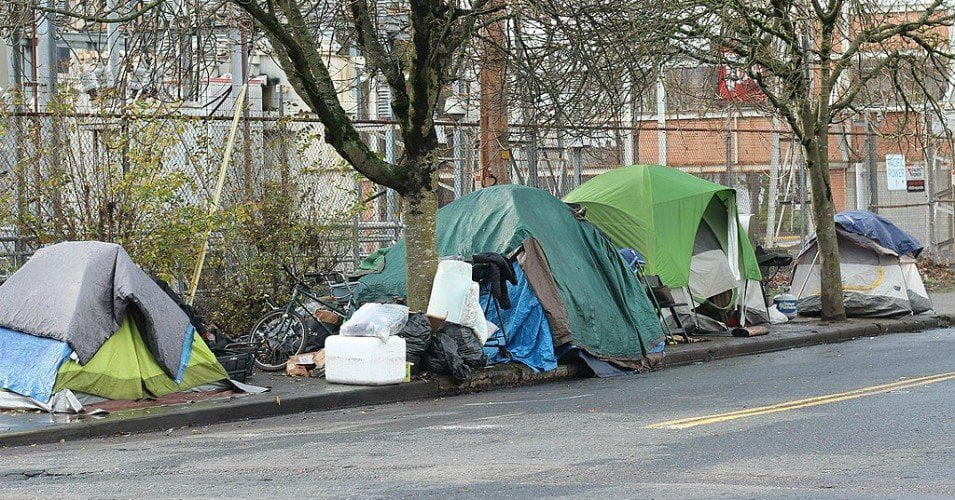 A homeless encampment in Portland, Oregon. (Photo via Wikimedia Commons)

When grassroots housing justice activists—tenants, unhoused folks, and renters living in both public and privately owned buildings—were brought together by People’s Action in 2017, they began to strategize about how best to promote housing as a human right.

Linda Armitage, a board member from Chicago’s Jane Addams Senior Caucus, was at that meeting.

“We started talking about different issues including the need for protection against arbitrary evictions and the need for rent controls, but as we debated, we decided that the best way to put teeth into the idea was to put forward a homes guarantee,” Armitage tells The Progressive. “Many of us had experienced housing insecurity ourselves, and we began to imagine a world in which people lived in environmentally sound homes that they could not be thrown out of if they fell on hard times.”

“A Homes Guarantee is a matter of political and social will, and is not anything radical.” —Linda Armitage, Jane Addams Senior Caucus

For a year and a half, People’s Action worked to iron out the nuts and bolts of its vision, creating a national housing plan to turn housing from a salable commodity into a universally available public good.

These efforts led to the Homes Guarantee Campaign, which launched in the fall of 2019. “Everyone living in the United States should have safe, accessible, sustainable and permanently affordable housing,” the campaign’s briefing book begins. “Everyone—no matter their income, background, or their conformity to social or legal norms—has the right to a home.”

The multi-dimensional campaign calls for the construction of twelve million publicly owned social housing units to be managed by municipal governments, community land trusts, community-based organizations, or the residents themselves; reinvestment in the 1.1 million largely deteriorated public-housing apartments that presently exist; an end to real-estate speculation; and reparations for centuries of racist housing policies, including redlining and other lending restrictions that have led to housing segregation in every part of the country. Organizers expect initial funding to come from a $1 trillion federal outlay.

“A Homes Guarantee is a matter of political and social will, and is not anything radical,” Armitage says. “Some people say it sounds like pie in the sky, and maybe they’re right that it won’t be achieved anytime soon. But I see it differently. We’re laying the groundwork so that the children, grandchildren, or great grandchildren who come after us will not have to worry about finding a decent or affordable place to live.”

In fact, Armitage notes, the idea of a guaranteed right to shelter is nothing new. President Franklin Delano Roosevelt’s 1944 State of the Union address proposed a Second Bill of Rights, which included “the right of every family to a decent home.”

Although FDR died before he could make headway on this goal, four years later, in 1948, the Universal Declaration of Human Rights was issued by the United Nations. The document’s Article 25 affirms that “everyone has the right to a standard of living adequate to the health and well-being of himself [sic] and his family, including food, clothing, housing, and medical care and necessary social services.”

Nonetheless, it has taken more than seventy years, until the Homes Guarantee campaign took off, for the domestically dormant idea to once again gain traction.

Tara Raghuveer, the Missouri-based director of the Homes Guarantee campaign, notes that Senator Bernie Sanders, Independent of Vermont, made the Homes Guarantee the centerpiece of his housing platform. Similarly, three newly elected democratic members of Congress—Jamaal Bowman of New York, Cori Bush of Missouri, and Marie Newman of Illinois—also support it, as do Squad members Representatives Ilhan Omar of Minnesota and Alexandria Ocasio-Cortez of New York.

Despite this momentum, COVID-19 and the economic instability it’s caused have pushed those working on the guarantee to temporarily shift gears and embrace more immediate concerns. Among them, a call to cancel rent retroactive to April 1 and  impose a meaningful, loophole-free eviction moratorium through 2021.

These incremental steps, Raghuveer says, are “a step toward a Homes Guarantee, since they  directly intervene in the relationship between tenant and landlord and shift the power dynamic a bit.”

In addition to supporting these measures, People’s Action and the Homes Guarantee Campaign are calling for other short-term reforms. Among them: Congressional repeal of the Faircloth Amendment, which has banned the construction of new public housing since 1998.

They also want to stop landlords who receive federal rent subsidies from arbitrarily evicting tenants without reasonable cause, impose national rent controls, and ban rent hikes for at least a year after the COVID-19 pandemic ends. And they are calling for the creation of a Social Housing Development Authority to permit state, local, and federal entities to purchase, rehab, and permanently oversee buildings that have fallen into foreclosure.

“The biggest threat to our community is gentrification,” says Otis Ubriaco, a member of Lancaster Stands Up, one of more than 115 organizations that support the Homes Guarantee. “Already, more than a third of renters in Lancaster County spend more than 30 percent of their income on rent and many spend 50 percent or more.”

Prior to the pandemic, Ubriaco says, Lancaster Stands Up held numerous forums and public meetings to talk about the burgeoning affordable housing crisis in the area. “We spoke to people and asked them what a Homes Guarantee would mean for them. One guy said it best: ‘After a long day, every single person needs to have a place to take a deep breath, a private, secure space where they can fully be themselves.’ ”

Raghuveer agrees that the desire for a place to call home is universal, something evidenced by the support the Homes Guarantee Campaign has received from longtime progressive activists, faith groups, unions, community-based housing organizations, and senior-citizen assemblies.

“The grassroots leaders who created this vision will not be satisfied with reforms that dance around the edges of what’s needed,” she says. “The social conditions of today are untenable. The United States is the richest country in the world. We can and we must guarantee that everyone has a home.”

Eleanor J. Bader is a teacher, freelance writer and activist from Brooklyn, NY. She is also the co-author of Targets of Hatred: Anti-Abortion Terrorism, St. Martin’s Press, 2001.