'Hunger Like They've Never Seen It Before': US Food Banks Struggle as 1 in 6 Families With Children Don't Have Enough to Eat

“We’re now seeing families who had an emergency fund but it’s gone and they’re at the end of their rope,” said one Texas food bank director. 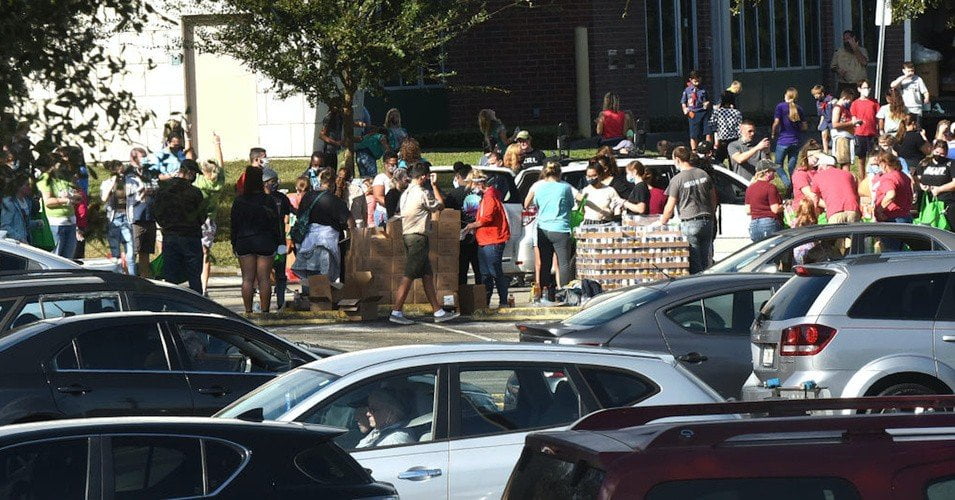 One in six U.S. families with children don’t have enough to eat this holiday season, a national emergency exacerbated by the coronavirus pandemic and the unemployment crisis it has generated. Over the past several days, remarkable reporting in the Washington Post and National Geographic, among other outlets, has explored this alarming trend.

According to Feeding America, the largest hunger relief organization in the U.S., more than 50 million people will experience food insecurity by the end of the year. Among U.S. children, the figure rises to one in four. The group, which runs a network of some 200 food banks across the nation, says it distributed over half a billion meals last month alone, a 52% increase from an average pre-pandemic month.

The latest U.S. Census Bureau pandemic survey, published earlier this month, found that fewer than half of U.S. households with children were “very confident” they could afford to provide enough food for their families in the next month.

By the end of this year, more than 50 million people could experience food insecurity, according to @FeedingAmerica, the country’s largest hunger-relief organization https://t.co/t6Vc9d0x5T

As is so often the case when it comes to matters of economic inequality, Black, Latinx, and Indigenous communities are disproportionately impacted by the hunger crisis. Among the 25 U.S. counties experiencing the worst food insecurity, only four have majority white populations, all of them in rural Kentucky. Census Bureau data reveals that fully 27% of Black and 23% of Latinx households with children reported not having enough to eat over the past week—compared with just 12% of white families.

“This is a story about racial and ethnic disparities—both food insecurity and the story of coronavirus,” Emily Engelhard, managing director of Feeding America’s research unit, told National Geographic. “The populations and geographies that started in the most disadvantageous state of food insecurity are the ones that are getting hit the hardest” during the pandemic.

This is the reality we’re dealing with now. Nearly 26 million Americans say they didn’t have enough to eat in the past week.

No one should be too poor to buy food for Thanksgiving. https://t.co/QyhTN4MwLp

In northeastern Ohio, the Greater Cleveland Food Bank planned to distribute 12,000 meals, a 5,000-meal increase from a year ago.

“We’re now seeing families who had an emergency fund but it’s gone and they’re at the end of their rope,” Kristin Warzocha, president of the Greater Cleveland Food Bank, told the Guardian. “We’re going to be doing this for a really long time, and that’s frankly terrifying given the impact hunger has on physical health, learning and development for children, and parents’ stress.”

In Texas’ second-largest city, the San Antonio Food Bank distributes eight semi-trucks full of food every day, but still was forced to resort to rationing due to soaring need.

“Covid-19 has taken so much, people’s jobs, their loved ones, and now we’re just trying to stop it from taking Thanksgiving,” San Antonio Food Bank CEO Eric Cooper told CNBC. “Pre-pandemic we were feeding around 60,000 people a week, and now we’re seeing around 120,000… and most of those are new to the food bank. They’ve never had to ask for help before.”

Indeed, among the thousands of cars that lined up starting in the pre-dawn hours for free Thanksgiving meals at Houston’s NRG Stadium last weekend, there were more than a few luxury makes.

“I was just telling my mom, ‘You look at people pulling up in Mercedes and stuff, come on,'” Randy Young, a recently laid-off cook at the stadium who was waiting in line with his elderly mother, told the Post. “If a person driving a Mercedes is in need of food, you know it’s bad.”

“It’s been hard to survive,” Young said. “Money is low. No jobs. Hard to find work.”

Loudoun County, Virginia is per capita the wealthiest county in the nation, with a median household income of just under $140,000. Yet the Post reports Loudoun Hunger Relief recently handed out meals to 887 households in one recent week, a 300% increase from pre-pandemic activity.

“We are continuing to see people who have never used our services before,” Jennifer Montgomery, Loudoun Hunger Relief’s executive director, told the Post.

In the nation’s largest city, Food Bank for NYC president Leslie Gordon told France 24 that “even before the pandemic, there were 1.5 million residents here across the five boroughs who didn’t always know where their next meal was coming from or what it would be, and that’s escalated considerably to nearly two million of our neighbors.”

“Across the country demand has not let up, and food banks do everything they can to make sure families have food on the table for Thanksgiving,” Zuani Villareal, a spokesperson for Feeding America told the Guardian. “There’s no end in sight, but we can’t be the only solution.”

Celia Call, CEO of Feeding Texas, stressed to the Post that “without sustained aid at the federal level, we’ll be hard-pressed to keep up” with demand. “We’re just bracing for the worst,” she added.

Several progressive lawmakers tweeted the Post article over the past two days. One of them, Rep. Ro Khanna (D-Calif.), said that “Congress has the power to address this crisis,” and asked, “Why aren’t we doing it?”

We’re facing an unprecedented hunger crisis in America. 26 million people, or 1 in 8 Americans, are going hungry. In the richest nation in the world, that’s unconscionable.

Congress has the power to address this crisis. Why aren’t we doing it?https://t.co/us7aikA1h9

We actively work to end hunger around the world, but still haven’t gotten serious about ending it here in America. Eradicating hunger should be a priority.

When I came to America 25yrs ago, it was shocking to see people line up to get food & it still is. https://t.co/OETr7eWpTc