"I'd Like to Report Some Voter Fraud": Lindsey Graham Under Fire for Allegations He Urged Legal Ballots Be Tossed in Georgia

“Under the guise of rooting out election fraud, it looks like Graham is suggesting committing it.” 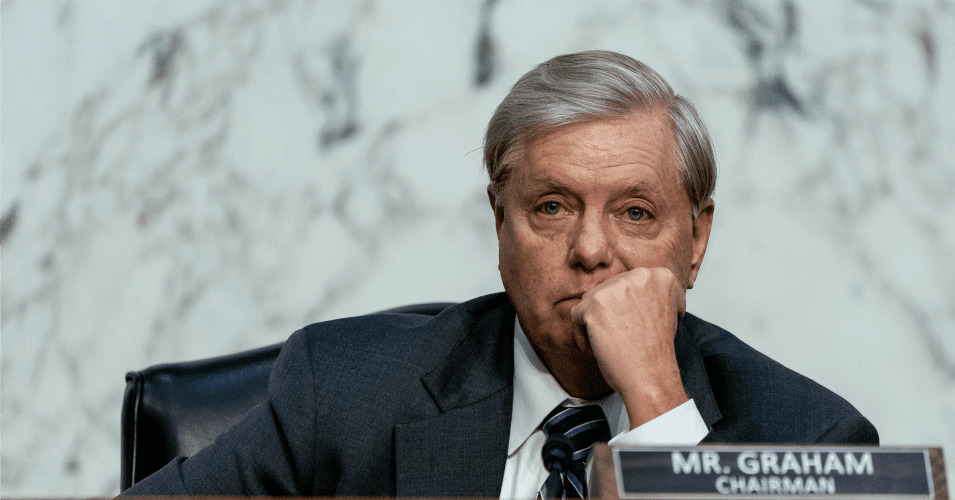 Demands for an investigation and calls for Sen. Lindsey Graham of South Carolina to step down from his powerful position as chairman of the Senate Judiciary Committee erupted late Monday night after Georgia’s Republican Secretary of State Brad Raffensperger said Graham, in a private conversation, suggested he throw out legally cast ballots in order to help President Donald Trump win the state which the initial count showed he lost by more than 14,000 votes.

While Raffensberger has ordered a hand recount of all state ballots to be completed ahead of a certification deadline on Nov. 20, he told the Washington Post in an interview that Graham was among numerous members of his own party, inside and outside of Georgia, pressuring him to invalidate ballots—urgings made alongside conspiracy theories and baseless allegations about the integrity of the election that have even led to death threats against him and his family.

“Other than getting you angry, it’s also very disillusioning,” Raffensperger told the Post of the threats, “particularly when it comes from people on my side of the aisle. Everyone that is working on this needs to elevate their speech. We need to be thoughtful and careful about what we say.”

Raffensberger also recounted to the post a conversation he had with Graham on Friday:

Raffensperger said he was stunned that Graham appeared to suggest that he find a way to toss legally cast ballots. Absent court intervention, Raffensperger doesn’t have the power to do what Graham suggested because counties administer elections in Georgia.

“It sure looked like he was wanting to go down that road,” Raffensperger said.

In response to the news, Noah Bookbinder, executive director of Citizens for Responsibility and Ethics in Washington (CREW), said Graham’s alleged behavior should be considered nothing less than election interference.

“For the chairman of the Senate committee charged with oversight of our legal system to have reportedly suggested that an election official toss out large numbers of legal ballots from American voters is appalling,” Bookbinder said. “Not only is it wrong for Senator Graham to apparently contemplate illegal behavior, but his suggestion undermines the integrity of our elections and the faith of the American people in our democracy. Under the guise of rooting out election fraud, it looks like Graham is suggesting committing it. That is unacceptable, and Senator Graham should step down from his chairmanship immediately.”

Given the powerful position Graham holds in the Senate, the condemnation was widespread both from Democratic lawmakers and outside legal experts.

Lindsey Graham should be expelled from the Senate for trying to subvert free & fair elections https://t.co/eNbqXwReBz

While Graham himself responded to the news of Rassenberger’s interview by denying he called for the invalidation of legal ballots—saying he was “surprised to hear him characterize it that way”—Kristen Clarke, president and CEO of the Lawyers’ Committee for Civil Rights Under Law, appeared on MSNBC late Monday night and said that the “deeply troubling” accusation cannot be ignored. Clarke said the allegations do warrant further investigation by the Senate Ethics Committee as well as by the Department of Justice.

“It is deeply troubling,” Kristen Clarke says of Washington Post report alleging Sen. Lindsey Graham suggested Georgia Sec. of State Brad Raffensperger “find ways” to throw out legal ballots. “Here is something that the Justice Department should indeed open an inquiry into.” pic.twitter.com/m9XPEZT5PY

In a message directed at U.S. Attorney General William Barr—himself accused of spurious behavior by backing Trump’s efforts to cast doubt on the integrity of the elections by authorizing investigations into unsubstantiated claims of voter fraud—Clarke tweeted: “Still searching for evidence of attempts to interfere with election? Appears that Senator Lindsey Graham should be investigated immediately.”

Recognize What This Is: A Final Attempt of a Desperate, Bitter Man to Cling to Power
More in:
U.S.
,
Election 2020, Lindsey Graham, Republican Party, Voting Rights, US Senate