“Republicans are threatening to blow up an agreement to provide basic relief to Americans now if they can’t cripple the ability of Biden administration and the Fed to offer more help next year.” 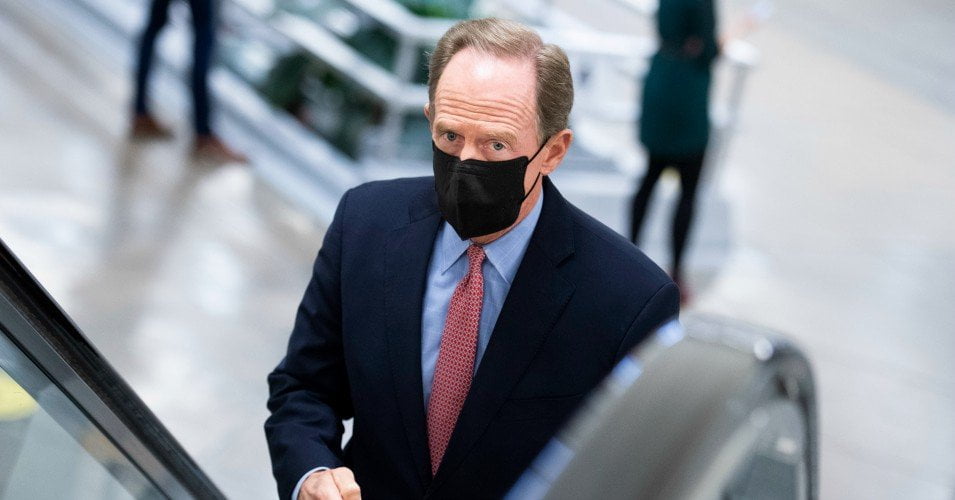 Sen. Pat Toomey (R-Pa.) is seen in the basement of the Capitol before a Senate vote on Tuesday, September 22, 2020. (Photo: Tom Williams/CQ-Roll Call, Inc via Getty Images)

With congressional negotiators on the brink of finalizing a $900 billion coronavirus relief package, Senate Republicans are pushing at the last minute to include language that would end emergency lending programs for small and medium-sized businesses as well as state and local governments, a move seen as an attempt to hamstring the incoming Biden administration’s ability to respond to the economic crisis.

Pushed by Sen. Pat Toomey (R-Pa.), the language would terminate the Federal Reserve and Treasury Department lending programs authorized under the CARES Act. As Bloomberg reported Thursday, “The issue is holding up the relief talks and the timeline for stimulus to reach millions of jobless Americans, because it puts Republicans at odds with Democrats who want to keep the programs running.”

“Democrats have disagreed with [Toomey’s] stance and said their reading of the law says the facilities can remain active until 2026,” Bloomberg noted. “They have said Treasury Secretary Steven Mnuchin’s moves to end the program are designed to tie the hands of Janet Yellen, the choice of President-elect Joe Biden to lead the Treasury.”

“The GOP is drawing a line in the sand over policy that would sabotage the economy and tie the Biden admin’s hands.”
—Lisa Gilbert, Public Citizen

Bharat Ramamurti, a member of the Congressional Oversight Commission, the panel tasked with overseeing CARES Act funds, said in response to Toomey’s effort that “Senate Republicans are threatening to blow up an agreement to provide basic relief to Americans now if they can’t cripple the ability of Biden administration and the Fed to offer more help next year.”

“In their quest to tie the Biden administration’s hands,” Ramamurti continued, “Senate Republicans are proposing a serious limitation of the Fed’s emergency lending powers—one that would undermine the Fed’s ability to respond to a future financial crisis.”


“The GOP is drawing a line in the sand over policy that would sabotage the economy and tie the Biden admin’s hands,” Gilbert added.

Politico reported that Toomey’s language would “prevent Treasury Secretary-designate Janet Yellen from restarting the Fed lending programs for small and mid-sized businesses, as well as for state and local governments, that are set to wind down at the end of the year.”

Toomey’s provision—which he characterized as a “bright red line” that has drawn significant support from other Republicans—would “prevent any money from the Treasury’s rainy day fund, even money not set aside in March as part of the CARES Act, from being used to resume those programs after 2020,” Politico reported. “It would also prohibit any similar programs from being created in the future.”

The Republican push to ensure the incoming Biden administration will not be able to make use of CARES Act lending programs was one of several issues delaying completion of a coronavirus relief package that, as it stands, includes one-time $600 direct payments, a $300-per-week boost to unemployment benefits, funding for vaccine distribution, and other programs.

Progressive lawmakers and activists have criticized the emerging relief package as badly inadequate, raising alarm over the paltry amount of direct assistance and the possible omission of key lifelines such as an extension of paid leave benefits and a federal eviction moratorium.

“From failing to extend the evictions moratorium to trying to enshrine into law an end to the Fed’s emergency programs, the GOP are doing all they can to sabotage economic recovery in 2021,” said Alexis Goldstein, a senior policy analyst with Americans for Financial Reform. “The Covid relief bill should be about relief—not tying the Fed and Biden admin’s hands.”

In Georgia It Will Be Voter Turnout vs. GOP Voter Suppression

TokyoProgressive supports and participates in projects of like-minded people and groups directly (technical, editing, design) and not-so directly (financial or moral support). Likewise, we also welcome contributions by readers that are consistent with promoting social justice. If you have a project you would like help with, or if you would like to submit an article, link, or report on a protest activity, please contact us here.
libero risus diam libero. eget Sed quis