The ruling Liberal Democratic Party (LDP)’s constitutional revision panel discussed the introduction of an emergency clause on responses to major earthquakes and other disasters to the Constitution at a general meeting on March 7, but failed to reach a conclusion over the specifics of the new clause. 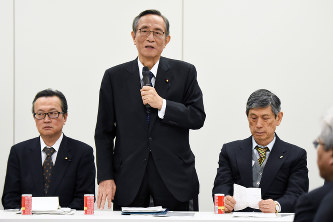 Hiroyuki Hosoda, head of the Liberal Democratic Party’s Headquarters for the Promotion of Revision to the Constitution, addresses a general meeting of the panel in Tokyo’s Chiyoda Ward on March 7, 2018. (Mainichi)

Executive members of the party’s Headquarters for the Promotion of Revision to the Constitution presented a draft clause at the meeting, which curbed the government’s restriction of people’s private rights compared to the party’s constitutional revision draft unveiled in 2012. Some other attendees, meanwhile, called for adopting the 2012 draft, which gives stronger authority to the prime minister.

With no conclusion in sight, the panel left the handling of the issue to headquarters chief Hiroyuki Hosoda, who will finalize a draft clause by a party convention slated for March 25 in line with the proposed draft to curb the restriction of private rights.

At the general meeting, a total of five proposals over the emergency clause initiative were presented: one for adopting the LDP’s draft revision of the supreme law released in 2012; one for revising the 2012 draft; one for allowing for an extension of Diet legislators’ terms and other emergency measures, such as the issuance of emergency government decrees; one for authorizing an extension of legislators’ terms; and one for summarizing the aforementioned four proposals.

Hosoda and other executives of the panel intend to build a consensus in favor of the fifth version. This stipulates that the Cabinet can institute decrees to protect people’s lives, bodies and assets in the event special circumstances arise due to major earthquakes and other disasters which would make it impossible to enact laws and pass budgets in time. The draft also grants the government the authority to make fiscal spending and limit people’s freedom of movement.

The draft also provides that special exceptions will be granted as to the legislators’ terms and election dates in the event it has become difficult to call national elections, with approval by a two-thirds majority of legislators present in each house of the Diet. The question of how long the legislators’ terms can be extended will be up for further debate.

The 2012 party draft defines a state of emergency as “armed attacks from outside, domestic turmoil or major natural disasters.” Under the draft, the Cabinet is authorized to institute decrees that have an effect equivalent to laws if the prime minister declares a state of emergency, and all citizens must obey instructions given by the central government and other public bodies. However, the draft has come under fire from other political parties and constitutional scholars for possibly leading to restrictions of basic human rights.

At the March 7 meeting, Hosoda said, “It is desirable to formulate a draft that can gain understanding from the public and a consensus from other parties.”