Published on
Sunday, December 13, 2020
by
The Progressive

Let Everybody Vote, Even If They're Incarcerated

What value is a democracy that actively seeks to silence the voices of its most vulnerable citizens? 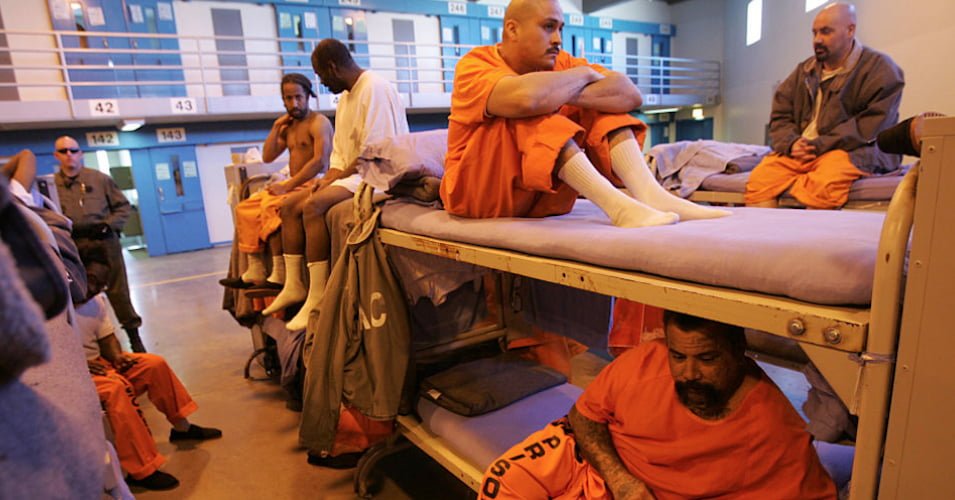 “Sadly, only the states of Maine and Vermont currently permit incarcerated people to vote. The remaining states prohibit voting under varying criteria, ranging from an absolute ban for life to bans only while incarcerated.” (Photo: Spencer Weiner/Getty Images)

In Sing Sing, one of New York state’s oldest prisons and currently home to more than 1,000 men (myself included), the presidential election was an exciting time.

Of what value is a democracy that actively seeks to silence the voices of its most vulnerable citizens?

Throughout Election Day, many of us could be heard passionately contemplating the chances of our preferred candidate. Most looked forward to seeing 45—a.k.a. Trump—lose in spectacular fashion while his few supporters voiced optimism. Several men could be heard over the phone imploring family members to vote or asking officers and staff members who they intended to vote for.

By 6 p.m., the large gallery television was tuned to CNN, where Wolf Blitzer and John King presented vote counts on the “Magic Wall.” As the hours went on, so too did the comments:

“I feel like I’m waiting for a parole decision.”

After we returned to our cells for the night, we watched on our personal TVs, and called out the results. One of my neighbors yelled “I feel so nervous!”

It reminded me of another event I watched on TV from a cell just months earlier: the funeral service for Congressman John Lewis in Atlanta. I could not help but feel the call to action, the call to vote. What could be a more fitting tribute to a man who nearly lost his life protesting for the right of Black people to vote than exercising that very right—especially when the loudest voice from the world’s most powerful office shouts for us to be silent?

Unfortunately, as an incarcerated person, I am acutely aware of my own marginalized status. I represent a segment of the population that has actively been denied the right to exercise the franchise. As the civil rights icon was honored, I thought about the nearly six million people who continue to be disenfranchised, including the formerly incarcerated.

Indeed, at the founding of this country, voting was largely the province of wealthy white landowners. In 1821, Massachusetts alone allowed universal male suffrage. It would not be until 1870, when the 15th Amendment to the Constitution was ratified, that restrictions to voting on the basis of “race, color, or previous condition of servitude” were prohibited.

That was quickly followed by backlash—part of the pattern of advancement and retrenchment that continues to characterize the political and social landscape of America. After the 15th Amendment, the Black electorate was confronted with poll taxes, absurd literacy tests, and outright domestic terrorism, all designed to suppress their votes.

In 1965, the Voting Rights Act was enacted, thanks in no small part to John Lewis, to contend with this suppression. It worked as intended until the U.S. Supreme Court’s 2013 Shelby County v. Holder decision curtailed oversight of states known to actively produce roadblocks to voting, especially for Black people.

Sadly, only the states of Maine and Vermont currently permit incarcerated people to vote. The remaining states prohibit voting under varying criteria, ranging from an absolute ban for life to bans only while incarcerated.

What is needed, once and for all, is a constitutional amendment positively asserting without exception the right of all citizens to vote, including those incarcerated and formerly incarcerated.

According to the Sentencing Project, one in thirteen Black adults cannot vote due to a felony conviction. And while Black people represent only 14 percent of the population, they account for one-third of all disenfranchised persons. And the Prison Policy Initiative report “Eligible but Excluded” found that hundreds of thousands of people detained pre-conviction nationally have been improperly excluded from voting.

The consequences of such widespread suppression are huge. In 2000, President George W. Bush won Florida and the presidency by only 537 votes, after more than a thousand Black voters were wrongly purged from the voter rolls under the false pretext of having felony convictions.

In 2004, as historian Ibram X. Kendi recounts in How to Be an Antiracist, Bush again benefitted from the repression of the Black electorate. In the crucial state of Ohio, county board officials “were falsely telling former prisoners they could not vote.” Various voter suppression tactics in the state led to the potential loss of over 174,000 votes, well above Bush’s 118,000 margin of victory.

Of what value is a democracy that actively seeks to silence the voices of its most vulnerable citizens? Even given the bipartisan clamor for criminal justice system reform, the disregard toward incarcerated voices serves to preserve the most egregious inequities of the legal system. It is conveniently forgotten that those who are closest to the problem are closest to the solution.

As an incarcerated person, I continue to have an uncomfortable front row seat to the macabre and grotesque picture that is our criminal legal system. The arbitrary use of power rooted in division and producing disparities in arrest rates, convictions, and sentencing is ever present. The reduction of human beings to state-issued uniforms and identification numbers or cell locations is normal operating procedure.

Together, these dehumanizing constants pave the way for the extremes of solitary confinement and violence at the hands of those charged with the “care, custody, and control” of incarcerated people.

Indeed, the silencing of incarcerated voices by suspending their voting rights reflects the deeper dysfunction of exclusionary politics. It suggests that some people are not qualified to speak to their own issues, to point out inequity and how it affects them, or even to provide solutions that serve not just themselves but to society as a whole. It is emblematic of the divide, largely along racial lines, between who is properly designated a citizen and who is not.

It is under this divide that citizenship and its attendant rights can be selectively subverted. And yet no one would suggest revoking citizenship itself on the basis of a felony conviction as a matter of course. Under what constitutionally ambiguous rationale, then, do states restrict the voting rights of incarcerated and formerly incarcerated people?

It was in the fall of 2016, just prior to that year’s election, that I discovered the answer to this question.

At the time, as a member of the Bard Prison Initiative‘s famous debate team, I was preparing for an upcoming debate against Brown University. We had to argue affirmatively that the President of the United States should be elected by the Electoral College.

Mired in the Constitution, constitutional law analysis, the Federalist papers, and books by scholars from across the political spectrum in preparation for the debate, our team realized a terrible truth—there is no positively articulated constitutional right to vote.

As such the authority of the states is definitive, although the question of when states may restrict voting rights is complicated. The 14th Amendment prevents states from denying “any person within its jurisdiction the equal protection of the laws.”

Without the federally guaranteed right to vote, how can any person articulate that they are not being equally protected?

At the home-going service for John Lewis, former President Barack Obama suggested in his address that in the face of recent retrenchment efforts, more needs to be done:

“You want to honor John? Let’s honor him by revitalizing the law that he was willing to die for. …Once we pass the John Lewis Voting Rights Act, we should keep marching to make it even better. By making sure every American is automatically registered to vote, including [formerly incarcerated people] who have earned their second chance.”

I would suggest that honoring John Lewis and everyone else who has fought, and continues to fight, to preserve our voting rights means eliminating constitutional loopholes. What is needed, once and for all, is a constitutional amendment positively asserting without exception the right of all citizens to vote, including those incarcerated and formerly incarcerated.

This amendment would not only give the federal government the authority to intervene in unscrupulous disenfranchisement schemes, but also signal to those of us who already felt excluded long before our convictions that our voices matter. Moreover, such an amendment would lay the legal and moral groundwork for challenging gerrymandering and replacing, for the purpose of assigning Electoral College votes, winner-take-all vote counting with proportional vote counting in every state.

Voting is important and necessary to everyone if we are going to, as Lewis put it, “redeem the soul of our nation.” Restoring voting rights to all citizens, regardless of their current incarceration or previous incarceration, represents one opportunity for substantial change.

Patrick Stephens is a prison abolitionist, restorative justice advocate, and member of Empowerment Avenue’s Writers Cohort. While currently serving a 25-years- to-life sentence, he helps others in prison through HIV/AIDS education, pre-college and college tutoring, anti-bullying, debate, chess and public speaking programs. For more of his writing, see DoingSorry.com.

The United States Is Not a Democracy. Stop Telling Students That It Is.