Let Trump Off the Hook in the Name of Elusive Unity? Some Critics Say That Could Be a Big Mistake

One observer stressed that the Justice Department must “keep its options open, and not prematurely foreclose on the possibility of criminal investigations.” 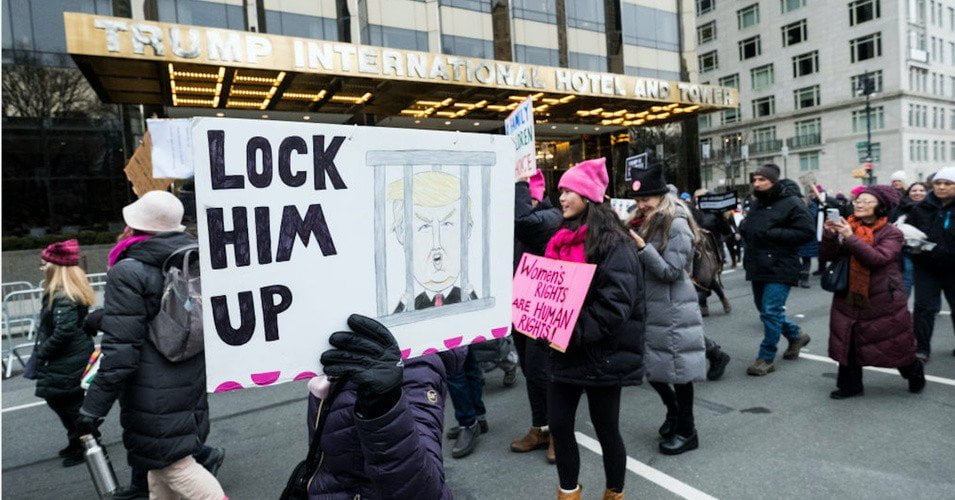 A marcher holds a sight that says “Lock Him Up!”with a picture of President Donald John Trump behind bars during the Women’s March in New York City on January 18, 2020. (Photo: Ira L. Black/Corbis/Getty Images)

While President-elect Joe Biden has reportedly signaled he will not investigate or prosecute President Donald Trump or senior members of his administration after they leave office in the spirit of uniting a deeply riven nation, some observers say that dismissing the possibility of holding the impeached president accountable for his alleged crimes would be a mistake.

In a nation that doesn’t punish—and often lionizes—its leaders who perpetrate or support genocide, nuclear war, mass murder, torture, and other crimes against humanity, Democrats calling for probes and prosecution of Trump have given what are arguably his worst offenses a pass. Democratic presidents, after all, also wage wars that kill thousands of civilians, support murderous regimes, and ignore refugee rights.

“In the end, the dilemma over what to do about Donald Trump may be less about Trump than it is about the structural problems his presidency exposed.”
—Jonathan Mahler, New York Times Magazine

Absent any prospect of punishment for policies and actions critics call war crimes and crimes against humanity, those hoping to see Trump face some sort of justice must settle for more mundane misdeeds. The most realistic prospects—those openly discussed in the halls of power and the corporate mainstream media—would likely involve Trump’s alleged bribery, obstruction of justice, conspiracy to defraud the United States, campaign finance violations, Census improprieties, and Hatch Act violations.

There are those in Congress who have vociferously called for prosecuting Trump once he leaves office. Perhaps the loudest voice of this crowd is Rep. Bill Pascrell (D-N.J.), who earlier this week fired this broadside at the soon-to-be ex-president:

[Trump] has endangered our national security. He ripped families apart. He poisoned the Census. He has personally profited from his office. He has attacked our elections and sought to throttle democracy. He was rightly impeached by the House of Representatives. He has engaged in treachery [and] in treason. He has all but given up on governing and protecting our nation and if he had a shred of dignity he would resign today.

Pascrell added that “in 2021 the entire Trump administration must be fully investigated by the Department of Justice and any other relevant offices.”

“Trump along with his worst enablers must be tried for their crimes against our nation and Constitution,” Pascrell asserted. “Importantly, any further abuse of the sacred pardon power to shield criminals would itself be obstruction of justice, and any self-pardons would be illegal.”

NEW: Biden’s thorniest challenge may not be the pandemic or the economy, but what to do about his predecessor. Can America restore the rule of law without prosecuting Trump? https://t.co/GimSyb3QbY

However, it is highly unlikely that a Biden Justice Department would try, or even investigate, Trump or any senior members of his administration, according to unnamed sources close to the president-elect. This is in keeping with U.S. history over the past half-century, including former President Gerald Ford’s 1974 pardon of his predecessor, the Watergate criminal Richard Nixon, former President George H.W. Bush pardoning Iran-Contra criminals and giving his ex-boss former President Ronald Reagan a pass, and former President Barack Obama’s refusal to prosecute the Bush-era architects and perpetrators of CIA and U.S. military torture.

It is also, according to the sources, very much in line with both of those former presidents’ stated desire to move on from dark chapters—what Ford called “our long national nightmare” in the case of Watergate—in the nation’s history and move forward in unity.

But out-of-hand dismissal of the pursuit of justice for Trump’s alleged crimed—or leaving the matter up to state-level actors—would be a serious mistake, say some observers.

1. A big question for Biden’s DoJ and also state prosecutors is whether to go after Trump or not for his manifold crimes. Biden seems war, as Obama was with Bush, but that could only be a desire to keep arms length from legal decision.

3. The case for prosecuting is Trump has done a lot of crimes! And allowing him to get away with it will only lead to more future corruption. https://t.co/xCEkmEjSC8

Jeet Heer argues in The Nation that while prosecuting Trump “will do nothing to fight the popularity of Trump and Trumpism” and would be “likely to bind him closer to his followers” who will see him as a martyr, “not prosecuting Trump will also come with a cost.” He explains:

The United States is a nation of elite impunity, as the history of recent decades demonstrates. Nixon had to resign for Watergate, but he also received an expansive pardon from his successor, Gerald Ford, which covered all crimes Nixon might have committed as president, even those yet undiscovered. It’s hard to interpret this pardon as affirming anything other than the idea that an American president can never face legal liability, no matter what.

And while Ankush Khardori of the New York Review of Books acknowledges that “the political implications of criminally investigating the Trump administration are no small matter, and the potential costs of doing so are real,” he stresses that “it is vital for the [Justice] Department to keep its options open, and not prematurely foreclose on the possibility of criminal investigations.”

“At a bare minimum, the incoming attorney general should provide the public with an intelligible approach to how the Justice Department will consider these issues, something that could be laid out as broad principles defined during a confirmation hearing,” he argues. “That is all the more important given the very real possibility that we will discover more misconduct—possibly, far more serious misconduct than we know—after Trump’s administration leaves office and his grip on government finally comes loose.”

In pondering whether the nation can restore the rule of law without prosecuting Trump, Jonathan Mahler writes in the New York Times Magazine that the game trumps the name.

“In the end, the dilemma over what to do about Donald Trump may be less about Trump than it is about the structural problems his presidency exposed,” he says. “Trump may have turned the executive branch into an instrument for his personal gain and deliverance, but it was the country’s legal and political systems that enabled him to do it. And even out of office, he may still face no consequences.”