The incoming congresswoman attacked Omar for sparring with GOP Sen. Kelly Loeffler, who faces a runoff election in Georgia this January. 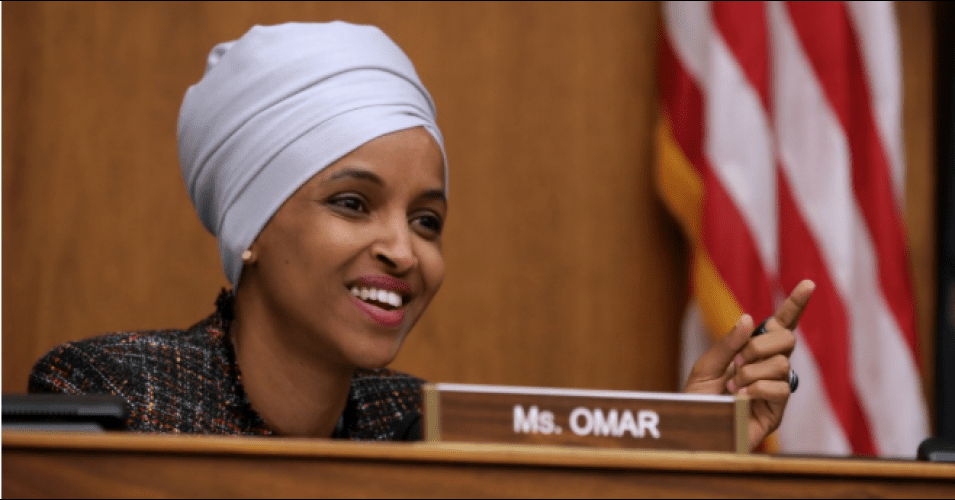 Democratic Rep. Ilhan Omar on Friday welcomed to Congress Marjorie Taylor Greene—a Republican businesswoman who supports the far-right conspiracy theory QAnon, has a history of racist comments, and won a House seat in Georgia earlier this month—by offering some advice.

Greene had jumped into a Twitter exchange between Omar—who just won reelection in Minnesota—and Sen. Kelly Loeffler (R-Ga.) after Omar defended Rev. Raphael Warnock, Loeffler’s Democratic challenger in one of two January runoff elections in Georgia that will determine which party controls the Senate.

In response to Greene dragging up the unfounded Internet rumor that Omar married her brother, the congresswoman said, “Looks like the crazy lady has logged on.”

“I know things might be different where you come from,” Omar added to Taylor, “but you have to get off the looney train now that you are in Congress.”

I know things might be different where you come from, but you have to get off the looney train now that you are in Congress. https://t.co/yfURE3fTX9

This is not the first time Greene has gone after Omar and other members of the Squad; in September, Greene raised eyebrows after she posted an image on social media of her holding an AR-15 with text that said “Squad’s Worst Nightmare.”

Greene’s attack on Omar Friday came in response to Omar’s offer to help Loeffler with writing a “real clap back,” after the senator called the congresswoman “an unabashed anti-Semite” and said she “should be expelled from Congress.”

Sorry Kelly, if you need help writing real clap back, I am here to help.

This ain’t it, try harder. https://t.co/a4ooVrMMWk

In a previous tweet, Loeffler had said it’s “no wonder” that the Squad supports Warnock, because “he totally supports their dangerous and extreme agenda.” Loeffler also highlighted Omar’s defense of Warnock earlier this week for saying that “nobody can serve God and the military.”

Citing scripture that aligns with Warnock’s comments, Omar slammed those who were criticizing him. As she put it: “The lies and smears of the GOP have no boundaries, but this is a disgrace and shameful.”

Pro tip: to win an election you run on ideas, debate your actual opponent and defend your record, not run against the Squad.

Omar, in her initial response to Loeffler, warned the senator to “not run against the Squad,” which collectively refers to Omar and three other progressive women of color who were elected to Congress in 2018: Reps. Alexandria Ocasio-Cortez (D-N.Y.), Ayanna Pressley (D-Mass.), and Rashida Tlaib (D-Mich).

“Ask Trump,” Omar instructed Loeffler, “he f#%d around and found out.”

Omar—who has wasted no time urging President-elect Joe Biden to pursue a progressive agenda in office—and Tlaib were credited earlier this month for helping the Democrat win the key battleground states they represent, Minnesota and Michigan.

In addition to Biden defeating Trump, the Squad also gained new members this cycle, with the victories of progressive Representatives-elect Jamaal Bowman and Mondaire Jones, both of New York, Cori Bush of Missouri, and Marie Newman of Illinois.

“Those who have lost faith in our political system are gaining faith because of candidates like me. They see people who look like them, who sound like them, to speak about the issues they care about.” —@JamaalBowmanNY https://t.co/lUsq2ZBpQv

Anticipating their wins in a piece for In These Times last month, Natalie Shure noted that “months into a pandemic, nationwide uprisings for racial justice, and crises in evictions and unemployment, the expanding Squad is taking power at a tumultuous moment—one that demands unabashed progressive politics more than ever.”

Although Biden beat Trump—even if the president still won’t concede—and the Democrats kept their majority in the House, control of the Senate won’t be decided until January 5, when Loeffler will face Warnock and Sen. David Perdue (R-Ga.) will face Democratic challenger Jon Ossoff.

Detailing the Republican incumbents’ records in a column this week, former Labor Secretary Robert Reich wrote that “Perdue and Loeffler represent one of the worst tenets of today’s GOP: governing for personal gain while ignoring the needs of their constituents.”

“Georgians deserve better,” Reich added. “They deserve senators who will fight for them in Washington—they deserve the leadership of Raphael Warnock and Jon Ossoff.”

Joe Biden Owes His Victory to the Left, No Matter What the Democratic Party Says