“Mitch McConnell is rushing to steal a Supreme Court seat before the election. Senate Republicans would rather help him do it than help millions of Americans.” 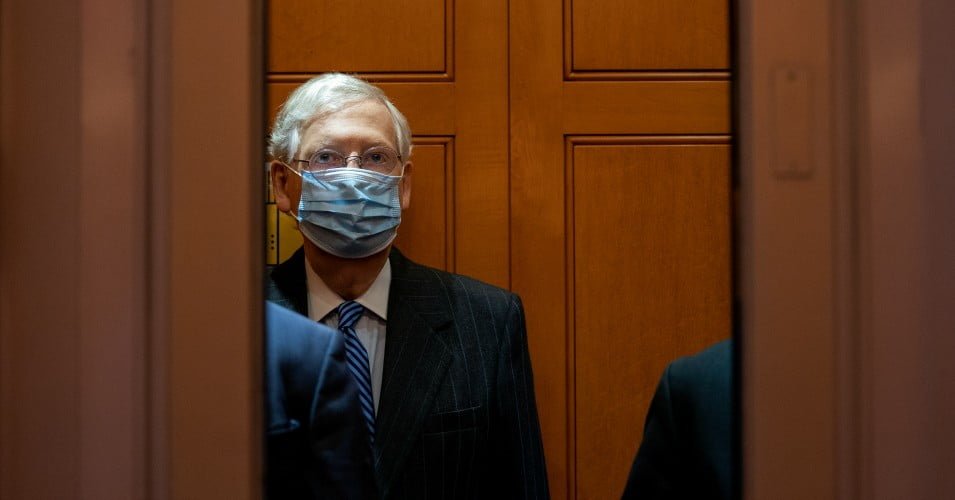 Senate Majority Mitch McConnell told his Republican colleagues Tuesday that he has privately been urging the Trump White House not to strike a coronavirus relief deal with House Speaker Nancy Pelosi before the November 3 election, warning that an agreement could interfere with his chamber’s plan to confirm Amy Coney Barrett to the Supreme Court early next week.

McConnell’s remarks, first reported by the Washington Post, came during a closed-door Senate GOP lunch just ahead of a Tuesday evening deadline for a relief deal set by Pelosi and agreed to by the Trump administration. While the deadline came and went without a deal, the House Speaker told Democratic lawmakers late Tuesday that the two sides “have been making some progress” and continued to voice optimism that “we can reach an agreement before the election.”

“Let’s be very clear about this: Mitch McConnell and Republicans are continuing to block essential relief to Americans across our country.”
—Rep. Pramila Jayapal

But with the election less than two weeks away, the window to hash out the details of the legislative package—which currently includes a desperately needed boost in unemployment benefits, another round of stimulus checks, and aid to state and local governments—and push it through both chambers of Congress is shrinking rapidly. Pelosi acknowledged that reality on Tuesday, telling reporters that legislation would have to be written by the end of this week for it to have any chance of reaching President Donald Trump’s desk before Election Day.

Even if the White House and Pelosi come to an agreement, it remains unclear whether enough GOP senators would be willing to vote for a big spending package, despite the catastrophic economic consequences of blocking additional relief. Assuming a united Democratic caucus, any legislation would need at least 13 Republican votes to clear the Senate.

While McConnell’s stated excuse for standing in the way of relief is his commitment to confirming Barrett as quickly as possible, that justification may be intended to obscure the fact that many Senate Republicans are simply opposed to additional coronavirus aid, whether or not the package would disrupt the right-wing judge’s path to the Supreme Court. Others have warned in recent days that in preparation for a potential Trump loss next month, McConnell is laying the groundwork to force crippling austerity under a Biden administration.

“Let’s be very clear about this: Mitch McConnell and Republicans are continuing to block essential relief to Americans across our country,” said Rep. Pramila Jayapal (D-Wash.), co-chair of the Congressional Progressive Caucus. “If Trump wants to ‘go big or go home,’ he better see if he can control his own party.”

Mitch McConnell is rushing to steal a Supreme Court seat before the election. Senate Republicans would rather help him do it than help millions of Americans.

The wrangling on Capitol Hill comes amid a backdrop of deepening misery for tens of millions of Americans as the coronavirus continues to spread and the economic collapse brought on by the pandemic—as well as lawmakers’ refusal to take sufficient action in response—shows no sign of letting up, with layoffs at their highest level since August and hunger still on the rise.

According to data from the Census Bureau, 22 million U.S. adults reported that their household struggled to afford enough food last month.

“Whatever savings low-income people managed to build up with CARES Act relief will be gone well before any other help arrives, and another pandemic surge deeply complicates matters,” David Dayen of The American Prospect warned Tuesday. “Many of the few still-extant relief supports expire at the end of the year… It’s disgusting to now have a man-made depression on top of the pandemic-made one.”

With a comprehensive relief package in doubt in large part due to his own obstruction, McConnell on Tuesday held a procedural vote on a plan to extend an additional $260 billion to the Paycheck Protection Program.

Sen. Majority Leader Mitch McConnell says his COVID relief bill does not include another round of stimulus checks for Americans. pic.twitter.com/Bt4YHdCuOn

Dismissing the vote as a political stunt, most Senate Democrats voted to block the legislation.

Kyle Herrig, president of watchdog group Accountable.US, said in a statement that “the American people need help and need it now.”

“Only voting to extend a program that failed the very people it was intended to help without fixing any of the flaws that allowed it to fail is completely nonsensical,” Herrig added.