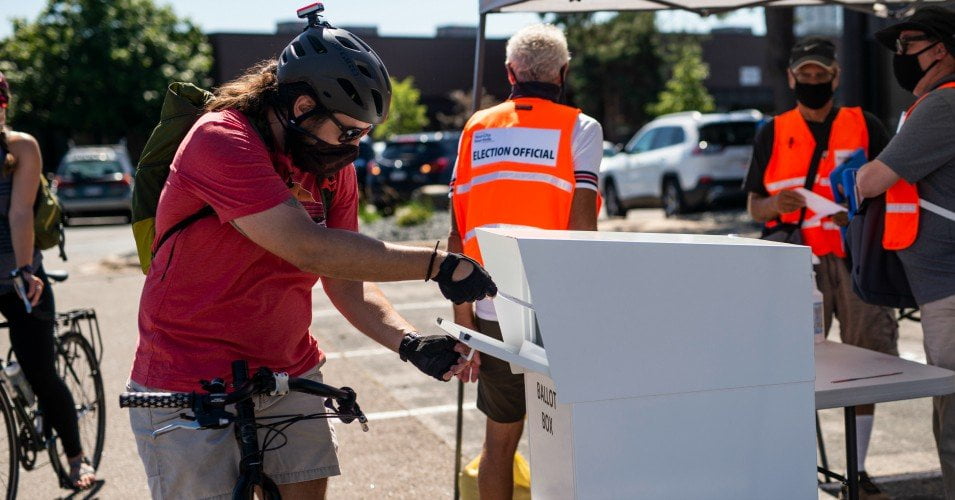 A voter on bicycle drops off their ballot at a drive through drop-off for absentee ballots on August 11, 2020 in Minneapolis, Minnesota. (Photo: Stephen Maturen/Getty Images)

Minnesota lawmakers and election officials urged voters in their state to avoid the mail and drop off their absentee ballots in person if possible after a panel of federal judges on Thursday issued a last-minute ruling ordering the separation of absentee ballots that arrive after 8:00 pm on November 3 from those received earlier, leaving open the possibility that late-arriving ballots could be invalidated.

“DROP OFF YOUR BALLOT IF YOU HAVEN’T MAILED IT YET,” Rep. Ilhan Omar (D-Minn.) tweeted late Thursday, linking to a website designed to help voters find nearby ballot drop-off locations.

In its 2-1 decision just days out from the election, the U.S. Court of Appeals for the Eighth Circuit said Minnesota Secretary of State Steve Simon’s mandate that ballots postmarked by November 3 and received within seven days of Election Day must be counted stands “in direct contradiction to Minnesota election law governing presidential elections.”

“This last-minute change could disenfranchise Minnesotans who were relying on settled rules for the 2020 election—rules that were in place before the August 11 primary and were accepted by all political parties.”
—Steve Simon, Minnesota Secretary of State

Simon, a Democrat, said state officials are considering appealing the ruling to the conservative-dominated Supreme Court and implored Minnesota voters to drop their ballots off in person at their local county election office instead of mailing them.

While ruling in favor of the pair of Trump Electoral College electors who brought the case, the appellate judges acknowledged their decision would likely cause “voter confusion” and “election administration issues” and potentially further undermine “public confidence in the election.”

“With that said,” the judges added, “we conclude the challenges that will stem from this ruling are preferable to a postelection scenario where mail-in votes, received after the statutory deadline, are either intermingled with ballots received on time or invalidated without prior warning.”

In her lone dissent, Judge Jane Kelly warned that the court’s decision “has the effect of telling voters—who, until now, had been under the impression that they had until November 3 to mail their ballots—that they should have mailed their ballots yesterday (or, more accurately, several days ago).”

“With the court’s injunction in place,” Kelly wrote, “fewer eligible Minnesotans will be able to exercise their fundamental right to vote. That, in and of itself, should give us significant pause before granting injunctive relief.”

As Reuters explained, “the 8th Circuit sent the case back to a lower court and instructed it to require Minnesota election officials to identify and ‘segregate’ absentee ballots received after November 3. The litigation is in a preliminarily stage and those ballots would not be counted if a final judgment is entered in the Republicans’ favor.”

Following the court’s ruling, Sen. Amy Klobuchar (D-Minn.) said voters should “NOT put ballots in the mail any more” and instead drop them off in person to ensure they’re received on time.

BREAKING: Because of LAST MINUTE ruling, Minnesota DO NOT put ballots in mail any more.
In the middle of a pandemic, the Republican Party is doing everything to make it hard for you to vote. Stand up for YOUR rights:

In a statement late Thursday, Simon denounced the court’s dismissal of his deadline extension as “a tremendous and unnecessary disruption to Minnesota’s election, just days before Election Day.”

“This last-minute change could disenfranchise Minnesotans who were relying on settled rules for the 2020 election—rules that were in place before the August 11 primary and were accepted by all political parties,” Simon added. “I won’t let any Minnesota voter be silenced. My mission is now to make sure all voters know that a federal court has suddenly changed the rules, and that their ballot needs to be received by Election Day.”

The secretary of state’s office provided a list of steps voters should take to ensure their ballots are counted:

“The right to vote is fundamental,” said Simon. “The court’s decision is a step in the direction of restricting the exercise of that right, during a pandemic that has altered everything about our daily lives. But Minnesotans always find a way to vote, and they’ll do so again this year. The spirit that has fueled Minnesota’s nation-leading voter turnout will continue.”

'Just Rich People vs Everyone Else at This Point': Bloomberg Backer Judge Judy—Worth $440 Million—Tells Sanders Supporters to 'Grow Up'