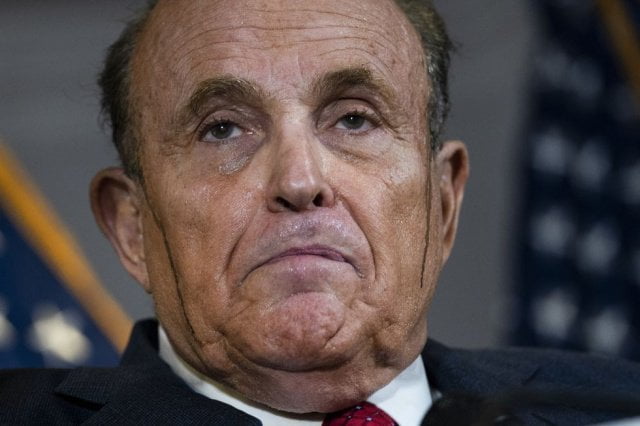 Ooof. The bonkers clown show keeps spiralling further out there. On a day when Georgia finished a hand recount showing Biden still wins the state, and a Trump-appointed judge denied a motion to invalidate that result in a case that had “no basis either in fact or law” – marking Trump’s 32nd legal defeat – and news dropped of Trump summoning Michigan GOP lawmakers to the White House to see if they can help overturn that state’s result, Rudy Giuiliani upped the day’s crazy quotient with another train wreck of a news conference that might beat the Four Seasons fiasco, laying out a string of fact-and-evidence-free claims that Joe Biden, in “a common scheme,” rigged the election through “mass cheating” in an ingeniously coordinated conspiracy with city officials nationwide. Spinning out chimerical fantasies already tossed out in multiple court losses, Giuliani stood by a map proclaiming “Multiple Pathways To Victory” to charge officials in Atlanta, Detroit, Madison, Milwaukee, Philadelphia et al with conspiring in Biden’s massive win, and called for it to be overturned.

As he spoke and, in Charlie Pierce’s words, “the gods of absurdity overachieved” – “Madness always attends a time of plague” – hair dye streamed down both sides of Giuliani’s sweaty face. Always a trooper for Trump, he persevered, albeit with frequent swipes of a clammy handkerchief; he also took periodic detours to issue some anti-Semitic dog-whistles about George Soros being behind the villainy. Seeking to explain away the court losses – “Unfortunately they have some friendly judges that will issue ridiculously irrational opinions” – he nudged the crazy dial up to 11, launching into a dreadful re-enactment of a scene from 1992’s My Cousin Vinny, “one of my favorite law movies,” in which Joe Pesci plays a hapless lawyer who’s never won a case:  “And then he says to her, ‘How many fingers do I got up?’ And she says three…” George Conway on the spectacle: “If my life were on the line and I had to choose between being represented by Vinny Gambini or Rudy Guiliani, I’d choose Vinny hands down.” Conway also marveled, “The degree of dishonesty, derangement and depravity displayed by (Trump’s) legal team exceeds the imaginable.” Added a helpful commenter, “And hair dye.”

Improbably, the rest of Trump’s “legal team” seemed to have landed from a planet even further distant from Mother Earth. A distraught Sidney Powell, sounding perpetually on the verge of tears, claimed the election was tainted by a “massive influence of communist money” from Cuba, China and Venezuela, thus charging Hugo Chavez rigged it all for Biden despite having died seven years earlier. Other alleged co-conspirators included voting-machine companies, Antifa, Black Lives Matter, “people around the world, in the middle of the night, that’s when the dominion operators went in and injected votes…globalists, dictators, corporations – everyone’s against us except President Trump and we the people.” “This is stunning, heartbreaking, infuriating, and the most unpatriotic acts I can even imagine for people in this country to have particpated in,” she exclaimed. “We want the American public to know we will not be intimidated. American patriots are fed up with the corruption…We are going to take this country back…We are going to clean this mess up now. President Trump won by a landslide, (and) we are going to reclaim the United States of America for the people who vote for freedom.”

There was also Jenna Ellis, a smirking, Barbie-like “lawyer” from Liberty University, who railed against the “absolutely shocking” fake news and insisted “this is an elite strike force” so they better listen up “because the American people deserve to know what we have uncovered to make sure our Constitution is protected – we are a nation of rules, not a nation of rulers.” (Say what?) When reporters asked to see evidence: “Your question is fundamentally flawed – you obviously don’t understand the legal process.” Twitter: “Your question is fundamentally flawed because Rudy is melting, we live in a different dimension, and we don’t know how to answer it.” Also Twitter: “Translation: there is no evidence, and they should all be disbarred… Seems like a longwinded way to say we don’t think black people’s votes should count…I’ve changed my mind about you defending me in my parking ticket case….Where can we hire this, checks notes, elite strike force?” Rudy, face streaming, finished up, explaining they don’t want to reveal their evidence or expose their witnesses to “the tender mercies of a vicious press.” “I don’t know what you need to wake you up, to do your job and inform the American people!” he shouted. “This is real! It’s not made up! There’s nobody here who engages in fantasies!” “I’ve tried a hundred cases – I know crimes, I can smell them,” he said, as lucid as ever. “We’re headed to a very bad place, and it’s not inappropriate that a Venezuelan company counted our votes” – or that the tawdry, bungling, felonious circus ends like this. 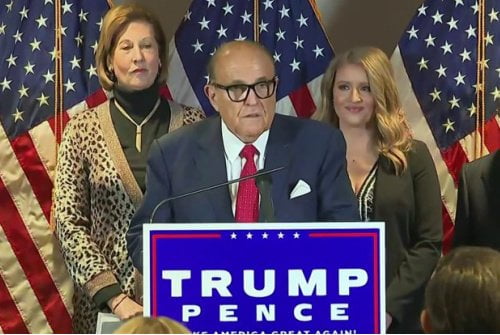 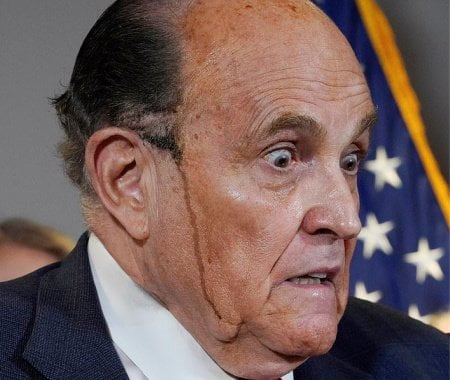