For the families of eight water protectors in Honduras, there will be no holiday season this year. They will continue to fight for the freedom of their loved ones who have each been jailed for up to two years for participating in a struggle to keep iron ore mining out of the headwaters of the rivers they depend on.

“It is the start of a new stage of struggle, a stage of unity and we are not going to stay at home,” said Juana Zúniga, the wife of one of the eight imprisoned water protectors, during a December 21 press conference, “The joy of spending Christmas with family has been taken away from us, but we will nonetheless continue fighting. We will continue struggling for the freedom of our compañeros.”

These members of the Municipal Committee in Defense of the Public Commons of Tocoa in northern Honduras were illegally jailed for defending the Carlos Escaleras National Park and the Guapinol and San Pedro rivers against the threat of a mining project owned by Honduran company Inversiones Los Pinares. In October 2019, recognizing the importance of their struggle, the Institute for Policy Studies awarded the Committee with the international Letelier-Moffitt Human Rights award.

A recent report from the International Human Rights Clinic at the University of Virginia describes how Los Pinares filed accusations against a total of 32 individuals after communities set up a peaceful encampment to protect their water from the company’s mining project, which lasted 87 days in 2018. Violence carried out at this time by security guards hired by the mine in collaboration with armed agents from the local municipality who are also linked to the company and that led to the injury of one of the protesters has never been investigated.

According to the University of Virginia, there have been numerous irregularities in the legal process against the eight detained defenders to date, including that “The Public Prosecutor has not presented convincing evidence to support such an extreme measure [of preventative detention], nor proof to justify the prolonged detention of the community leaders.” According to their lawyers, the company has falsely accused them of aggravated arson, and unlawful detention, which are not cause for preventative detention. Furthermore, the men voluntarily presented themselves to the court, evidence that they would not try to flee if freed.

But, as one of the lawyers for the eight, Efraín Rodríguez, said on Monday, “In Honduras, preventative detention has become the norm, rather than the exception.” Or, at least for people who are defending water, land, life, and democracy.

A long-awaited hearing in Tocoa

Only after Rodríguez and a group of lawyers made five requests asking the courts to review the defenders’ preventative detention measure was a hearing finally scheduled for December 18 at the Tocoa courthouse. Well aware of the cooptation of Honduras’ judicial system by powerful interests, family members of the eight, their lawyers, the Committee, and their allies were still hopeful that the men would be released on bail and be home with their families in time for the holiday season. As a result of the Covid-19 pandemic, families have not been able to visit their loved ones since early March.

At the conclusion of the hearing, the judge, Zoë Guifarro, announced she would take 24 hours to communicate her decision. In response, the families decided to camp out in front of the courthouse until her resolution was made public. The next day, they received her decision, refusing to free the men. Two days later, contrary to provisions in Honduras’ penal code that indicate an appeal should be immediately processed and a decision made within three days, she refused to admit the legal team’s appeal. She reportedly told the lawyers that the court is on vacation and unable to address their appeal until January 6. The legal team responded with a further legal action filed directly with the appeal court in La Ceiba in hopes of rectifying the judge’s decision. 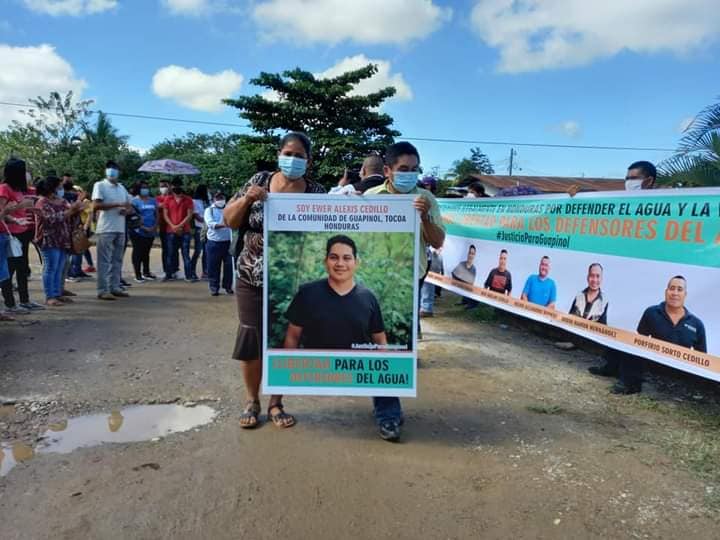 “This decision is totally illegal,” charged Edy Tábora, member of the detainees’ legal team, during the press conference. “It reaffirms the pact of impunity between the company Inversiones Los Pinares, the Public Prosecutor, and the judiciary. The men should have been freed.”

The judge’s decision also sends a powerful message to the company, Inversiones Los Pinares, commented lawyer Carlo Jiménez over Zoom: “It serves to ensure that the company can continue destroying the national park, destroying the rivers, while bringing fear and violence to the communities.”

Notably, the owners of Inversiones Los Pinares are Lenir Pérez, who has been previously accused of mining-related abuses, and Ana Facussé, daughter of the late palm oil magnate Miguel Facussé, whose economic activities have been linked with brutal violence in the same region of northern Honduras. According to an investigation undertaken by Univisión, Inversiones Los Pinares enjoyed the investment of U.S. steel company Nucor Corporation for four years until October 2019. The U.S. firm reportedly pulled out after the conflict began escalating and became more visible in the United States.

Further underscoring the injustice of the case, while the eight water protectors are denied their right to be tried in freedom, high profile figures enmeshed in corruption scandals and other serious crimes have recently been freed.

“We are not going to accept the consummation of this injustice while corrupt personalities in our country are freed when they have stolen millions of dollars from the state, been linked to organized crime, among other truly dangerous crimes. These people have been granted freedom as a result of being close supporters of the party in power,” states a public communiqué, presented during the press conference by representatives of the Convergence Against Continuism (CCC).

In December alone, several powerful figures have been allowed to defend themselves in freedom. For example, in the Pandora´s Box case, a major corruption scandal investigated by the now defunct Mission of Support  Against Corruption and Impunity in Honduras (MACCIH by its initials in Spanish), the former Secretary of Agriculture was recently released from jail and granted house arrest instead.

The investigation into this case implicated over 170 politicians, including President Juan Orlando Hernández and his wife, for their involvement in a corruption ring to channel millions of dollars from the District Development Fund and the Secretary of Agriculture and Livestock into National Party electoral campaigns in 2013. Powerful figures like Hernández were not ultimately charged. Of the 38 ultimately accused, the majority had their charges overturned and were allowed to defend themselves in freedom. Only three continue to face prosecution. Other powerful figures, including a former mayor of Tegucigalpa, Miguel Pastor, accused of bribery, fraud, and collaboration in money laundering in a separate case, was also freed on bail this month.

Much of what is happening today reflects the dictatorship of the National Party and Juan Orlando Hernández that has emerged since the 2009 military-backed coup against President Mel Zelaya, which received strong support from the U.S. government under the administration of President Barack Obama and the Canadian government under Prime Minister Stephen Harper. Since then, despite recent investigations linking President Hernández to his brother’s involvement in narco-trafficking, Canadian authorities continue to remain silent on ongoing human rights abuses and the United States has nonetheless continued public, economic, and military support to Honduras.

The Municipal Committee in Defense of the Public Commons of Tocoa and family members of the eight closed their press conference chanting the name of each of the detained water protectors, followed by a shout of “Freedom!”

International supporters are encouraging messages of solidarity to the Committee and family members of the detained during what will be a challenging holiday season.