'Nobody Should Fall For It': Sanders Condemns Trump's Reported Plan to Falsely Declare Victory on Election Night

“We will not allow that to happen. Every vote must and will be counted.” 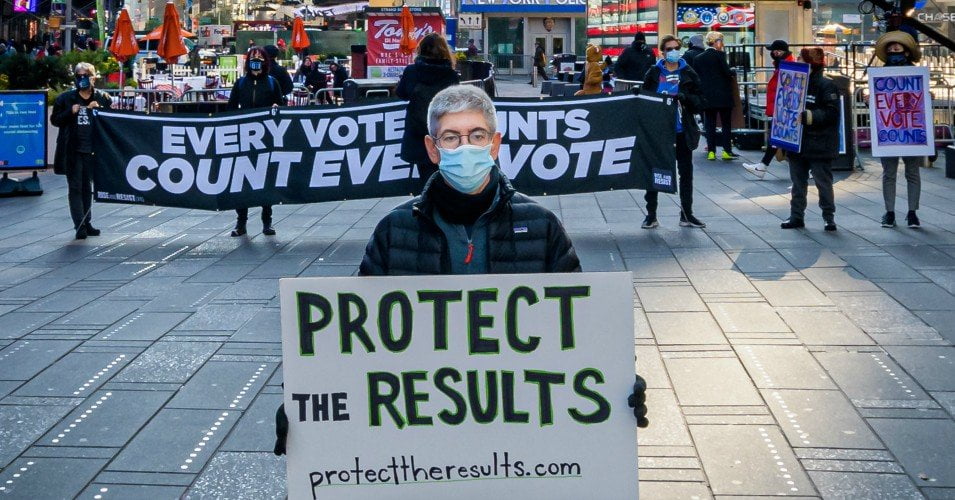 Members of the activist group Rise and Resist gather for a demonstration in Manhattan on October 31, 2020. (Photo: Erik McGregor/LightRocket via Getty Images)

In the wake of fresh reporting indicating that President Donald Trump is planning to prematurely claim victory if he has a lead Tuesday night and reject as illegitimate ballots counted after November 3, Sen. Bernie Sanders late Sunday characterized the news as “no surprise” given the president’s repeated nods toward such a ploy and urged the public to be prepared for the false declaration.

“That has been his strategy for months, and nobody should fall for it,” said the Vermont senator, who has been sounding the alarm about this potential “nightmare scenario” in interviews, speeches, and on the campaign trail. “It’s why he is demonizing mail-in ballots and sabotaging the Postal Service.”

“That has been his strategy for months, and nobody should fall for it. It’s why he is demonizing mail-in ballots and sabotaging the Postal Service.”
—Sen. Bernie Sanders

Axios reported Sunday that in the weeks leading up to Tuesday’s election, Trump “has privately talked through this scenario in some detail… describing plans to walk up to a podium on Election Night and declare he has won.”

“Trump’s team is preparing to falsely claim that mail-in ballots counted after November 3—a legitimate count expected to favor Democrats—are evidence of election fraud,” according to Axios. “Many prognosticators say that on election night, Trump will likely appear ahead in Pennsylvania—though the state’s final outcome could change substantially as mail-in ballots are counted over the following days.”

While strategizing with his advisers behind the scenes, Trump has also been publicly laying the groundwork for the Election Night plan for months with his lie-filled attacks on the legitimacy of mail-in ballots and other state efforts to expand voting access amid the coronavirus pandemic, which has killed more than 230,000 Americans on the president’s watch.

Trump’s efforts to sow doubt about the election results, as well as his refusal to commit to a peaceful transition of power, have sparked warnings that the president is emboldening the most dangerous elements of his base, increasing the likelihood of mass chaos on November 3 and the days that follow.

“As I have warned many times, Trump is very likely to declare himself the winner at a moment when a large portion Republican-leaning, in-person votes have been counted, but before a vast number of Democratic mail-in ballots are counted,” Sanders said Sunday. “Then he will continue his lies about voter fraud in an attempt to suppress enough votes to win. We will not allow that to happen. Every vote must and will be counted.”

TODAY IS THE LAST DAY to meet our $80,000 Fall Campaign goal as we battle against the authoritarianism taking place before our eyes.

Speaking to reporters Sunday evening, Trump dismissed Axios’ reporting as “false” before launching into an attack on states that plan to continue counting legally submitted ballots after Election Day—a practice that, contrary to the president’s repeated claims to the contrary, is completely normal.

President Trump: “I think it’s terrible that we can’t know the results of an election the night of the election.” pic.twitter.com/YTAlDRjNzE

As the New York Times noted Sunday, “Americans are accustomed to knowing who won on election night because news organizations project winners based on partial counts, not because the counting is actually completed that quickly.”

With Trump reportedly planning to claim victory if he pulls ahead of Democratic presidential candidate Joe Biden in early vote counts, news outlets and social media platforms are facing pressure to combat potential Election Night disinformation by the incumbent, who has repeatedly lied that the only way he can lose is if the race is “rigged” against him.

“The press has a crucial role if/when this happens: it’s not partisan to condemn this behavior,” tweeted Washington Post contributor Brian Klaas. “Nobody should equivocate about it. It’s imperative that Americans unite against this authoritarian strategy.”

As Common Dreams reported last week, a coalition of progressive advocacy groups is planning nearly 400 rallies across the nation to protest any effort by Trump to falsely claim victory or refuse to accept the election results.

“We think the likelihood of activation is high,” the coalition said.