Published on
Sunday, December 20, 2020
by
Fairness and Accuracy In Reporting (FAIR) 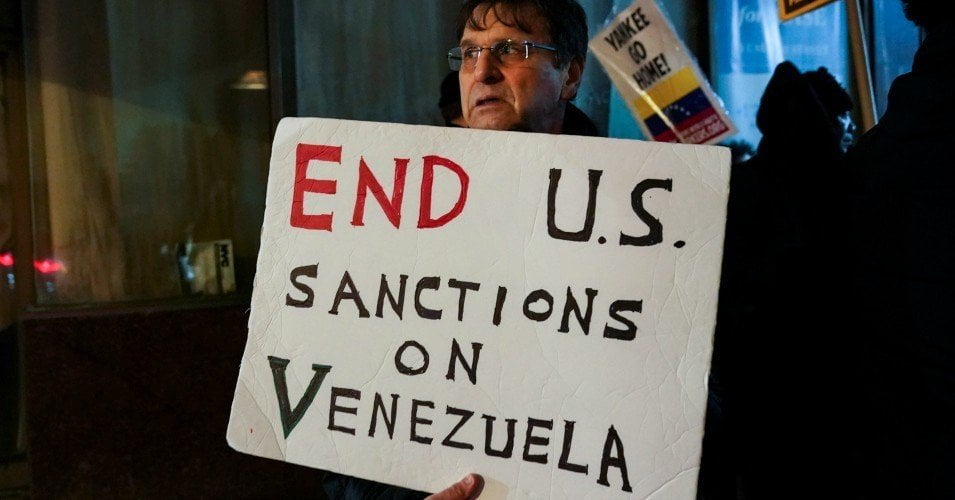 “If the Times is concerned about the health and well-being of Venezuelans, the paper should focus its reporting on the U.S. government’s campaign to crush the Venezuelan economy and shatter its political system,” writes Greene. (Photo: Drew Angerer/Getty Images)

In the runup to the election, the New York Times (5/12/20) published a piece titled “Venezuela Votes in an Election the Opposition Calls a Charade.” The piece included various descriptions of the political and economic crisis in the country.

Unfortunately, the article ignored the fact that the US government has targeted sanctions explicitly aimed at destabilizing the Maduro government and crushing the Venezuelan economy. In fact, the word “sanction” never appears in the piece.

In Trump’s first year, his administration dramatically expanded Obama era sanctions on Venezuela in a campaign to squeeze the democratically elected President Nicolás Maduro out of power. These sanctions limited Venezuela’s oil exports and prevented its access to international financial institutions. According to the White House, they were “calibrated to deny the Maduro dictatorship a critical source of financing.”

With its primary source of revenue drying up and isolated from the global financial system, the Venezuelan economy is in a tailspin. A study authored by a Venezuelan economist outlined some of the devastating effects of the sanctions. They have caused the decline of oil production to accelerate, costing the Venezuelan state up to $31 billion. The study also drew a historical correlation between oil exports and imports of critical provisions. From 2018 to 2020, imports decreased by  77%.

Because of the sanctions, the healthcare system collapsed, food imports dropped even more rapidly and people left the country by the thousands. US pressure on international humanitarian bodies prevented organizations such as the Red Cross from providing much-needed aid. One head of the Red Cross noted that it was easier to get supplies for Yemen or Syria than for Venezuela. A study from the Center for Economic and Policy Research estimates that sanctions resulted in up to 40,000 excess deaths due to worsening living conditions. During the Covid-19 crisis, the International Monetary Fund (IMF) even refused to provide financing to help develop Venezuela’s detection and response systems.

After President Maduro was inaugurated for a second term in 2019 after his 2018 re-election, the US refused to recognize the government, and tightened the sanctions. With the full support and backing of Washington, Juan Guaidó, head of the National Assembly, declared himself the country’s interim president. Guaidó was welcomed by the Global North, and even attended President Trump’s 2020 State of the Union Address. Emboldened by the overt support from the US, Maduro’s opposition stepped up efforts to destabilize the country and delegitimize the current government, fueling violent clashes, an assassination attempt against Maduro and even an abortive Bay of Pigs–style invasion.

Trump reportedly grew bored with the whole affair, but the sanctions and the suffering continue.

None of this has made Venezuela more democratic, nor has it brought the country closer to solving its political problems. Instead, the situation is far worse.

All of this critical context has been completely omitted by the New York Times in their description of the situation there. As stated above, the word “sanction” does not appear a single time.

Based on this report from the Times, all of the  “hunger, joblessness, gasoline shortages and…breakdown of the healthcare system” that “have only worsened with the coronavirus” is all to be laid exclusively at Maduro’s feet. The US role is ignored, and the paper’s mostly American readers are left completely in the dark on their own government’s actions. All of this to justify the continued US coup attempt and to lament its apparent failure.

The Times described the looming electoral victory for Maduro’s party as something that “could significantly weaken Juan Guaidó” in his “bold but ultimately failed bid backed by the US to take power.” The coup attempt is framed as a noble effort by the US that is being thwarted by elections.

The Times suggested that the failure of the US coup attempt “has heightened feelings of abandonment and political impotency.” The reader is meant to assume that Venezuelans are waiting for the US-backed Guaidó to save them from their dire situation.

The author, Andes bureau chief Julie Turkowitz, has had this problem in the past (FAIR.org, 4/16/20). Earlier this year, Turkowitz wrote a piece (4/10/20) on the collapse of the Venezuelan healthcare system. There too she downplayed the role of the US economic war, heaping most of the blame onto the Venezuelan government.  Beyond the current situation in Venezuela, the New York Times has long played a role in supporting US attempts to dominate Latin America (FAIR.org, 11/20/20).

None of this is to excuse any failings Maduro and his government have been accused of. However, nothing Maduro has done is a reason to erase the acts of economic violence that the US perpetrates on Venezuela. If the Times is concerned about the health and well-being of Venezuelans, the paper should focus its reporting on the US government’s campaign to crush the Venezuelan economy and shatter its political system.

Please remind the New York Times that as a US paper, it has an obligation to cover the effects of US government policy on countries like Venezuela.

Bryce Greene is a student at Indiana University/Bloomington.

© 2020 Fairness and Accuracy In Reporting (FAIR)