“Trump is pardoning his political allies while he’s executing people on death row at an unprecedented rate. His deeds are unconscionable.” 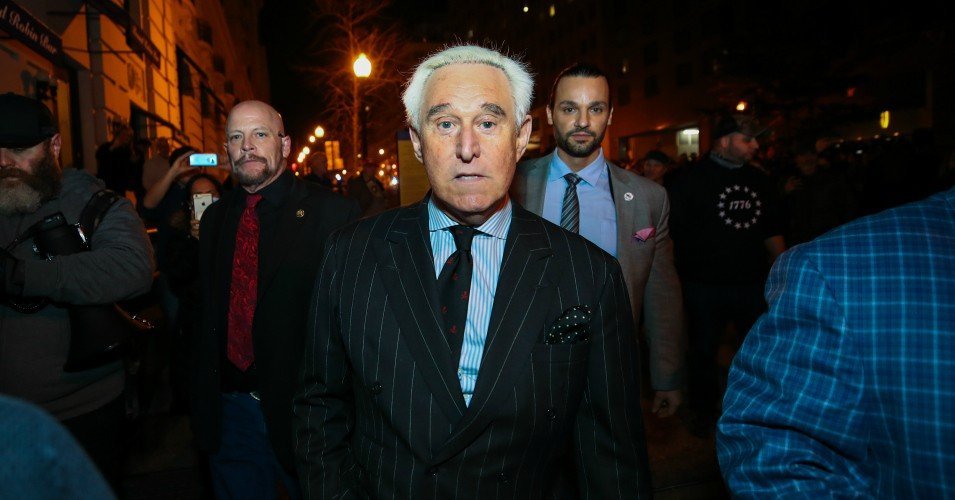 Roger Stone walks through the crowd by his hotel as Trump supporters and Proud Boys held a rally in Washington, D.C., United States on December 11, 2020. (Photo: Tayfun Coskun/Anadolu Agency via Getty Images)

Throwing the deeply unequal nature of the U.S. criminal justice system into sharp relief, President Donald Trump late Wednesday issued another wave of pardons for his wealthy political and personal allies as his administration continues its unprecedented lame-duck spree of executions—a punishment almost exclusively reserved for the poor and marginalized.

“A flow of pardons for the wealthy and corrupt, yet Brandon Bernard was left to die when his own jurors and prosecutor begged for mercy.”
—Rep. Alexandria Ocasio-Cortez

“A flow of pardons for the wealthy and corrupt, yet Brandon Bernard was left to die when his own jurors and prosecutor begged for mercy,” Rep. Alexandria Ocasio-Cortez (D-N.Y.) said late Wednesday, referring to the 40-year-old Black man the Trump Justice Department killed earlier this month for a crime he committed at the age of 18. “Our carceral system laid bare for the world to see.”

Rep.-elect Cori Bush (D-Mo.) tweeted that the combination of Trump’s wave of pardons for the well-connected and last-minute rush of executions amounts to “mercy for the rich and state-sanctioned murder for the poor.”

“Trump is pardoning his political allies while he’s executing people on death row at an unprecedented rate,” said Bush. “His deeds are unconscionable.”

According to the Pew Research Center, the outgoing president “has used his clemency power less often than any president in modern history,” and many of his “clemency recipients have had a ‘personal or political connection to the president.'”

“The only modern president who granted clemency almost as infrequently as Trump is George H.W. Bush, who granted 77 pardons and commutations in his single term,” the research outfit noted. “Trump has granted clemency to less than half of 1% of the more than 10,000 people who petitioned him for it through the end of the 2020 fiscal year (which ended Sept. 30), according to the Justice Department.”

Tomorrow marks 28 years since George H.W. Bush pardoned six defendants as part of the Iran-Contra cover up, one of whom, confessed criminal Elliott Abrams, was brought back into government by George W. Bush, and now serves as Trump’s Iran/Venezuela envoy. Corruption is the rule.

Kyle Herrig, president of watchdog group Accountable.US, said in a statement Wednesday that the president’s lame-duck pardons “are just the latest example of Trump’s longstanding pattern of promoting cronyism and corruption in his administration at all costs.”

“As millions of Americans are suffering and afraid of losing their homes and livelihoods, all Trump has time for is handing out political favors to his friends and allies,” said Herrig. “There’s little more we can expect from a president who has held ethics in low regard and ignored the struggles of everyday Americans for his entire four-year term.”

The Trump administration’s execution spree, meanwhile, appears on track to continue as the Justice Department—which resumed federal executions in July after a 17-year hiatus—aims to execute three additional people before President-elect Joe Biden, an opponent of the death penalty, takes office next month.

Attorneys representing the three federal inmates set to be executed—Corey Johnson, Dustin John Higgs, and Lisa Montgomery—have asked Trump to commute their sentences to life without parole. Johnson and Higgs have both tested positive for the coronavirus as it sweeps through the federal penitentiary in Terre Haute, Indiana.

In a letter (pdf) on Monday, a group of Democratic senators and Sen. Bernie Sanders (I-Vt.) demanded that the Justice Department inspector general investigate the Trump administration’s execution spree, which the lawmakers described as “a break with both modern history and decades-old practice.”

“The federal government had not executed a federal prisoner since 2003 and had only executed three people in the previous 50 years,” the senators wrote. “The executions that have already taken place since November 3, 2020, and those scheduled to occur in January 2021, are ‘the first executions under a lame-duck president in over 100 years.'”