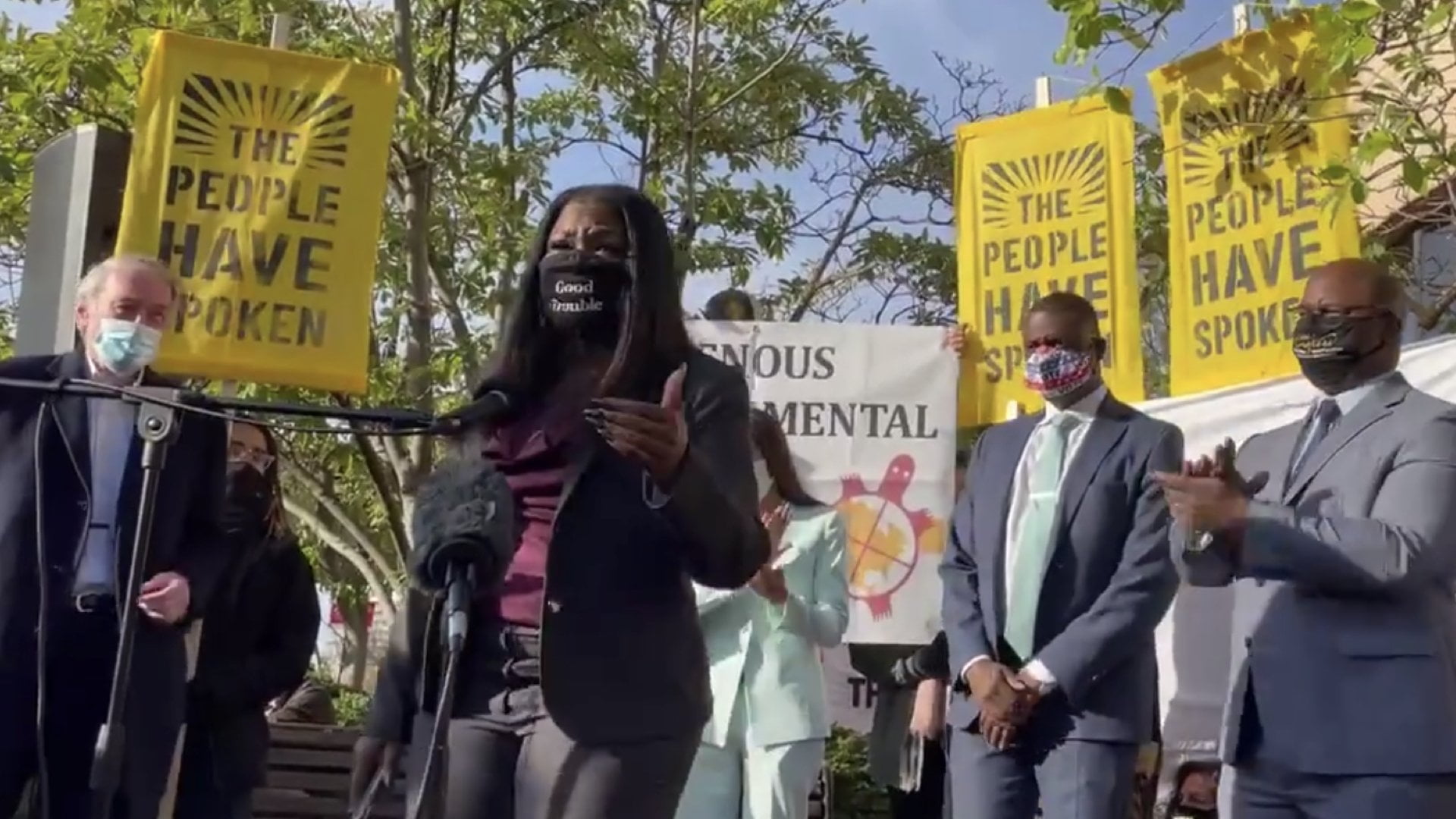 CD (Portland) — Progressives elected to the US Congress joined grassroots climate action leaders from across the country on Thursday at a rally outside the Democratic National Committee’s headquarters in Washington DC, demanding that President-Elect Joe Biden “be brave” and work to pass a bold agenda aimed at combating the climate crisis.

“We’re calling on the Biden administration right now to save lives because there’s no other alternative,” said Bush, who spoke about environmental racism in her community, where black children are ten times as likely as white children to be hospitalized for asthma. “And we’re asking you because we voted for you. Black and brown communities showed up… So we’re asking you to show up for us.”

“For the first time in our lifetimes, we have the opportunity with the Biden-Harris administration to avoid and avert climate catastrophe and ensure a livable future,” said Jones during his remarks.

After Biden won the Democratic primary, members of the Sunrise Movement and progressives who had advised Senator Bernie Sanders (I-Vt) on his presidential campaign met with members of the Biden campaign team and successfully pressured the former vice president to adopt a more ambitious climate action plan than the one he had put forward in the primary.

Biden committed to spending US$2 trillion to help fight the climate crisis and environmental racism and released a plan that called for the elimination of carbon pollution from electricity sources by 2035.

But this week, the Sunrise Movement accused Biden of a “betrayal” when he named Representative Cedric Richmond (D-La), the fifth-largest recipient of fossil fuel money in the House Democratic Caucus, as his liaison between corporations and climate change activists.

The appointment flew in the face of Biden’s campaign promise that he “understands the urgency” of the climate crisis and will work together with advocates, critics said.

“Let’s cut to the chase,” said Anthony Karefa Rogers-Wright, a policy coordinator for Climate Justice Alliance, “marginalized black, brown, and indigenous folk came out to vote, which is the only reason there will even be a Biden administration… He can demonstrate that, ‘he’ll always have our backs’ by scaling up frontline solutions through a Green New Deal rooted in a just transition for workers and communities.”

“Our lives, our people and our solutions must be respected and seen, every day, as important as our votes every two and four years,” he added.

Markey, whose commitment to passing a Green New Deal, which would provide a just transition for fossil fuel workers while transitioning towards a 100% renewable energy economy, encouraged the Sunrise Movement to campaign tirelessly for him to retain his Senate seat, also called on Biden to remember the voters who helped secure his victory.

“Young voters came out in record numbers this election day to send a clear message for urgent and aggressive climate action,” said Markey. “Removing Donald Trump from the White House was a critical first step, but now we must work together to make the Green New Deal a reality. We simply cannot afford half-measures in this effort to save our economy, our democracy, and our very civilization.”

Markey credited the movement with helping to bring climate action champions Bush, Jones, and Bowman to Congress as well, despite criticism of their bold policy agendas by powerful centrists.

“When Alexandria and I introduced the Green New Deal in February of 2019, it was called ‘pie in the sky,’ it was called politically infeasible, it was called unrealistic,” said the senator. “And then we had an election in 2020 and the Sunrise Movement rose up and injected itself into race after race across our country… This isn’t a matter of moving to the left, it’s a matter of doing what’s right.”