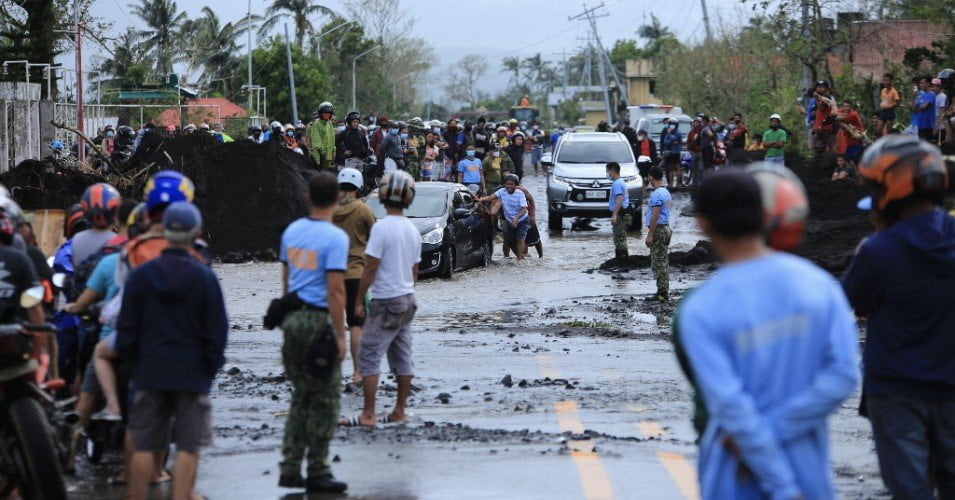 Residents gather along road damaged by heavy rains brought by the super Typhoon Goni after it hit the town of Malinao, Albay province, south of Manila on November 1, 2020. (Photo: Charism Sayat/AFP via Getty Images)

Calls for climate justice emanated from within and beyond the Philippines throughout the weekend as super Typhoon Goni, known locally as Rolly, barreled toward the archipelagic nation as the “strongest landfalling tropical cyclone on record“—ultimately killing 10 people and causing destructive volcanic mudflows.

“Typhoons are getting stronger because of climate change and yet we still don’t get enough action and our leaders doesn’t treat it like a real emergency that it is.”
—Zero Hour Philippines

Goni, now a tropical storm, made its first landfall in the storm-prone Philippines before 5:00 local time Sunday, striking the eastern island province of Catanduanes, according to the Philippine Atmospheric, Geophysical, and Astronomical Services Administration (PAGASA).

The storm made a second landfall near Tiwi, Albay at 7:20 am and a third in San Narcisco, Quezon around noon, PAGASA said.

While Goni only grazed the capital of Manila, the New York Times reported that in the Bicol region of Luzon, the nation’s most populous island, the storm killed at least 10 people, according to the regional Office of Civil Defense. Additionally, nearly 400,000 were displaced, “with almost 350,000 of them sheltering in evacuation centers, and power was out.”

According to the Associated Press, “In a Manila gymnasium that was turned into an emergency shelter, Covid-19 outbreaks were an added worry of displaced residents. The Philippines has had more than 383,000 cases of the virus, the second-most in Southeast Asia behind Indonesia.”

As the storm garnered global headlines and footage of the aftermath circulated on social media, so did demands for both the Filipino government and the international community to take bolder action to address human-caused climate change, which global scientists warn is strengthening tropical cyclones—called typhoons or hurricanes depending on location.

#RollyPh left a trail of destruction in it’s wake on Viga, Catanduanes | via Viga Catanduanes on FB pic.twitter.com/sQImdcwNCF

Ask our government leaders to STEP UP their response by declaring a #ClimateEmergency, and demanding responsibility from the big fossil fuel & cement companies NOW >> https://t.co/K9Sgl6UdE2

Greenpeace Philippines shared a petition urging President Rodrigo Duterte, along with mayors and governors across the nation, to:

The group, and other organizations and advocates, also noted that vulnerable communities are bearing the brunt of the climate crisis while fossil fuel giants and developed nations that have disproportionately caused it are “getting away unscathed.”

The typhoons are getting worse in a climate changed world. Vulnerable countries are bearing the brunt of the impacts while fossil fuel & cement companies fueling the crisis are getting away unscathed.https://t.co/EGhlhfkpl5

Again, we call for climate justice.

TODAY IS THE LAST DAY to meet our $80,000 Fall Campaign goal as we battle against the authoritarianism taking place before our eyes.

Our GHG emissions are less than 0.4% but look how much we are impacted by the inaction and greediness of carbon majors.

World leaders and carbon majors, watch out. You have caused us so much pain and destruction. We demand reparations. https://t.co/DSOadaBXaO

Typhoons are getting stronger because of climate change and yet we still don’t get enough action and our leaders doesn’t treat it like a real emergency that it is. Climate change is real and Philippines is among the top 3 most affected countries! https://t.co/qoNvxfEzGw

In a series of tweets on Sunday, Ajit Niranjan, environment and globalization reporter at DW, Germany’s international broadcaster, pointed out the absence of discussions of climate change in media coverage of Goni.

“It’s too early to say by how much climate change made this storm stronger but there’s important context that we really should report as soon as such disasters strike,” he wrote, “like that by 2050, coastal floods that used to hit once a century will strike many cities *every single year.*”

Niranjan noted that some publications, such as the Times, acknowledged the climate connection, reporting:

The Philippines is situated on the so-called Ring of Fire, a seismically active swath encircling the Pacific Ocean that is vulnerable to earthquakes and volcanoes. Typhoons regularly batter the Philippine archipelago, packed with more than 100 million people.

Deadly floods and landslides are common. And now climate change is exacerbating the Philippines’ weakness to natural disasters, making it one of the most vulnerable countries on the planet, scientists say.

As sea-surface temperatures rise, the Philippines’ positioning in warm ocean waters means the country is being subjected to both bigger and more frequent tropical storms. Residents of low-lying, densely populated slums, such as those on the outskirts of Manila, the capital, are particularly exposed. So are miners and farmers who excavate and till mountainous earth, creating slippery, muddy conditions in which torrents of soil bury can people alive.

Dakila Kim P. Yee, a sociologist at the University of the Philippines Visayas Tacloban College, told the Times, “Climate change is a big international idea, but we are facing this on the local level and we aren’t equipped with enough progressive vision for it.”

Is the Covid-19 Pandemic Mother Nature’s Response to Human Transgression?

Delaying #COP26 Over Coronavirus, Say Green Groups, 'Is Not an Excuse to Postpone Climate Ambition!'

After Sanders Exits Race, Climate Campaigners Thank Him for 'Raising the Bar' and Urge Biden to 'Step Up'
More in:
World, Climate
,
Philippines, Extreme Weather, Greenpeace