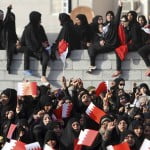 Protesters take to the streets, clashing with police after eight Shia activists are given life sentences. Last Modified: 22 Jun 2011 14:24  Bahrain's government says it has only tried a small number of those involved in recent mass protests [Reuters] Police and protesters have clashed in Bahrain after eight Shia Muslim activists accused of plotting a coup to overthrow … END_OF_DOCUMENT_TOKEN_TO_BE_REPLACED