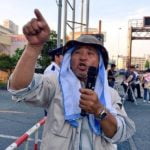 Release Hiroji Yamashiro immediately. 乗松聡子さんが不当逮捕の抗議を英語で。国際アムネスティーからも勧告があります。これも読んでください。 Satoko Norimatsu of the Peace Philosophy Center in Vancouver demanding release of Okinawa peace activist Hiroji Yamashiro an announcing he has the support of Amnesty International. (Facebook video may not be viewable in some cases). Other public figures have also been protesting his … END_OF_DOCUMENT_TOKEN_TO_BE_REPLACED 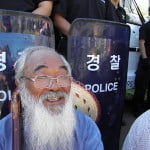 The South Korean Government is constructing a naval base on Jeju Island. Officially named an “Island of Peace” by the late President Roh Moo Hyun, Jeju was the site of a 1948 massacre in which more than 30,000 civilians were estimated to have been slaughtered during a democratic uprising. Located strategically in the Korea Strait, the island’s potential to become a … END_OF_DOCUMENT_TOKEN_TO_BE_REPLACED