'This Is Trump's Failure': US Reports Record 90,400+ Covid Cases in Just 24 Hours—Equivalent to One New Infection Every Second

“Another record day of Covid cases. Not because of testing—but because President Trump has given up on controlling the virus and his administration has failed the American people.” 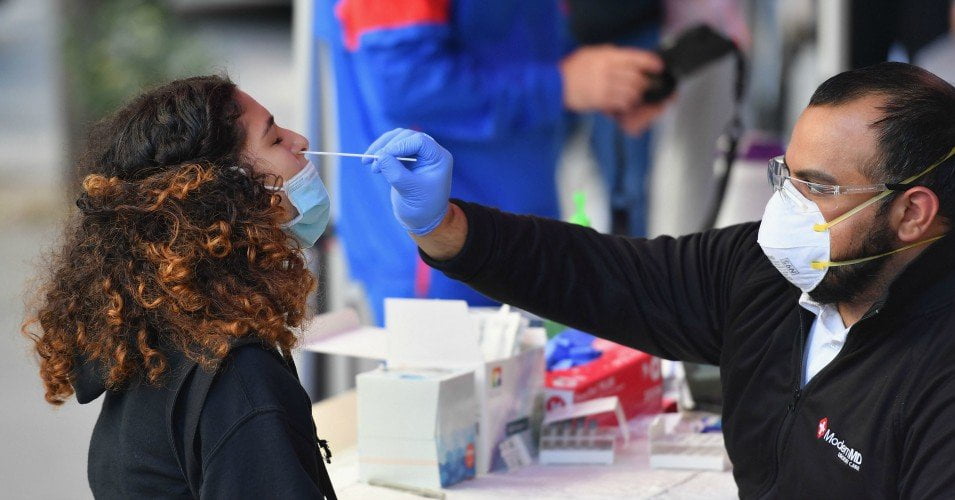 A medical worker takes a nasal swab sample from a student to test for COVID-19 at the Brooklyn Health Medical Alliance urgent care pop up testing site as infection rates spike on October 8, 2020 in New York City. (Photo: Angela Weiss/AFP via Getty Images)

As President Donald Trump stuck to his falsehood-riddled closing message in the final stretch of the 2020 campaign—the U.S. is “rounding the turn” on the pandemic, the economy is roaring back, and public health measures are politically motivated ploys to harm his reelection chances—the U.S. on Thursday reported a daily record of 90,400-plus new coronavirus infections, the equivalent of more than one case every second.

Coronvirus cases are on the rise in nearly every U.S. state including Florida, where Trump on Thursday held an in-person campaign rally during which he paid lip service to basic precautions, such as wearing a mask and social distancing, as a crowd of his largely maskless supporters stood inches apart from each other.

The president’s remarks came hours before the U.S. reported 90,446 new coronavirus cases and around 1,000 deaths Thursday, bringing the nation’s infection total to more than nine million as the death toll surpassed 228,700. Hospitalizations are also trending upward at an alarming rate.

“This is Trump’s failure,” tweeted Randi Weingarten, president of the American Federation of Teachers, in response to the staggering new figures.

Another record day of COVID cases. Not because of testing – but because President Trump has given up on controlling the virus and his Administration has failed the American people.https://t.co/pBfAb0IyMH

In its weekly update on the pandemic published Thursday, the Covid Tracking Project pointed out that “unlike the spring and summer outbreaks, the third surge is geographically dispersed, and counts are up in every region of the country. An increase in testing is not sufficient to explain the numbers.”

“The country reported a record number of tests at 8.2 million, but case growth (24 percent) far outpaced test growth (9 percent), as we explained earlier this week,” the organization noted. “That’s also true for the entire month of October: Forty-seven of the 50 states, along with the District of Columbia, have seen cases rise faster than reported tests since October 1.”

The per-capita case numbers in the upper Midwest are extremely high. pic.twitter.com/QzJ0LCLmBx

As the Washington Post reported late Thursday, “coronavirus cases are surging in every competitive state before Election Day, offering irrefutable evidence against President Trump’s closing argument that the pandemic is nearly over and restrictions are no longer necessary.”

“In the 13 states deemed competitive by the Cook Political Report,” the Post noted, “the weekly average of new cases reported daily has jumped 45 percent over the past two weeks, from fewer than 21,000 on October 14 to more than 30,000 on October 28.”

With the president and members of his administration continuing to publicly downplay the pandemic and indicate the White House has given up trying to control the spread, Wisconsin Gov. Tony Evers—whose state has been hit hard by the coronavirus in recent days with more than 200 deaths reported over the past week—said Thursday that “there is no way to sugarcoat it: We are facing an urgent crisis.”

“There is an imminent risk to you, your family members, your friends, your neighbors,” Evers warned.