Two right-wing lawmakers insist Trump won the election, while 220 GOP members of the House and Senate—roughly 88 percent of congressional Republicans—refuse to say either way. “Send me a list,” Trump tweeted, “of the RINOs” who recognize Biden as the winner. 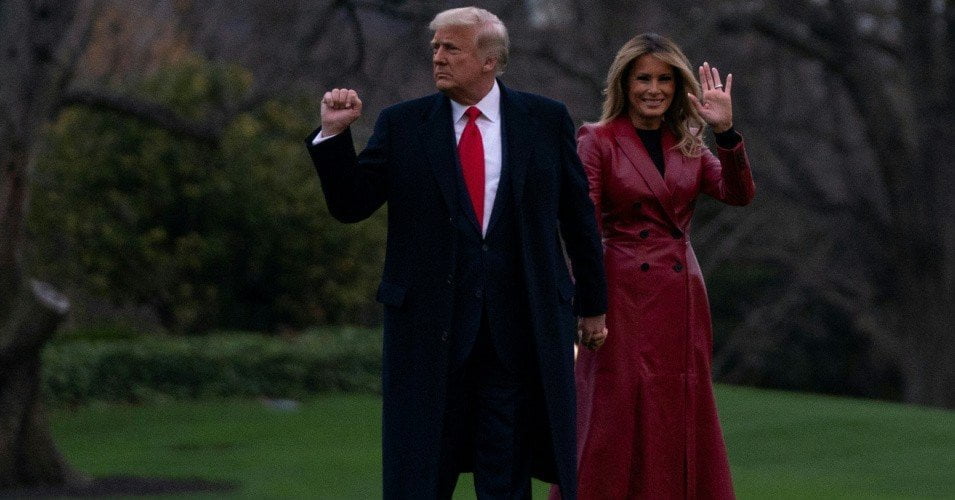 U.S. President Donald Trump and First Lady Melania Trump prepare to board Marine One as they depart the White House on December 5, 2020 in Washington, D.C. (Photo: Alex Edelman/AFP via Getty Images)

Just 27 out of 249 congressional Republicans acknowledge that Joe Biden defeated President Donald Trump in the 2020 election, according to a Washington Post survey, and Trump on Saturday demanded that they be identified.

More than a month after President-elect Biden claimed a decisive victory over the lame-duck president—winning the popular vote by more than 7 million and garnering 306 votes in the Electoral College—Reps. Mo Brooks (R-Ala.) and Paul Gosar (R-Ariz.) still insist Trump won the race, despite all evidence to the contrary.

Another 220 GOP members of the House and Senate—roughly 88 percent of congressional Republicans—refuse to say who won.

Those are the findings of a Washington Post survey conducted this week.

Beginning “the morning after Trump posted a 46-minute video Wednesday evening in which he wrongly claimed he had defeated Biden and leveled wild and unsubstantiated allegations of ‘corrupt forces’ who stole the outcome from the sitting president,” a team of 25 reporters contacted aides for all 249 Republicans in the House and Senate by email and phone, the Post explained.

In addition to researching “public statements made by GOP lawmakers in recent weeks to determine their stance on Biden’s win,” the Post reporters asked three questions:

According to the Post, only nine congressional Republicans oppose Trump’s ongoing efforts to claim victory, nine others—including Sens. Ted Cruz (R-Texas) and Lindsey Graham (R-S.C.)—support his attempt to overturn the election results, and 231 declined to answer.

Brooks and Gosar said they will not accept Biden as the legitimately elected president of the U.S. regardless of what happens when electors meet on December 14.

“In my judgement, this is the worst election theft in the history of the United States,” Brooks said, while Gosar claimed that there is “too much evidence of fraud.”

The lawmakers’ statements come just days after Attorney General William Barr, a key Trump ally, admitted that “we have not seen fraud on a scale that could have” affected the outcome of the election, as Common Dreams reported.

Thirty-two congressional Republicans said they will accept Biden’s victory if he wins a majority in the Electoral College, and 215 did not respond.

The Post distilled the survey results into the following chart: 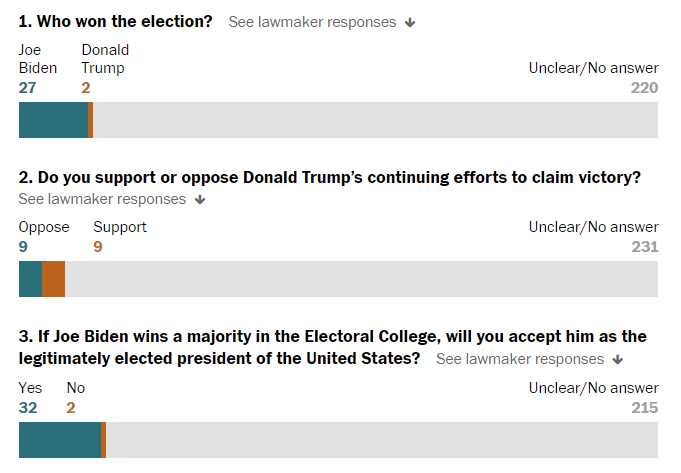 Before the newspaper made an update upon receiving two additional responses, Trump on Saturday tweeted: “25, wow! I am surprised there are so many. We have just begun to fight. Please send me a list of the 25 RINOS,” referring to “Republicans in name only.”

The names of the 27 Republicans who recognize Biden as the winner are readily available—listed in the article, even—though Trump added that he reads “the Fake News Washington Post as little as possible!”

According to the Post, “the results demonstrate the fear that most Republicans have of the outgoing president and his grip on the party, despite his new status as just the third elected president to lose reelection in the past 80 years.”

Trump on Saturday traveled to Georgia to campaign in support of Republican Sens. Kelly Loeffler and David Perdue—who face January runoff elections that will determine which party controls the U.S. Senate—but The Guardian reported that conservatives are worried the president might hurt the GOP’s chances if he spends most of his time making baseless claims about how the election was rigged.