“This is a global crisis and the solutions must be shared equitably as global public goods.” 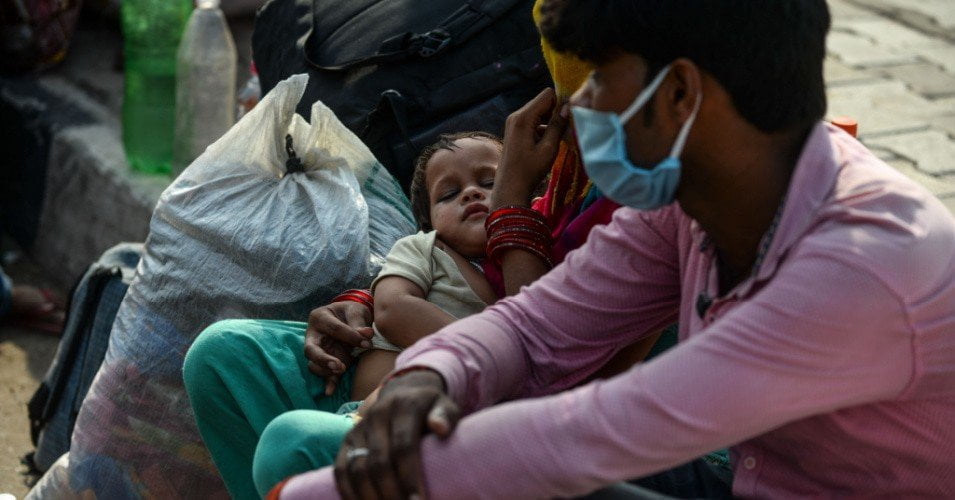 Migrant workers with their families rest at a bus stop as they walk back on their journey back to their hometowns in Uttar Pradesh and Bihar states after the Indian government eased a nationwide lockdown as a preventive measure against the spread of Covid-19, in New Delhi on May 14, 2020. Millions in India were left destitute and desperate 50 days into the coronavirus lockdown. (Photo: Sajjad Hussain/AFP via Getty Images)

Top United Nations officials on Friday called on nearly 200 member nations—including the world’s wealthiest and most powerful—to help raise tens of billions of dollars in aid for poor countries facing pandemic, ongoing war, and encroaching famine in what will be a “humanitarian crisis year” in 2021.

World Food Programme (WFP) chief David Beasley warned that famine is “knocking on the door” for a number of developing countries and conflict zones including Yemen, Burkina Faso, northeastern Nigeria, and South Sudan. Beasley was joined by World Health Organization (WHO) head Tedros Adhanom Ghebreyesus in calling for $35 billion in humanitarian aid for countries where millions were already facing displacement, hunger, and public health crises before the coronavirus pandemic began.

Make no mistake, 2021 will be even worse than 2020 for Yemen’s most vulnerable people. Famine can still be prevented – but that opportunity is slipping away with every day that passes.

These new alarming numbers must be a wake-up call to the world. #YemenCrisis

As Common Dreams reported last month, the WFP issued a study showing that “a toxic combination of conflict, economic decline, climate extremes, and the Covid-19 pandemic…is driving people further into the emergency phase of food insecurity.”

The number of people in need of humanitarian aid has increased by 40% this year, as the rapid spread of Covid-19 has forced many to go with reduced incomes, or not at all, amid lockdowns.

“2021 is literally going to be catastrophic based on what we’re seeing at this stage of the game,” Beasley said Friday.

While millions around the world have faced worsening poverty and hunger at levels not seen in wealthier nations during the pandemic, the dire situation for poor countries is being compounded by what Tedros called a “vaccine stampede” which appears set to continue into 2021.

In recent weeks, pharmaceutical companies Pfizer and Moderna have announced promising results of their coronavirus vaccine trials, with the earliest-available doses expected to get to some people in the U.S. by the end of December.

Within days of Pfizer’s announcement that its trial had yielded promising results, 80% of the company’s vaccine supply had already been sold to several of the richest countries in the world, comprising just 14% of the global population. Seventy-eight percent of Moderna’s vaccine was also claimed by wealthy countries shortly after the company’s announcement.

The U.S. has purchased hundreds of millions of doses of the vaccines, and is one of the few wealthy countries that has not agreed to take part in the global Covax facility, an initiative to ensure equitable access to vaccines in order to protect public health around the world.

The WHO chief called for an immediate investment of $4.3 billion for Covax on Friday. Next year, the facility will need an injection of $7.8 billion from international donors, plus funding to help set up distribution systems.

“We simply cannot accept a world in which the poor and marginalized are trampled by the rich and powerful in the stampede for vaccines,” Tedros told the U.N. General Assembly on Friday.

The WHO chief called for an immediate investment of $4.3 billion for Covax. Next year, the facility will need an injection of $7.8 billion from international donors, plus funding to help set up distribution systems.
“This is a global crisis and the solutions must be shared equitably as global public goods,” Tedros said.
Our work is licensed under a Creative Commons Attribution-Share Alike 3.0 License. Feel free to republish and share widely.