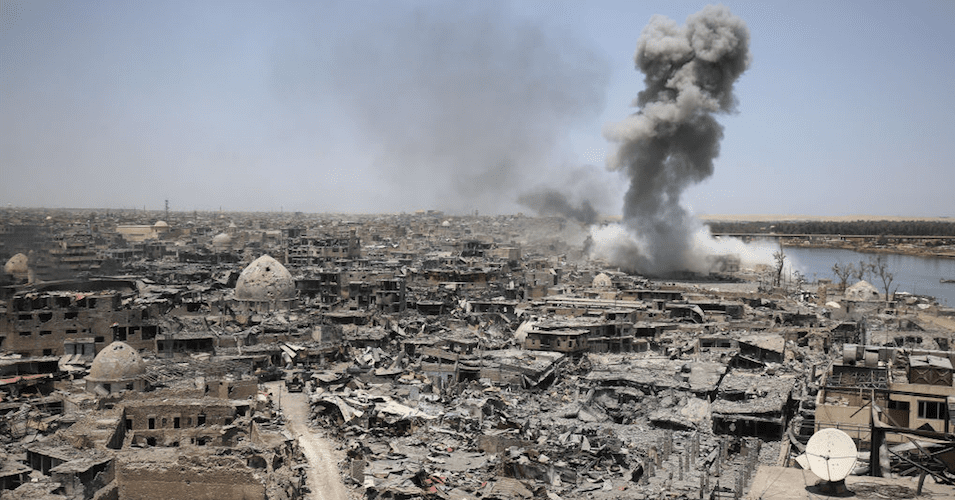 U.S. bombs and bullets have claimed at least hundreds of thousands of civilian lives this century. Here, a U.S. airstrike against Islamic State militants in densely-populated Mosul, Iraq on July 9, 2017 is shown. (Photo: Ahmad Al-Rubaye/AFP/Getty Images)

The Washington Post on Wednesday published an extraordinary interactive report that names hundreds of civilians killed by coalition airstrikes during the U.S.-led war against the so-called Islamic State.

The report, which contains harrowing survivor testimonies, draws upon data from the U.S. military and the U.K.-based journalistic monitor group Airwars to name each victim, as well as when and where they were killed. The paper mentions “thousands” of civilian casualties since President Barack Obama launched the war against ISIS militants in Iraq and Syria in 2014, but focuses only on the approximately 1,400 deaths acknowledged by both the Pentagon and Airwars.

Coalition airstrikes against ISIS resulted in more than 1,400 civilian deaths, according to data made public for first time https://t.co/hQ6xuiBqzP

The Post cites the military’s figure of 1,398 civilian deaths caused by the more than 34,000 U.S.-led air and artillery strikes in the two countries, and in the small print of one of the report’s interactive images the paper acknowledges that “others say the actual number is much higher.”

Those “others” include Airwars itself. The group estimates that between 8,310 and 13,187 civilians, including as many as 2,361 children, have died in coalition strikes during the course of the anti-ISIS campaign. Airwars has named 3,712 of these victims. The Post report ignores these figures.

Update: The U.S. military added 12 more civilians to its tally of humans accidentally killed in the ongoing war against ISIS in Iraq and Syria.

That brings the admitted total to 1,410, according to September’s report from CENTCOM.

Instead, the paper focuses on notoriously conservative Pentagon casualty figures, as well as Airwars incident reports that have been rated “confirmed” by the group. Airwars’ methodology ranks casualty reports in six levels of certainty: “confirmed,” “fair,” “weak,” “contested,” “discounted,” and “no civilian harm reported.” The problem with the “confirmed” category is that U.S. military officials often fail to investigate or acknowledge (pdf) deaths and injuries caused by coalition airstrikes. Many of the casualty incidents reported by local and international media fall into Airwars’ “fair” category.

Airwars’ own reporting paints a very different casualty picture from the Post’s. In August 2015 the group published Cause for Concern (pdf), which counted between 459 and 1,086 Iraqi and Syrian civilians killed by coalition airstrikes in just the first 11 months of the anti-ISIS campaign. By the end of the Obama administration, the group reported (pdf) “at least 1,500 non-combatants” killed in Syria and Iraq.

Then came President Donald Trump, who infamously promised to “bomb the shit out of” ISIS militants and “take out their families.” Trump loosened rules of engagement meant to protect civilians, with former Defense Secretary James Mattis—who earned his “Mad Dog” moniker during the atrocity-laden First Battle of Fallujah in 2004—declaring in May 2017 that the U.S. was shifting from a policy of “attrition” to one of “annihilation” in the war against ISIS.

“Civilian casualties are a fact of life in this sort of situation,” Mattis said at the time.

As coalition forces gained the upper hand in the war against ISIS, U.S.-led troops moved to liberate the terror group’s two de facto capitals, Mosul in Iraq and Raqqa, Syria. This objective was achieved through sheer overwhelming firepower—and tremendous death and injury. The Associated Press reported 9,000 civilians killed by all sides during the battle for Mosul, which it called a “graveyard.” Raqqa suffered a similar fate.

The Post report provides a devastating account of the deadliest U.S. airstrike of the battle for Mosul, which obliterated an apartment building in the Jadida neighborhood of West Mosul on March 17, 2017:

Responding to sniper fire against allied Iraqi forces, an American aircraft, operating with erroneous intelligence that no civilians were inside the building, dropped a GBU-38 bomb, carrying nearly 200 pounds of explosive material, on the concrete structure. The bomb, U.S. military officials subsequently concluded, ignited an even more powerful cache of explosives that the militants had stored inside the building, collapsing the structure and killing more than 100 civilians.

That is an exceedingly conservative figure—credible corporate media reports at the time placed the death toll from what is now known as the Mosul massacre at well over twice that number, citing Iraqis who pulled bodies and pieces of bodies from the mangled ruins of the building. At the time, the Post itself reported that “the likely numbers are somewhere between 130 and 230.”

By the end of May 2019, Airwars reported (pdf) “at least 7,978 non-combatants likely died as a result of U.S.-led actions—that is, predominantly but not solely airstrikes.” By that time ISIS had been all but vanquished in both Iraq and Syria, but Airwars reports of U.S.-led airstrikes—and civilian casualties—continue to this day.

In a nation whose military claims it doesn’t “do body counts” and whose corproate media more often than not ignore or bury reports of civilian casualties, it is difficult if not impossible to say exactly how many innocent people are killed during its wars. In February 2019, the Iraqi High Commission for Human Rights said around 11,800 Iraqi and Syrian civilians, including some 2,300 children, were killed in U.S.-led bombing. These numbers closely mirror Airwars’ figures.

This, on top of the at least hundreds of thousands—and possibly as many as two million (pdf)—men, women, and children killed in at least seven nations since the September 11, 2001 attacks on the United States. And since waging the world’s only nuclear war in 1945, the U.S. military has killed more foreign civilians than any other armed force on the planet—by far.

With the Election Over, Congress Must Remember the Rest of the World