'What a Failed State Looks Like': GOP Under Fire for Blocking Necessary Funds as Covid Vaccine Distribution Begins

“The end of a tragic, crippling pandemic is in sight and Senate Republicans can’t get around to authorizing any money to complete the job.” 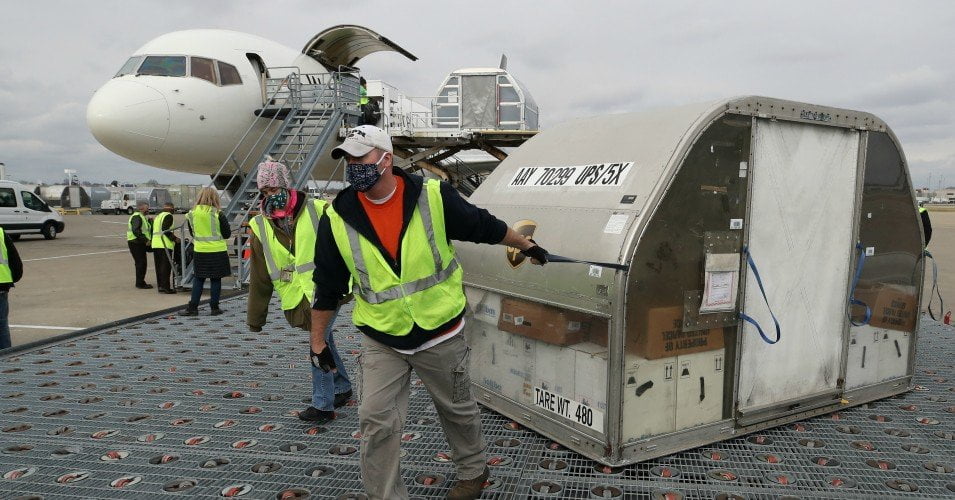 UPS employees move one of two shipping containers containing the first shipments of the Pfizer and BioNTech Covid-19 vaccine on a ramp at UPS Worldport in Louisville, Kentucky on Sunday, December 13, 2020. (Photo: Michael Clevenger/Pool/Getty Images)

As U.S. distribution of the newly approved Pfizer-BioNTech coronavirus vaccine kicked off Sunday with the shipment of millions of doses to sites across the nation, Senate Republicans faced mounting outrage for continuing to block federal funds that crisis-ravaged states and localities desperately need to carry out an unparalleled mass inoculation effort.

Facing large budget shortfalls due to the Covid-19 pandemic and lack of relief from the deadlocked Congress, state and local governments will soon be tasked with executing a rapid vaccination campaign that will require large quantities of supplies as well as new clinics, additional workers, and public outreach—all of which will cost money that states and localities fear they don’t have.

As the Wall Street Journal reported Sunday, “State leaders say they are short billions of dollars in funding needed to successfully provide Covid-19 vaccinations to all Americans who want to be inoculated by health officials’ June goal.”

“States are so stretched. It would be a shame if all the effort on Warp Speed for development isn’t warp speed for distribution.”
—Dr. Leana Wen, George Washington University

“The federal government is providing the vaccine, along with syringes, needles, face masks, and shields,” the Journal noted. But local officials are warning of a repeat of the Trump administration’s slow and inadequate rollout of protective equipment in the early months of the pandemic, a failure that resulted in a chaotic free-for-all as states scrambled to obtain necessary supplies.

Nevertheless, the Journal reported, “officials in several states said they would spend whatever is needed to get residents vaccinated. Some said that might force spending cuts in areas like education, unless Congress provides additional funding or the federal government reimburses a large chunk of their rollout costs.”

The Food and Drug Administration (FDA) on Friday authorized the Pfizer-BioNTech coronavirus vaccine for emergency use, setting in motion an unprecedented and urgent campaign to distribute the vaccine as U.S. Covid-19 deaths approached 300,000.

The FDA’s move, and the subsequent shipment of around three million doses of the vaccine to facilities across the nation, came as talks over a coronavirus relief package remained at a standstill, calling into question whether billions of dollars for vaccine distribution and additional relief to state and local governments will be approved before the end of the year.

“If you want to know what a failed state looks like, this is it,” David Dayen, executive editor of The American Prospect, tweeted Sunday. “The end of a tragic, crippling pandemic [is] in sight and Senate Republicans can’t get around to authorizing any money to complete the job.”

Dr. Leana Wen, former health commissioner for Baltimore and a professor at George Washington University, warned that states “are running a marathon at sprint speed with very little support.

“States are so stretched,” Wen told the Journal. “It would be a shame if all the effort on Warp Speed for development isn’t warp speed for distribution.”

Congressional Republicans have for months dismissed Democrats’ calls for robust aid to state and local governments, and Senate Majority Leader Mitch McConnell (R-Ky.) has made clear that he will not approve such relief without the inclusion of a sweeping liability shield for corporations—a proposal that consumer advocacy groups, labor unions, and progressive lawmakers have denounced as a “get-out-of-jail-free card” for large companies.

“Imagine holding emergency aid hostage—help for the unemployed, small businesses, first responders, people, funding to deliver a vaccine—to give corporations legal immunity. But that has been the GOP position for eight months,” Senate Minority Leader Chuck Schumer (D-N.Y.) tweeted last week. “Senator McConnell: It is past time for the Senate to act.”

On Monday, a bipartisan group of lawmakers from both chambers of Congress is expected to unveil legislative text for a $908 billion relief proposal that has been in the works for weeks. Politico reported late Sunday that “the deal is expected to be split into two pieces… One would be a $748 billion piece of coronavirus relief with less controversial items like schools and healthcare; the other would marry $160 billion in money for local governments with a temporary liability shield.”

As it stands, the bipartisan proposal reportedly contains $16 billion in funding specifically for vaccine distribution, an amount that has been criticized as inadequate. Dayen on Saturday called the proposed figure “appalling.”

$16 billion for vaccine distribution is appalling. It should be the main thing on this list, and go toward vaccine manufacturing, shipping, paying all state costs, hiring to administer and remind for 2nd dose, and paying people to take it https://t.co/aVjFKNJYcC

Lower Drug Prices Now, a progressive advocacy coalition, tweeted that “a Covid-19 vaccine doesn’t do much good if our communities don’t have the resources to distribute it. We need lawmakers to come together and pass Covid relief if we want to beat this pandemic.

“The Senate Majority leader blocked the HEROES Act, and ‘hit pause’ on Covid relief while he continued confirming judge after judge,” the coalition said Sunday. “So many lives and businesses are at stake, we can’t wait any longer.”