Defeating Trump is a crucial—and certainly insufficient—precondition for making possible the kind of changes in government policies that are desperately required for social decency. 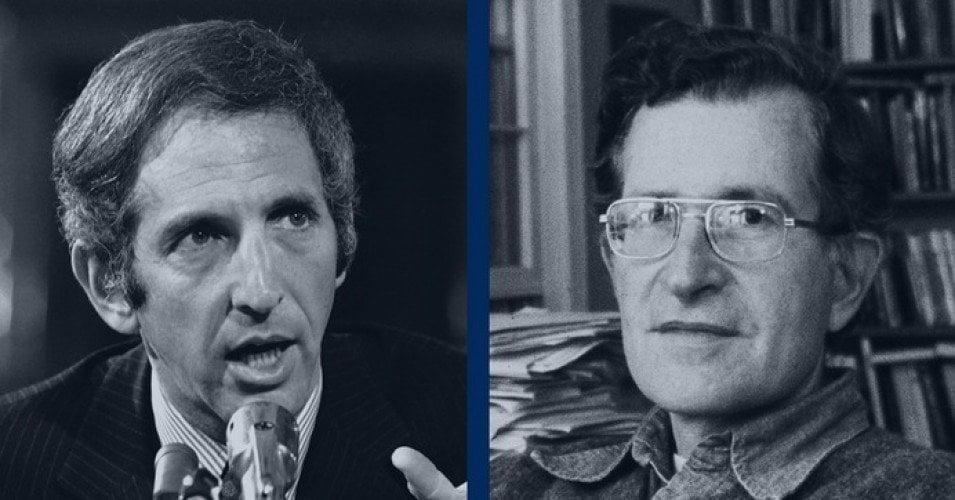 Progressive luminaries Daniel Ellsberg (l) and Noam Chomsky (r) both argue that excising President Donald Trump from the top of the executive branch is essential. “Take the trouble to remove him from the political world,” Chomsky says. “Then go on with the real work of politics.” (Image: University of Arizona)

“There is a kind of an official view about democracy—it says that you, the public, are spectators not participants,” activist and scholar Noam Chomsky points out in a new video. “You have a function. The function is to show up every couple of years, push a lever, go home, don’t bother the important people who run the world, you’ve done your job. We can’t accept that.”

At the same time, Chomsky is vehement about the urgent necessity of defeating Donald Trump. “Sometimes it’s worthwhile to take a little time away from real politics, an interlude, and make sure you get somebody out. This time it is critically important,” Chomsky says in the video (produced by my colleagues with the Vote Trump Out campaign). “There’s a real malignant cancer that has to be excised.”

Excising Trump from the top of the executive branch is essential. “Take the trouble to remove him from the political world,” Chomsky says. “Then go on with the real work of politics. Creating. Understanding. Consciousness. Organizing. Activism and engagement. Everything from your local school board, your local community, on to the international world. All the time. That includes pressing whoever is in office to keep their word and go beyond.”

“Take the trouble to remove Trump from the political world. Then go on with real work of politics” – Noam Chomsky gives closing remarks on the election with @RashidaTlaib, @RoKhanna, and @ninaturner, as they explain why we must continue the work long after we #VoteTrumpOut pic.twitter.com/SdlJ8L2sR9

Defeating Trump is a crucial—and certainly insufficient—precondition for making possible the kind of changes in government policies that are desperately required for social decency. “Under a Biden presidency, progressives would need to be persistent from the very beginning in challenging and opposing many of the things that he may propose,” Daniel Ellsberg wrote this month in the Detroit Metro Times. “Yet, for now, the imperative need is to free the nation from Trump’s unhinged and destructive grip.”

Ellsberg, who has been an activist for peace and social justice ever since releasing the Pentagon Papers in 1971, has no illusions about the Democratic nominee. “Joe Biden’s record is not at all progressive,” he tweeted last week. “So how can I ask progressives to vote for Biden and urge others to do so? Three words: Trump. Climate. Democracy.”

And Ellsberg added: “If you’re not urging others to vote for Biden, you’re not helping remove a would-be Mussolini from the White House balcony. Especially in swing states, by encouraging others to vote for someone else or not to vote at all, you’re risking that Trump stays, and the Paris climate goals stay decisively out of reach.” Ellsberg urged people to “do all you can” to “remove a climate-denier and would-be dictator from the White House.”

President Trump is a dream come true for those who despise democracy. The year he moved into the Oval Office, a book by historian Nancy MacLean—Democracy in Chains—documented what she called “the single most powerful and least understood threat to democracy today: the attempt by the billionaire-backed radical right to undo democratic governance.”

The forces aligned with Donald Trump have achieved enormous breakthroughs during the last four years in their quest to “undo democratic governance.” The potential for democracy in the United States will largely hinge on whether Trump gains re-election.

Norman Solomon is co-founder and national coordinator of RootsAction.org. His books include “War Made Easy: How Presidents and Pundits Keep Spinning Us to Death” and “Made Love, Got War: Close Encounters with America’s Warfare State.”