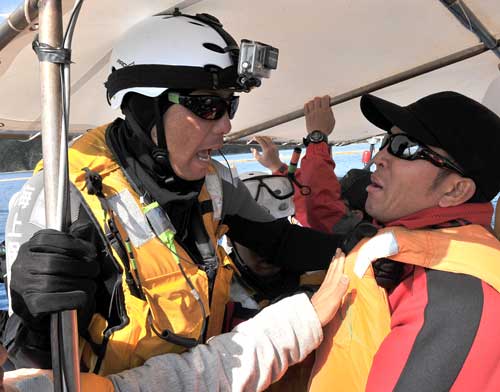 CLICK PHOTO TO SEE VIDEO
This is the Japanese Coast Guard attempt to destroy the anti-base movement, but they will not succeed. For more on this, please read the article by David McNeil in the Irish Times

For two decades, a group of mainly elderly people has fought a war of attrition with Japanese authorities over the building of a huge American military base on Okinawa, Japan’s southernmost prefecture. The jovial ringleader of the protests in recent years has been Hiroji Yamashiro.

A retired civil servant, Yamashiro (65) could be found in all weather outside the gates of the base, rallying protesters with songs, chants and poetry. Last autumn, police arrested him on charges of snipping a fence. Over three months later he is still in custody, a prisoner of conscience, say his friends.

“It’s clear that the purpose of detaining him is to stop the anti-base protests,” says Isamu Nakasone, a retired judge-turned Okinawa activist. “He took a central role in opposing the military base. His detention is a warning to others, just as construction enters a key phase.”

The land, sea and air base, rising on reclaimed land out of Oura Bay in the north of Okinawa’s main island, would have a dock and two 1,800m runways, towering 10m above the ocean. This week, construction has moved up a gear with the arrival of an army of security personnel and a ship to dredge the bay.

But though it will host American marines and warplanes, the Japanese government is building the base. Once bitter enemies, Tokyo and Washington share a six-decade military alliance. And, increasingly, they share a common concern: the rise of China. The base would be the “tip of the spear” in military parlance, helping to contain Beijing.

A speck in the Pacific 1,000 miles from Tokyo, Okinawa shoulders the burden of the Japan-US alliance. Locals live uneasily with the heavy American military presence: 19,000 marines and dozens of military installations, including the US army’s only jungle warfare training unit, Takae, all on Okinawa’s tiny main island.

Futenma, a marine airbase, occupies nearly two square miles in the crowded city centre of Ginowan. In 1996, after three American servicemen were convicted of raping a 12-year-old Japanese girl, the US and Japan agreed to close the aging facility and build a replacement near the quiet fishing village of Henoko.

Most locals reject that plan because it still leaves Okinawa shouldering a disproportionate share of the military burden. A survey last year found that 84 per cent of Okinawans oppose the planned Henoko base – the highest share since the government of Shinzo Abe, the current prime minister, took power in 2012.

Henoko is central to Abe’s plans to boost military defences across Okinawa’s 160-island Ryukyu chain. Okinawa was occupied by the US military after the second World War. The battle to take the main island in 1945 left up to 100,000 civilians dead along with 100,000 Japanese soldiers and over 12,000 Americans. Some islanders were forced to commit suicide by the Japanese military.

Okinawans, once part of an independent kingdom, believe they were sacrificed as a buffer between the invading Americans and the Japanese mainland. Generations have grown up since pledging “never again”.

Day after day, Yamashiro rallied his colleagues against the planned base. His greatest anger was reserved for Japan, which he and his fellow protesters see as a vassal state, in hock to US militarism. A tooled-up Okinawa makes conflict with China more likely, not less, they say.

Police detained him near Takae on October 17th on suspicion that he had cut a barbed wire fence. He has since been served with fresh arrest warrants, including one charging him with obstructing business in front of the base site. Though legal under Japanese law, repeated rearrests are controversial and have been used before to silence political opponents, says Lawrence Repeta, a law professor at Meiji University in Tokyo. He calls the tactics “ a shocking display of raw government power”.

Police in Naha, Okinawa’s capital, declined to answer questions on the case, saying the decision to hold Yamashiro had been made by prosecutors. Naha district prosecutor’s office said they had no comment on the arrests.

Amnesty International recently joined demands that Yamashiro be freed, noting that his health is deteriorating and he has been denied all requests for bail. The arrest of such a “symbolic opposition figure” has had a chilling effect on others exercising their rights to peacefully demonstrate, Amnesty said. “Some activists now hesitate to join the protest for fear of reprisals.”

That, says Nakasone, is precisely the point.