Mike Davis, whose 2006 book The Monster at Our Door: The Global Threat of Avian Flu warned of the threat of a global bird flu pandemic, explains how globalized agribusiness set the stage for a frightening outbreak of the swine flu in Mexico.

The Spring Break hordes returned from Cancún this year with an invisible but sinister souvenir.

The Mexican swine flu, a genetic chimera probably conceived in the fecal mire of an industrial pigsty, suddenly threatens to give the whole world a fever. Initial outbreaks across North America reveal an infection rate already traveling at higher velocity than the last official pandemic strain, the 1968 Hong Kong flu.

Stealing the limelight from our officially appointed assassin–the otherwise vigorously mutating H5N1, known as bird flu–this porcine virus is a threat of unknown magnitude. Certainly, it seems far less lethal than SARS in 2003, but as an influenza, it may be more durable than SARS and less inclined to return to its secret cave. 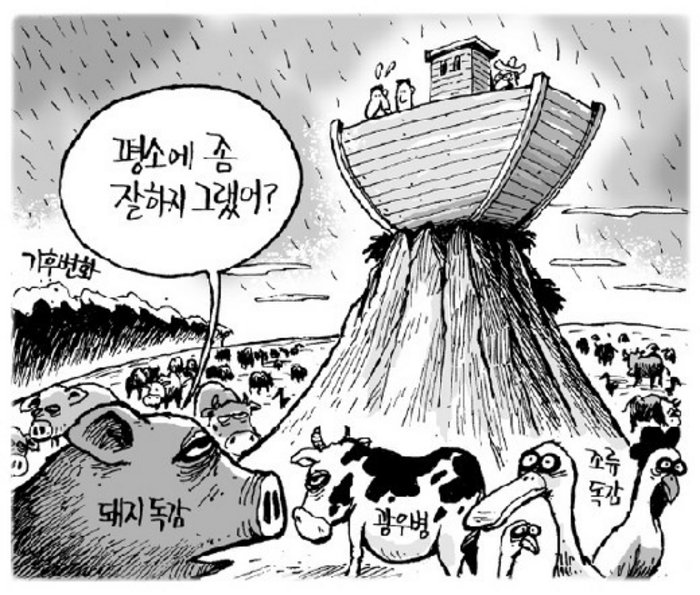 Noah’s ark. With climate change threatening in the background, Pig Flu, standing with his buddies Mad Cow Disease and Avian Influenza, asks the humans who are seeking refuge, “Why haven’t you taken better care of this place?” Courtesy of Hankyoreh.

Given that domesticated seasonal Type-A influenzas kill as many 1 million people each year, even a modest increment of virulence, especially if coupled with high incidence, could produce carnage equivalent to a major war.

Meanwhile, one of its first victims has been the consoling faith, long preached in the pews of the World Health Organization (WHO), that pandemics can be contained by the rapid responses of medical bureaucracies, independent of the quality of local public health.

Since the initial H5N1 deaths in Hong Kong in 1997, the WHO, with the support of most national health services, has promoted a strategy focused on the identification and isolation of a pandemic strain within its local radius of outbreak, followed by a thorough dousing of the population with anti-viral drugs and (if available) a vaccine.

An army of skeptics has rightly contested this viral counter-insurgency approach, pointing out that microbes can now fly around the world (quite literally in the case of avian flu) faster than the WHO or local officials can react to the original outbreak. They also pointed to the primitive, often nonexistent surveillance of the interface between human and animal diseases.

But the mythology of bold, preemptive (and cheap) intervention against avian flu has been invaluable to the cause of rich countries, like the U.S. and Britain, which prefer to invest in their own biological Maginot Lines, rather than dramatically increase aid to epidemic frontlines overseas–as well as to Big Pharma, which has battled Third World demands for the generic, public manufacture of critical antivirals like Roche’s Tamiflu.

The swine flu, in any case, may prove that the WHO/Centers for Disease Control (CDC) version of pandemic preparedness–without massive new investment in surveillance, scientific and regulatory infrastructure, basic public health and global access to lifeline drugs–belongs to the same class of Ponzified risk management as AIG derivatives and Madoff securities.

It isn’t so much that the pandemic warning system has failed as it simply doesn’t exist, even in North America and the EU.

Perhaps it is not surprising that Mexico lacks both capacity and political will to monitor livestock diseases and their public health impacts, but the situation is hardly better north of the border, where surveillance is a failed patchwork of state jurisdictions, and corporate livestock producers treat health regulations with the same contempt with which they deal with workers and animals.

Similarly, a decade of urgent warnings by scientists in the field has failed to ensure the transfer of sophisticated viral assay technology to the countries in the direct path of likely pandemics. Mexico has world-famous disease experts, but it had to send swabs to a laboratory in Winnipeg (which has less than 3 percent of the population of Mexico City) in order to identify the strain’s genome. Almost a week was lost as a consequence.

But no one was less alert than the legendary disease controllers in Atlanta. According to the Washington Post, the CDC did not learn about the outbreak until six days after the Mexican government had begun to impose emergency measures. Indeed, the Post reported, “U.S. public health officials are still largely in the dark about what’s happening in Mexico two weeks after the outbreak was recognized.”

There should be no excuses. This is not a “black swan” flapping its wings. Indeed, the central paradox of this swine flu panic is that while totally unexpected, it was accurately predicted.

Six years ago, Science dedicated a major story (reported by the admirable Bernice Wuethrich) to evidence that “after years of stability, the North American swine flu virus has jumped onto an evolutionary fast track.”

Since its identification at the beginning of the Depression, H1N1 swine flu had only drifted slightly from its original genome. Then, in 1998, all hell broke loose.

A highly pathogenic strain began to decimate sows on a factory hog farm in North Carolina, and new, more virulent versions began to appear almost yearly, including a weird variant of H1N1 that contained the internal genes of H3N2 (the other type-A flu circulating among humans).

Researchers whom Wuethrich interviewed worried that one of these hybrids might become a human flu (both the 1957 and 1968 pandemics are believed to have originated from the mixing of bird and human viruses inside pigs), and urged the creation of an official surveillance system for swine flu. That admonition, of course, went unheeded in a Washington prepared to throw away billions on bioterrorism fantasies while neglecting obvious dangers.

But what caused this acceleration of swine flu evolution? Probably the same thing that has favored the reproduction of avian flu.

Virologists have long believed that the intensive agricultural system of southern China–an immensely productive ecology of rice, fish, pigs, and domestic and wild birds–is the principal engine of influenza mutation: both seasonal “drift” and episodic genomic “shift.” (More rarely, there may occur a direct leap from birds to pigs and/or humans, as with H5N1 in 1997.)

But the corporate industrialization of livestock production has broken China’s natural monopoly on influenza evolution. As many writers have pointed out, animal husbandry in recent decades has been transformed into something that more closely resembles the petrochemical industry than the happy family farm depicted in schoolbooks.

In 1965, for instance, there were 53 million American hogs on more than 1 million farms; today, 65 million hogs are concentrated in 65,000 facilities–half with more than 5,000 animals.

This has been a transition, in essence, from old-fashioned pig pens to vast excremental hells, unprecedented in nature, containing tens, even hundreds of thousands of animals with weakened immune systems, suffocating in heat and manure, while exchanging pathogens at blinding velocity with their fellow inmates and pathetic progenies.

Anyone who has ever driven through Tar Heel, N.C., or Milford, Utah–where Smithfield Foods subsidiaries each annually produce more than 1 million pigs as well as hundreds of lagoons full of toxic shit–will intuitively understand how profoundly agribusiness has meddled with the laws of nature.

Last year, a distinguished commission convened by the Pew Research Center issued a landmark report on “industrial farm animal production” underscoring the acute danger that “the continual cycling of viruses…in large herds or flocks [will] increase opportunities for the generation of novel virus through mutation or recombinant events that could result in more efficient human-to-human transmission.”

The commission also warned that promiscuous antibiotic use in hog factories (a cheaper alternative to sewer systems or humane environments) was causing the rise of resistant Staph infections, while sewage spills were producing nightmare E. coli outbreaks and Pfisteria blooms (the doomsday protozoan that has killed more than 1 billion fish in the Carolina estuaries and sickened dozens of fishermen).

Any amelioration of this new pathogen ecology, however, would have to confront the monstrous power exercised by livestock conglomerates such as Smithfield Foods (pork and beef) and Tyson (chickens). The Pew commissioners, chaired by former Kansas Gov. John Carlin, reported systemic obstruction of their investigation by corporations, including blatant threats to withhold funding from cooperative researchers.

Moreover, this is a highly globalized industry, with equivalent international political clout. Just as Bangkok-based chicken giant Charoen Pokphand was able to suppress investigations into its role in the spread of bird flu throughout Southeast Asia, so it is likely that the forensic epidemiology of the swine flu outbreak will pound its head against the corporate stone wall of the pork industry.

This is not to say that a smoking gun will never be found: there is already gossip in the Mexican press about an influenza epicenter around a huge Smithfield subsidiary in the state of Veracruz.

But what matters more (especially given the continued threat of H5N1) is the larger configuration: the WHO’s failed pandemic strategy, the further decline of world public health, the stranglehold of Big Pharma over lifeline medicines, and the planetary catastrophe of industrialized and ecologically unhinged livestock production.