The Great East Japan Earthquake and Tsunami, and accident at the Fukushima Daiichi nuclear power plant that occurred on March 11, 2011 have had dramatic impact around the world. In response to this massive disaster and its tragic consequences for people’s lives and environment, the people of Japan are trying to take steps towards recovery.

Meanwhile, the nuclear power plant is still unstable and workers are forced to continue working in life-threatening conditions. As the radioactive contamination spreads, many people including children are forced to suffer from prolonged radiation exposure, unable to evacuate due to lack of support from the government.

In Fukushima, radioactive material has been found in mothers’ breast milk and children’s urine: evidence that peoples’ lives, including the lives of future generations, are being threatened.

Following the accidents at Three Mile Island and Chernobyl, the accident at Fukushima has again reminded us that once nuclear technology gets out of control, it is a threat that can exceed human capabilities and cross international borders.

Breaking away from the “safety myth” promoted by the nuclear establishment to convince people of the safety and necessity of nuclear power, it is clear that every step in the nuclear chain (including uranium mining, nuclear tests, accidents at nuclear power plants, as well as disposal and transport of nuclear waste) has created Hibakusha – people who suffer from radiation exposure (a word that was first used for the victims of the Hiroshima and Nagasaki atomic bombing). The rights and lives of these Hibakusha have been ignored for the sake of national security and economic profit. Today in Fukushima, the mechanisms of state and industry are being given priority over the health and safety of the people, as demonstrated by the Japanese government’s raising the “safe” level of radiation exposure to twenty times its previous level, including for infants. As a result, residents in some areas are effectively condemned to suffer continuous exposure to high levels of contamination that would have made them eligible for evacuation from Chernobyl, but in Fukushima they do not qualify for any such assistance.

It is vital that we do not keep making the same mistakes. It is now time for humanity to put an end to the nuclear age that started with Hiroshima and Nagasaki. It is time for humanity to respect life, and move towards a sustainable society in which humankind coexists with nature. It is our responsibility to pass on a future of hope and dreams to our children and grandchildren, not the nightmare of radiation containment. Breaking away from nuclear energy goes hand in hand with nuclear weapons abolition, and will contribute to world peace. It is time to bring an end to the nuclear age, which has solely focused on economic profit, has been the catalyst for many wars and potentially holds the seeds of humanity’s destruction.

The movement to end nuclear power is spreading rapidly around the globe, with particular momentum gained in parts of Europe, notably in Germany and Switzerland. However, many governments worldwide continue to give priority to nuclear energy without considering its risks and consequences.

In Japan, well over half the population now supports the goal of breaking away from nuclear power. Decreasing dependency on nuclear power received cabinet approval. However, many people question whether it is practically possible to bring nuclear power to an end. Putting an end to nuclear energy will indeed require determination, as well as clear and innovative plans for viable alternative energy sources.

Seeking support and inspiration for alternatives on a global scale, we will hold the Global Conference for a Nuclear Power Free World in Yokohama, Japan on January 14-15, 2012.

This conference will create a venue for people from all around the world to gather in Japan and respond to the reality of Fukushima. At the same time, we will bring together the voices of people who suffer from radiation exposure all around the world, whether by nuclear power or nuclear weapons – in other words, Global Hibakusha – and learn from each other’s experiences, thus illustrating the human and environmental consequences of the nuclear chain.

Combining the experiences of countries around the world, the conference will also aim to demonstrate that it is realistically possible to create a society that is not dependent on nuclear power. Whilst creating a road map for the safe removal of existing nuclear power plants, we will present alternative policies based on renewable energy and propose action plans that can be implemented by Japan and other countries around the world.

This conference will be a space where local and international experts, activists, and concerned citizens can share ideas, experiences and expertise with the Japanese people on how to deal with their reality, and together develop projects and proposals for actions in their daily lives, workplaces, regions and educational institutions. It will also seek to encourage collaboration between citizens and the United Nations and other international organizations, governments all over the world, local authorities, corporations, universities and schools, non-government organizations and civil groups, thus building a network across borders to create a nuclear power free future.

We ask for your participation and cooperation.

*A group visit to Fukushima prefecture will be planned for immediately prior to or after the Conference.

1.      Fukushima – Raising common global awareness about what is happening in   Fukushima

4.      Global Hibakusha – Realizing the harmful effects of radiation and working towards solutions for people suffering from them

Exhibition on natural energy from around the world

Other exhibitions that people can enjoy visiting even if they do not attend the main assembly.

*The Conference will be broadcast globally via the Internet.

The Conference will be planned and implemented by an Organizing Committee made up of the following six organizations: 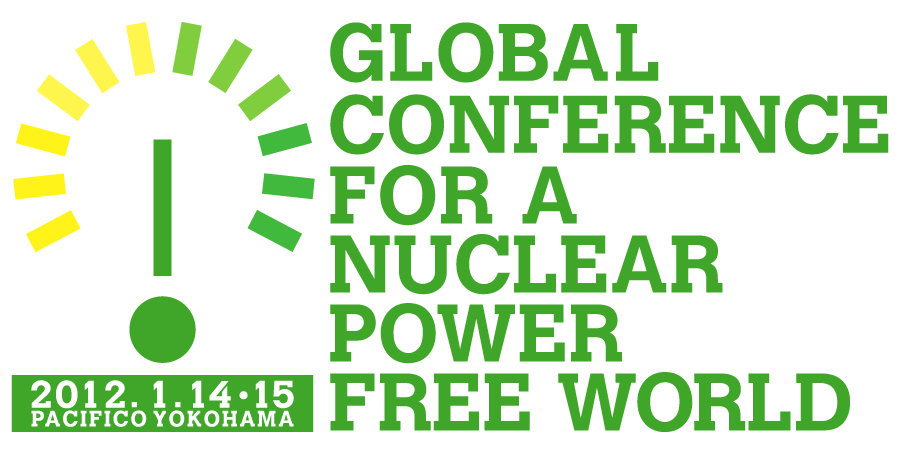 Now is the time to change. Let’s leave nuclear pow …

I can hear cries. It is the outcry of an atom bein …

This important event is a turning point in history …

Electricity used at the “Global Conference for a Nuclear Power Free World” is provided by Green Power generated by biomass power donated by Energygreen Co., Ltd.
*The amount of Green Power used is 15,000kWh.
■What is “Green Power Certificate”
Electricity made from renewable energy like solar and wind power has “environmental value” such as energy conservation (reduced use of fossil fuel) and reduction of CO2. This is called “Green Power (GP)”. Through separating “environmental value” and “electricity value” and trading them as certificates (Green Power Certificate), electricity used can be recognized as using GP generated by renewable energy.Certification service for GP is provided by the third party institution “The Green Energy Certification Center” at the Institute of Energy Economics in Japan.