By Ashely Bates, reprinted from her Dispatches from Gaza blog with permission

(Ed’s note. The spreading of the unarmed protests for real democracy to Gaza shows that the tactic is working. And if it works people will want to try it, in ways that defy stereotypes of “violent” Hamas-controlled Gaza. The only difference is that Israel can get away with a harsher response in Gaza so paying attention to stories like this is all the more important.) 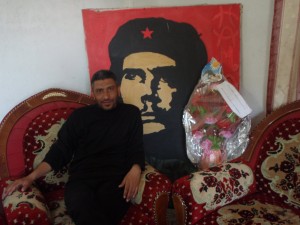 In August of last year, I observed the weekly protest in Bi’lin, a West Bank village where the security fence under construction by Israel separates farmers from their land. As they had every Friday for more than three years, Palestinians, left-wing Israelis and international activists marched towards the fence. Kids at the front of the group threw stones at the Israeli tanks, who replied with tear gas, skunk canons and rubber bullets. It was a sobering and unpleasant experience, but I never feared for my life.

Bil’in is one of the few places in the Palestinian territories where protesters have won victories in the Israeli courts. In September of 2007, the Israeli Supreme Court decided that the wall created “undue hardship” in Bil’in and must be rerouted. The IDF began carrying out the court’s demands last month, but declared Bil’in a “closed military zone” and forbad internationals from entering Bil’in on Fridays. 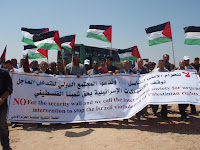 Today I observed a Bil’in-inspired demonstration the buffer zone near Beit Lahiya—but instead of skunk canons and tear gas, Israeli troops immediately fired live ammunition to disperse the 100 or so Palestinians and ISM activists. No one was injured and the gunfire was aimed at the ground, but it was a terrifying experience. Protests like this have happened every week for the past two months and are attracting a growing number of participants from across Gaza.

I shared lunch with the organizer of the protests, Saber Al-Zaaneen, his wife and three young children. Mr. Zaaneen, a self-declared “left-winger” chose a gigantic picture of Che Guevara as the central decoration in his living room. (Most Gazans chose a picture of Yasser Arafat or Sheik Ahmed Yassin, the quadriplegic founder of Hamas.) He said he admired Guevara for “starting an international revolution against oppression.”

As we sat down, Mr. Zaaneen extended his hand. “You are Israeli. I am Palestinian,” he began. “No,” I interrupted, a bit startled and confused. “I am not Israeli. I am American.” He smiled kindly. “This is just an example. I want to have you in my house to drink tea. I want us both to say to our governments that we can live together in peace.”

After this awkward introduction, Mr. Zaaneen shared some of his life history. He studied sociology at the Islamic University of Gaza, has never traveled outside Gaza, and was a Fateh police officer before Hamas seized control of Gaza in 2007. He has hosted Israeli journalist Amira Hass in his home and corresponds with left-wing Israeli parliamentarians. Mr. Zaaneen is among about 100,000 former Fateh police officers who still receive their salaries from the Fateh government in Ramallah, even though he cannot work as a police officer under Hamas rule. 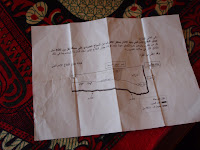 In July of 2008, Apache helicopters dropped fliers (see picture) warning Palestinians that they were not permitted to go within 300 meters of the border. Mr. Zaaneen knew that Israeli soldiers had shot at people and destroyed farms and houses within one kilometer of the border. Feeling that Israel would continue encroaching unless Palestinians resisted, he began organizing non-violent direct actions in the buffer zones, such as accompanying farmers as they tended their fields and searching for bodies of Palestinians killed by Israeli troops and left to rot.

During and after the Gaza War, Mr. Zaaneen dropped his plans for larger-scale demonstrations. However, he was inspired by developments in Bil’in. “I wanted to experiment with that strategy in Gaza,” he said. “The strength of these demonstrations is that they attract international activists and journalists to see what’s really happening.”

On January 9 of this year, a new flier arrived from the Apache helicopters telling Palestinians not to go within 800 meters of the border. This reenergized Mr. Zaaneen because he “wanted to send a message to Israel that this is Palestinian land and the farmers are not leaving. They bring money only from working the soil.” He visited universities and community organizations, and ultimately rallied a broad base of support. The transportation expenses and equipment are funded by private individuals; he receives no money from Fateh or Hamas.

People of all political stripes are welcome at his demonstrations, which now occur five days per week at border areas across Gaza. He calls his organization the Local Initiative Against the Buffer Zone. Every demonstrator must not bring weapons and must commit to non-violence. “I don’t resist because I want to die,” he said. “I resist because I want freedom, land, education, opportunities, no occupation. This is the message of our movement. We want the whole world to know why the Palestinian people resist.”

Ashely Bates is a freelance journalist reporting from Gaza for the first time. She speaks Arabic and previously lived in Jordan as a Peace Corps volunteer. She currently serves as Program Director at Hands of Peace, a dialogue camp for Israeli, Palestinian and American teenagers.

UPDATE: Israel’s army attacked  the group’s unarmed protest again, according to the Palestine Telegraph. “Israeli occupation forces opened fire today toward a peaceful demonstration in Rafah against the Israeli buffer zone in the Gaza-Israel border, no injuries were reported.”

TokyoProgressive supports and participates in projects of like-minded people and groups directly (technical, editing, design) and not-so directly (financial or moral support). Likewise, we also welcome contributions by readers that are consistent with promoting social justice. If you have a project you would like help with, or if you would like to submit an article, link, or report on a protest activity, please contact us here.
eget commodo dapibus nec vel, mattis Phasellus ultricies id sit Praesent